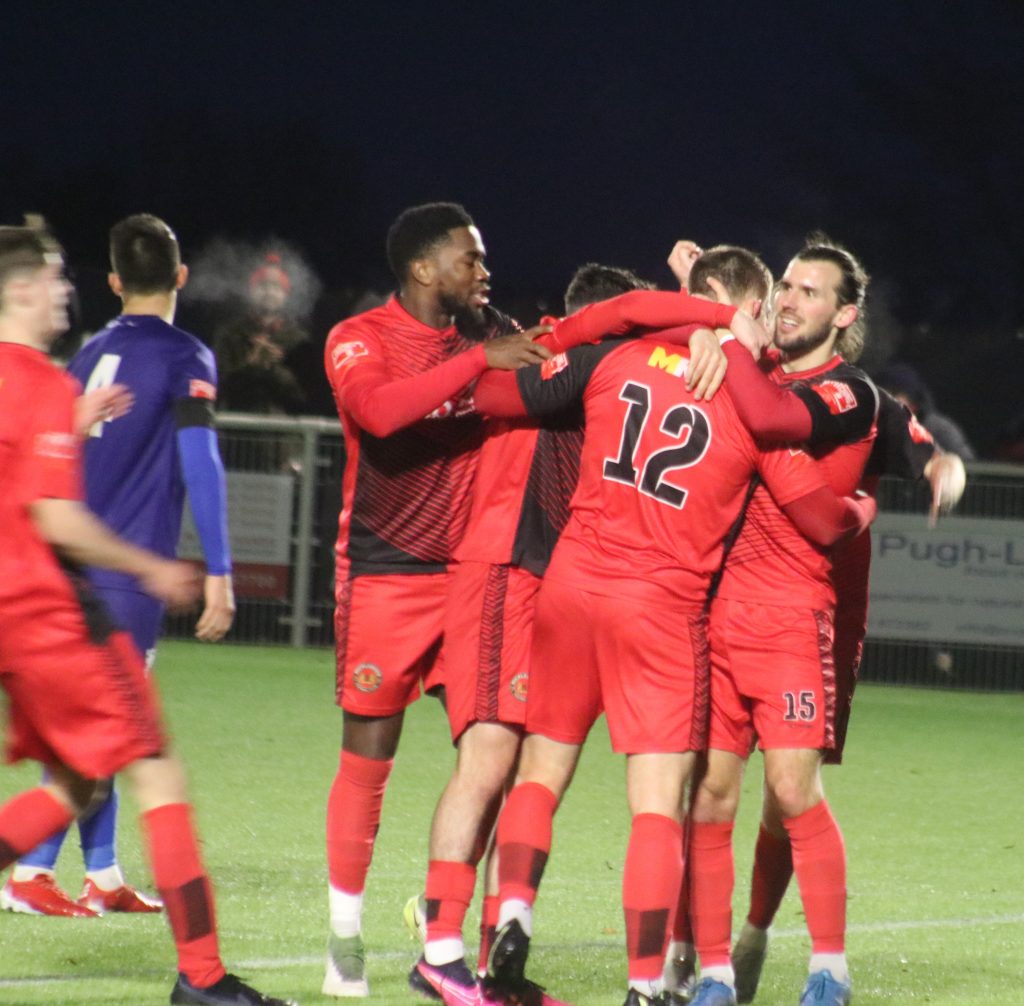 Having taken all three points on our visit to Ilkeston earlier this season, hopes were high of completing the double.

Mickleover were without Andy Dales with a groin strain and Mason Warren, serving the first of his three-match suspension.

In the opening couple of minutes Trueman put a cross in from the right, just missing Reeves head, before Campbell had a shot deflected wide for the visitors after six minutes.

Scott then sent Reeves on a run down the right, but although the cross found Beavon, his attempt to move forward was thwarted.

Ilkeston’s threat began to grow and Campbell managed to find Ward, who then unsuccessfully tried to chip Hedge. But Tomlin managed to jink his way through to the edge of the box, before he was stopped.

Mickleover had a free kick after 12 minutes and the ball seemed to bounce around the Ilkeston area for a while. There were lots of slight touches, but no one managed to get a shot in.

Ward then earned a free kick for the visitors after an ankle tap almost sent him into orbit. It came to nought but it was all Ilkeston. Scott was yellow carded for fouling Arlott-John, and fouled the same player immediately from the free kick.

Only a minute later Tomlin followed up an Ilkeston corner, but his header was headed way from goal by Wilson for another corner

Tomlin had a 23rd minute shot blocked by Mann, before Mickleover got a break to earn a corner too. The short kick found Wilson, but his cross had too much pace for the chasing strikers.

Despite Ilkeston’s growing dominance it was still goalless on the half hour, but Dolan at last broke free on the left, cut inside and fired a shot just over the bar from range. But the visitors responded and Mann managed to clear a challenging cross from Delap.

Reeves went close after 32 minutes, as he cut in from the right past skipper Fenton, he got closer and closer relatively unchallenged, until Battersby in the Ilkeston goal, ran out to make a last-minute interception for a corner. Watt came up for the kick, but his header was off target.

Rose was yellow carded for an innocuous challenge and then became the victim himself. As he hit the ground after being felled in the box, the referee allowed play to continue and Ward chased through to score a heavily disputed goal for Ilkeston 0-1.

Only minutes later Scott was fouled on the touchline, already yellow carded Scott was showing red, until the ref’s assistant made her presence felt. Not only was the card rescinded, it was a free kick to Mickleover, with this time protestations from Ilkeston, led mainly by the visitors player manager Ward, who seemed to spend most of the game bending the ref’s ear.

Finally play continued and Reeves almost picked up a long ball, then Campbell latched onto a good cross, but Hedge flew off his line to save at the strikers feet.

Arlott-John then found Campbell again on the Mickleover right, but his shot was just over, before a Sports counter saw Reeves outpace the defence, swing the ball in tight, but as Greaves went for a header, both he and the defender required treatment. The first half finished with Wilson creating space for a weak finish.

Bateman was on for Greaves as they re-appeared for the second half and apart from a 47th minute run from Trueman and Reeves, with keeper Battersby saving, Mickleover began to struggle to break out of their own half.

Bello got free down the right after 55 minutes, but his cross was pushed away by Hedge. The pressure continued with O’Grady finding Arlott-John, but Hedge had it covered gain.

Possession was still in Ilkeston’s favour, but they too struggled to make progress, which allowed Mickleover to finally get back into the game.

Reeves hit the post following corner and the rebound attempt went close too, and after 77 minutes Battersby saved with his feet from another Reeves effort.

Dolan had started to find space on the left apart from an off target header from Fenton, suddenly it was all Mickleover. Arlott-John did manage to beat Scott on a late run, but shot wide, and with five minutes of normal time left, Butler came on for Scott.

Dolan in particular was finishing strongly, having had a run of almost half the pitch before being intercepted on the edge of the box with five minutes left.

It was Dolan again a minute later that crossed from the left. To find an unmarked Bateman, who eagerly smashed home the equaliser,1-1.

Ilkeston had a couple of late corners and a free kick in the five minutes added on, but it was a well-earned point in the end, from what had begun to look a lost cause. 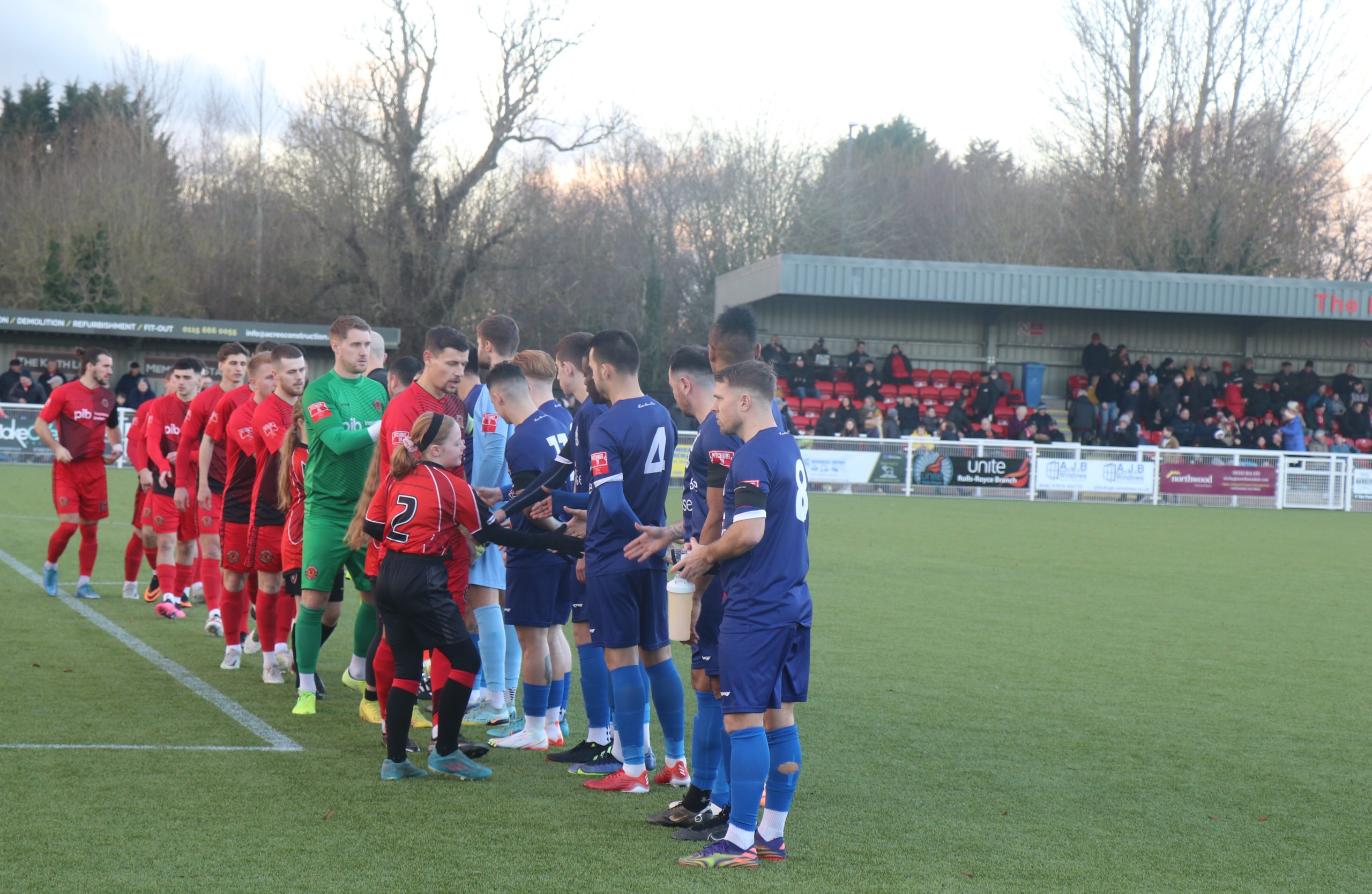 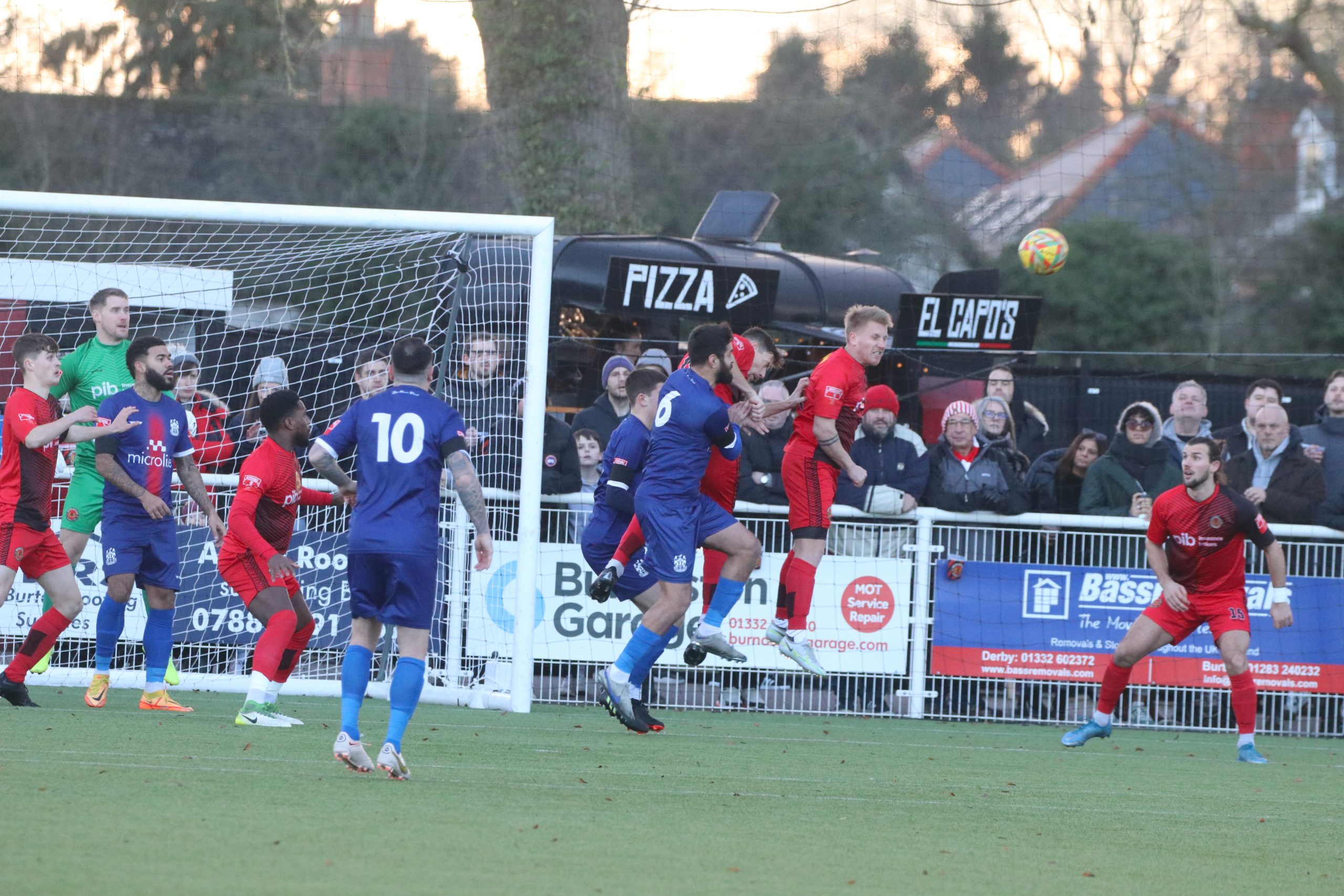 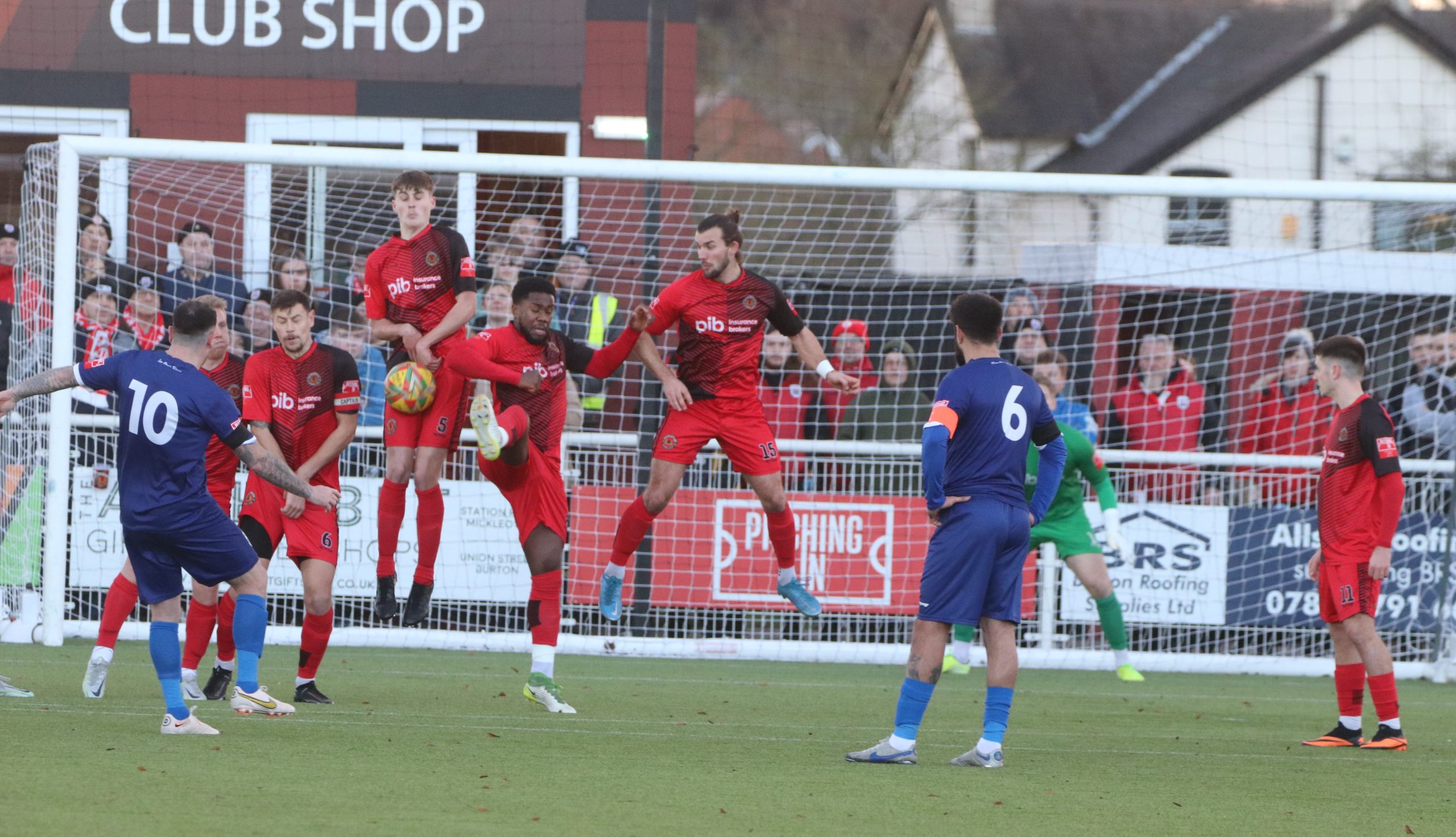 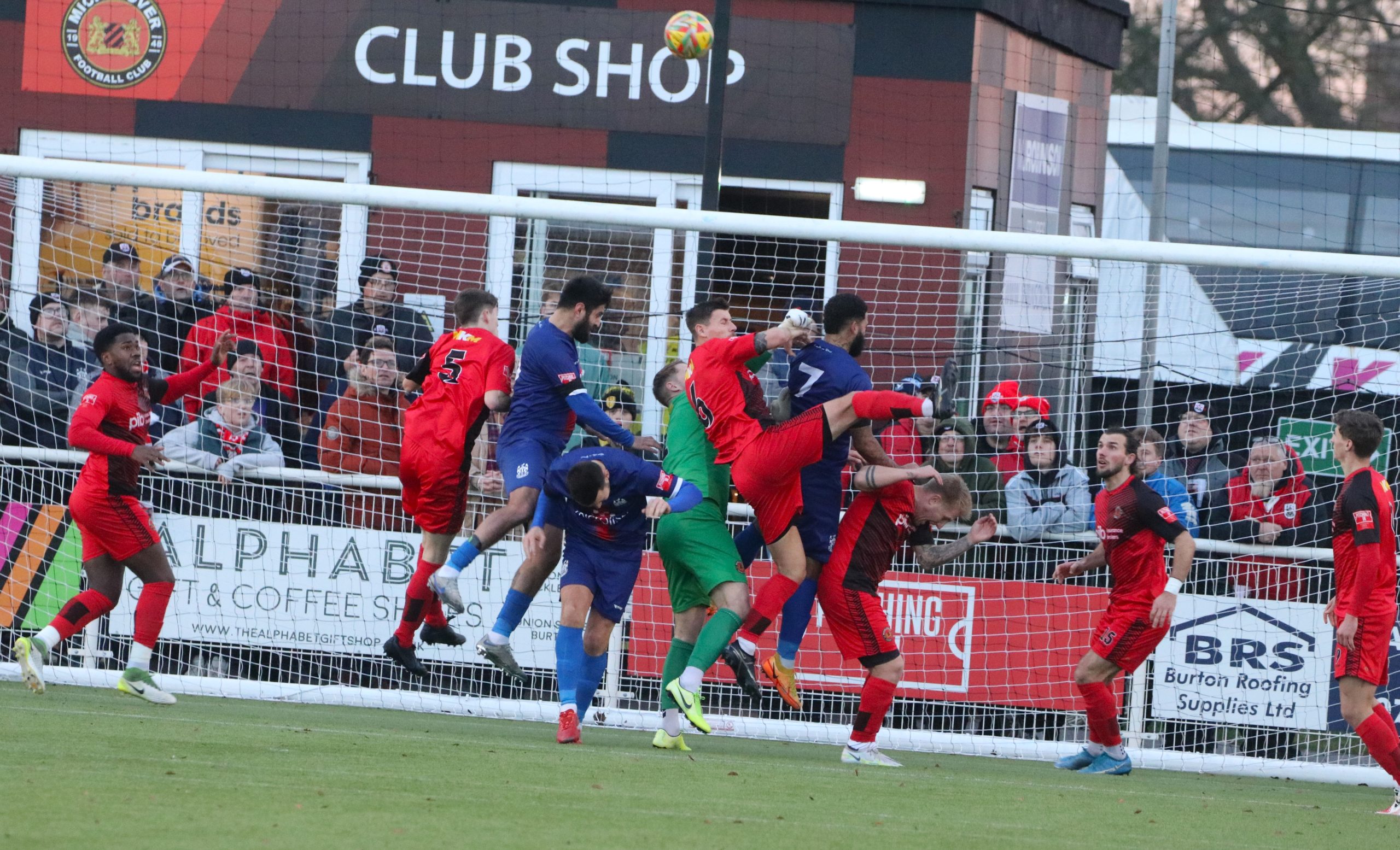