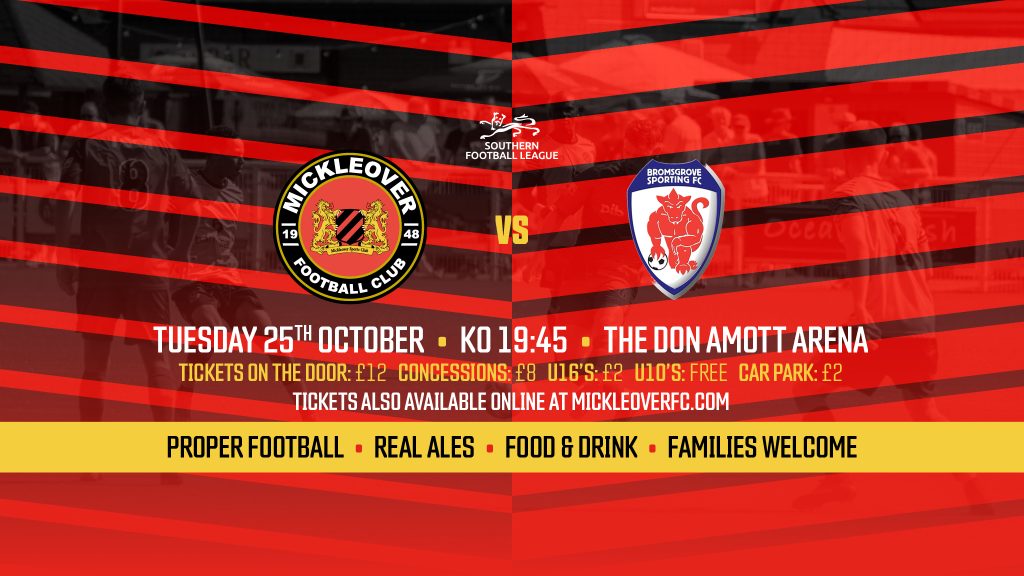 It’s another Tuesday evening matchday with Bromsgrove Sporting visiting the Don Amott Arena. With gaffer John McGrath getting the Mickleover squad up to ninth in the Southern Premier League Central, he is unlikely to make many changes, while his namesake Michael McGrath is trying to stop a run of four straight defeats, having only taken over last week, following the departure of Thomas Baillie.

Bromsgrove went down 1-3 at Ilkeston last Saturday, but the week prior took a 1-7 home hammering from the visiting Leiston. Their last win was on October 1st 5-2 at Kings Langley.

With Michael McGrath becoming player/manager he has handed over his captaincy to Tom Taylor. Centre back McGrath arrived in March, having been without a club since leave Kettering in June 2021.

He has along list of former clubs from a long career, including Redditch, Kidderminster, Worcester, Sligo Rovers and Galway Utd, plus lengthier stays in the Midlands with Rushall, Stratford and Hereford. His first spell at Bromsgrove was 2018, for three months, before moving on again to Redditch, Stourbridge and Evesham.

Taylor is a former striker who became a defender. An ex Shrewsbury junior, he has played much of his football in Wales, with Porthmadog, Caernarfon Town, Pentraeth, Glantraeth, Holyhead Hotspur and Llangefni Town.

He left Bromsgrove in April last year, but returned in December and as well as being the new skipper, he is ever present this season.

Liam Armstrong has recently taken over Ollie Taylor in goal. An ex Bristol Rovers Junior, Armstrong is currently on loan from Gloucester City.

Taylor was signed from Alvechurch last December and has also played for Redditch, while goalkeeping coach Ryan Pratt has also been on the bench.

Jack Byrne is a centre back on loan from Fylde, he has also had loan spells at Barnoldswick and Lancaster City.

Defensive midfielder George Forsyth arrived from Stourbridge pre-season. He started at Kidderminster before moving on to Halesowen, Gloucester, Worcester, Stourbridge and Hereford.

Jack Newell is a defensive midfielder too, a former Northampton Town Junior, he moved on to Barwell, before Bromsgrove signed him in July last year.

Central midfield is Joe Curtis’ favourite position. He started out at Southampton, before joining Brackley on his release. Daventry, Spalding, Rushden & Diamonds, Stratford and St Ives were his next stops, before 10 months at Corby prior to joining our visitors pre-season.

Charlie Shaw was a pre-season signing too and is another central midfielder. He started as a Mansfield Town Junior, before joining Tamworth. He returned to Tamworth after a spell at Walsall Wood and was at Lichfield before Bromsgrove picked him up.

Harvey Gregson is the second of the loanees from Fylde. He’s a midfielder and has been loaned out to Bamber Bridge and Prescot Cables too.

Callum King-Harmes is a former Wales Under 21 midfielder, who started off at Bolton Wanderers. He had a loan at Bamber Bridge before singing for Hednesford on his release and came to Bromsgrove from Sutton Coldfield in August.

Striker Matthew Barnes-Homer is an ex England C International striker, who came from Stourbridge in March. His 18 year career started at Aldershot and had his first spell at Bromsgrove in 2006. His other clubs include Rochdale, Luton Town, Ostersund in Sweden, Macclesfield and Cambridge Utd. He had seven months at Mickleover too back in 2018.

Mikey Taylor was another one of the pre-season signings, returning for a second spell at Bromsgrove. Having started at Worcester, he played for Tamworth, Leamington, Stratford, Stourbridge before his first stay in 2019. After 10 months he left for Tamworth, and after spells at Stratford and Halesowen he made his return.

Dan Sweeney is another striker with a long career behind him. Kidderminster, Halesowen, Stourport, Rushall, Solihull, Hednesford, Leamington, Bradford PA all featured on his journey, before joining Bromsgrove from Redditch in July.

Right back James Fry arrived in the summer too from Stratford. He was a Birmingham City Junior, before being loaned to Kidderminster. He moved onto Leamington, Stretford, Tamworth, before a two-year return to Stratford, prior to his Bromsgrove arrival.

Ryan Edmunds is a midfielder that arrived from Redditch, having joined them in January from Nuneaton, where he spent over four years, since signing from Coleshill Town.

Striker Zidan Sutherland was at Stratford last season and was previously on West Bromwich Albion’s books. He hails from St Vincent & Grenadines and is currently on loan from Colchester.

Defender Ammar Dyer is an ex Port Vale Junior who was released in July last year and is a regular in the Bromsgrove starting line-up.

Miro Pais is a young winger and has been at Bromsgrove for two years.

Kieron Dawes is a former Birmingham City defender. He was loaned to Sutton Coldfield and Hednesford, before joining Coleshill and had spells at Stafford and Redditch before joining Bromsgrove.

Fellow defender Lewis Wright also lists Redditch as a former club, along with Alvechurch and Halesowen.