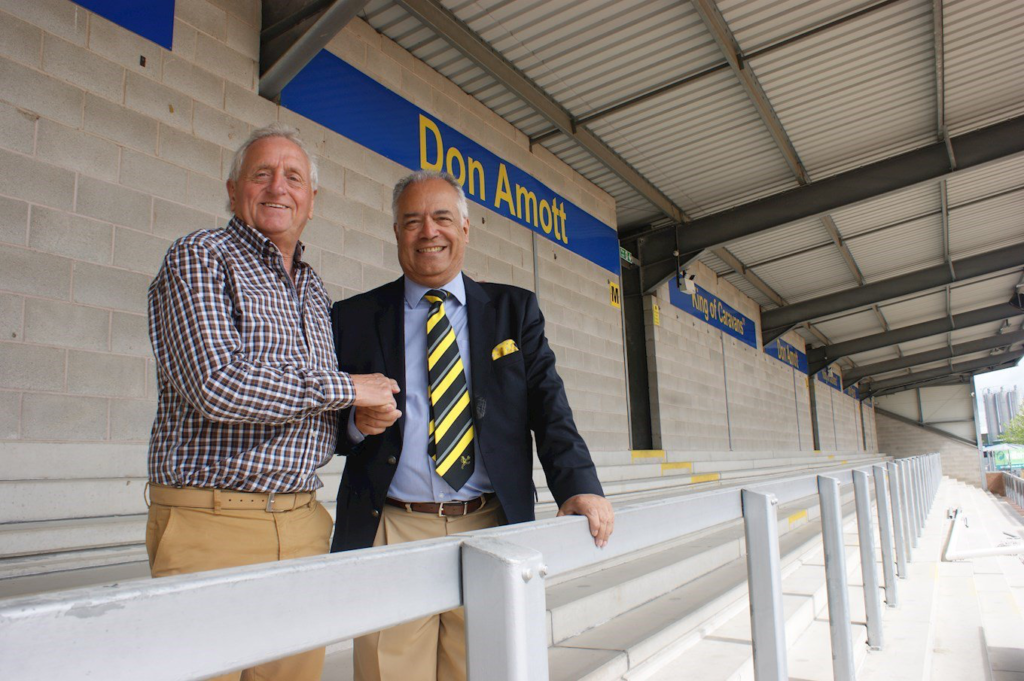 A NEW three-year deal will see the Brewers home end continue to be known as the Don Amott Stand after Burton Albion Football Club has again joined forces with the well-known caravan and motorhome company.

The Don Amott Stand is where some of the club’s most passionate supporters like to watch games at the Pirelli Stadium and the new deal continues the long-standing relationship between the club and the Hilton-based firm.

The business was founded by Don Amott Senior in 1963, when he was a toy manufacturer’s agent who ventured into the caravan industry by hiring out holiday homes on the east coast. During the winter season he took his caravans to his toy warehouse – a disused railway station at Egginton Junction, where the intention was to refurbish them ready for the new season but an interest from passers-by gave him the idea that was to spark one of the industry’s greatest success stories.

Mr Amott, known to his customers as ‘Uncle Don’ changed the face of caravan retailing. Bulk buying enabled him to offer competitive prices – unheard of in the industry until then.

On leaving school in 1965, Don Amott Junior joined the company and was soon contributing to its growth and the important position it holds in the sector today.

Now, Don Amott’s Leisure Kingdom offers more than 50 years’ experience and one of the widest selections of leisure vehicles, including motorhomes and caravans, in the East Midlands as well as an NCC-approved workshop to service and repair your caravan or motorhome. The 48-acre site is open seven days a week.

As well as being a successful businessman, Don Amott is known for his passion for sport and supporting the community.

I love supporting local sports clubs and Burton Albion is very dear to my heart. I am delighted to continue to support this wonderful community football club and, as a football fan, I’m looking forward to seeing the Brewers have another great season in 2019/20.

We are delighted that the West Stand at the Pirelli Stadium, that is popular with our supporters who love to stand behind the goal, will continue to be known as the Don Amott Stand.

There are many shared values between the club and Don and the three-year deal will continue the partnership that is of great benefit to both of us. We are looking forward to working with Don and his company over the next three seasons as we continue the exciting Burton Albion story.