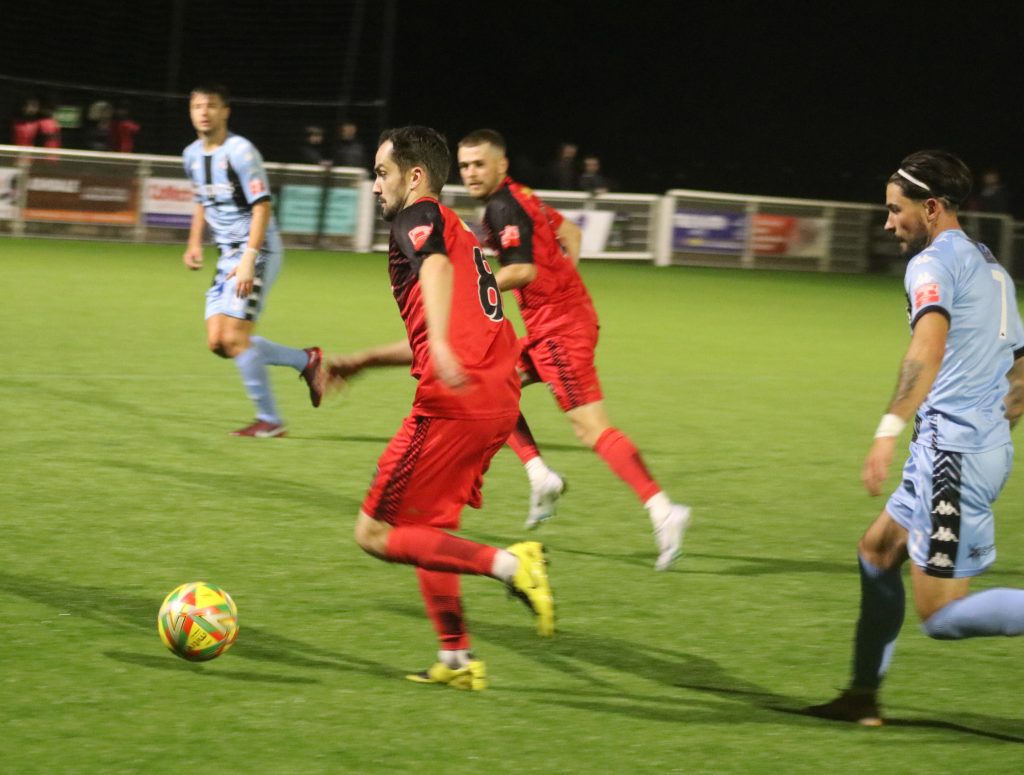 Gaffer John McGrath made two changes to the side that lost at Needham Market, with Milner in for Wilson and Reeves replacing Davidson-Miller to lead the attack.

The opening pace of the game was rapid, but after only five minutes Alex Bradley’s run sent Kyle Finn through. His shot from outside the box was parried by Hedge, but only as far as Ty Deacon who scored from close range. 0-1.

Five minutes later a long and patient build up from Mickleover led to a shot from Dolan, deflected out for our first corner, before Butler headed just over from the following kick.

The home defence easily dealt with a Bradley free kick, before Milner managed to get a shot in that failed to trouble visitors keeper Jas Singh.

But Tamworth were quick on the break and league top scorer Dan Creaney broke through the middle of the defence to fire just over.

The visitors had outpaced Mickleover, but 15 minutes in the tide turned, when a looping pass found Reeves, who easily outran Liam Dolman, before chipping the advancing keeper 1-1.

Tamworth had another free kick headed away by Butler, before Beavon went close again after 20 minutes. His initial shot was blocked by the keepers leg, before his rebound bounced off a defender.

The play had become much more even but Butler miss timed his header from a Tamworth clearance, sending Creaney clear. He cut to his left, fired the shot at Hedge, who failed to hold onto the ball and it was 1-2 after 27 minutes.

The defence failed to settle again following the goal and a general mix up only four minutes later saw Deacon fouled in the box, with Creaney stepping up to take the spot kick, 1-3.

Sports tried to fight back with Beavon seeking out Bennett, but a defender intercepted for a corner. Dales rebound shot from the corner was blocked and the visitors cleared their ranks.

Dolan started to find his pace on the left, but a saving tackle arrived as his shot was straight at the keeper.

But a poor clearance from Hedge put himself under pressure after 37 minutes, from which his charge off the line rescued the situation.

Tamworth had a couple more chances but failed to maximise, with Hedge saving again from a Luke Fairlamb effort in a goalmouth melee, handing the visitors another corner.

Bennett got a cross into the box after 43 minutes, but it was to close to the keeper. Right on half time though Warren found space on the left and from a tight angle and smashed his shot off the post.

Early into the second half Hedge held a cross from Dolman, but after 49 minutes Dales was down in the box and penalty appeals were waved away.

Mickleover had come out with far more determination, and after Dales had a 54th minute shot blocked, Beavon found Reeves five minutes later, but his shot was wide.

Just after the hour mark Dolan was fouled right on the edge of the box, but the free kick came to nought. Soon afterwards Bennett’s run on the right was halted when Fairlamb brought him down and a penalty was awarded.

Warren stepped up and smashed the ball into the roof of Singh’s net and it was game on again, 2-3.

Although Mickleover were on top, Tamworth were still dangerous on the break and a Fairlamb cross beat Hedge, but Watt was on hand to clear from goal.

The referee then missed a clear hand ball in the Tamworth box, but Sports had the Lambs on the run and continued to press forward.

Dolan put a nice ball inside for Dales after 81 minutes, but the shot was wide and then the first substitution was made with Wilson on for Milner.

Tamworth had begun to delay the proceedings excessively into the final 10 minutes, the questioning of every ball, feigning injury, kicking the ball away, but ironically it appeared that Hedge was yellow carded.

Dolan cut inside and fired another shot just over, but the middle was well blocked by the Tamworth defence. Hedge had to deal with a random long shot almost on time, but the referee added five minutes on due to Tamworth’s time wasting.

Finn was booked after appearing to push the ref away as he attempted to speak to him too.

In time added on Butler had a shot blocked from a corner and Dolan had two consecutive crosses easily taken by Singh, who had rapidly recovered from apparent cramp a couple of minutes earlier.

A strong second half performance and probably deserved a point, but the defensive errors proved decisive in the end and it remained 2-3.