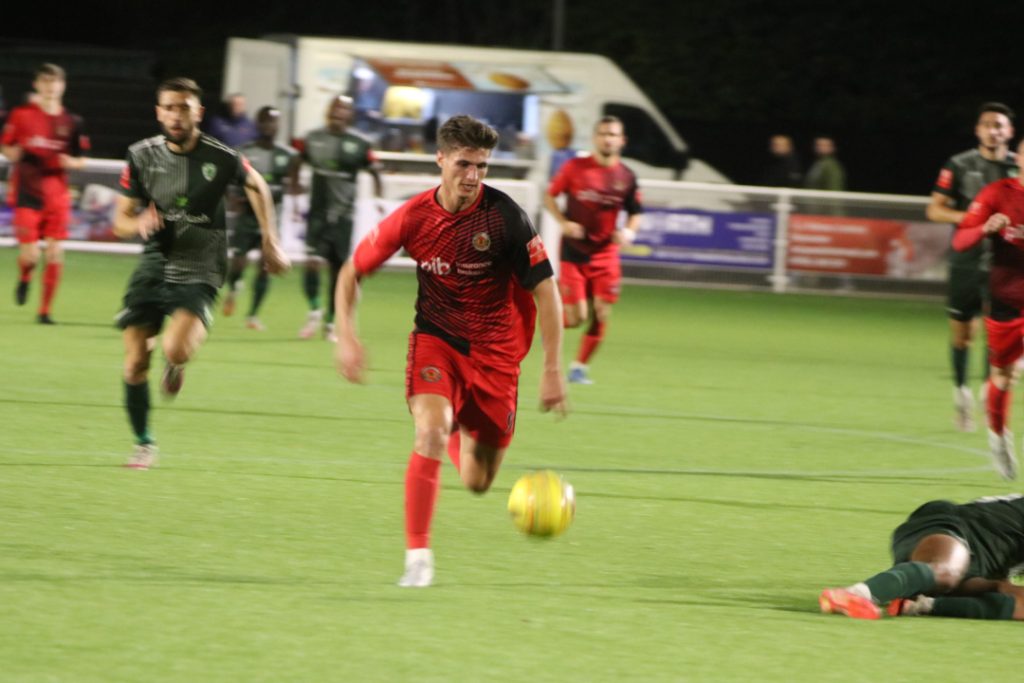 Mickleover continued their climb up the table with a comfortable 4-1 over the visiting Bromsgrove Sporting, with two goals in each half.

After a brisk end to end start Mickleover earned their first corner after eight minutes, when a Reeves cross saw a Dales header deflected for another corner.

But as the game gained momentum in Mickleover’s favour, both Yeomans and Dolan began to push forward, both becoming threats on their respective wings.

After 15 minutes though Reeves had a shot, with Dales following up. Keeper Armstrong did well to keep Dales effort out, but the ball fell to Greaves who lofted it into the back of the net 1-0.

Dolan almost broke through the defence a few minutes later, before the danger was cleared and then Greaves found Beavon in the box, who had the ball taken off his toe as he was about to shoot.

But Bromsgrove then had the first real chance, when a good cross into the box, just failed to connect with Forsyth.

It was Mickleover continuing to push forward though, with Reeves going close. After cutting in from the left, his shot had the keeper beaten, but was inches wide of the far post too.

Reeves was through again after 23 minutes, one on one with the keeper. This time he tried to chip rather than take it around the keeper, but it was deflected away, just out of reach for anyone following up.

Bromsgrove attempted to push forward again, but seemed to hit a wall before they were in the box, with Butler and Mann outstanding in the middle of the Mickleover defence.

After earning a free kick, Edmunds put it straight out of play for Bromsgrove.

Dales had one of his customary long runs on the half hour, but was stopped in his tracks just before shooting.

Only five minutes later Rose picked up the ball well out, took his time, picked his spot and planted a  superb and powerful shot into the roof of the visitors net, giving Armstrong no chance whatsoever, 2-0.

There was increasing bickering among the Bromsgrove defence, particularly from player/manager McGrath, singling out the keeper on occasions and the female Refs assistant.

But it was Armstrong that came to the rescue again after 35 minutes, when Dales broke through, to see his fizzing shot well saved by the keeper.

Hedge had to make a rare save two minutes later, before Mickleover went close again. Reeves and Dales had combined, before Armstrong tipped the final effort over the bar.

Beavon had his shot blocked from the following corner, before Dolan charged back in his defensive role to cut off a Bromsgrove break.

The combination of Wilson with newcomers Greaves and Rose had seen Sports dominate midfield, but almost on half time Bromsgrove had their first real shot of the half, over the bar.

The visitors started the second half with a flourish though, which saw Hedge in action and the defence pegged back for a while.

Taylor had a shot after 49 minutes, but it was straight at Hedge and for a while they were back in the game.

Dales was soon on the break again though, and after a lovely one two with Beavon, his shot was fired over.

Only six minutes later the same pair went close again. Greaves had been upended, but a corner was awarded, then Beavon layed it off for Dales, whose shot was deflected over again.

The pressure was beginning to build again in Mickleover’s favour and there was a succession of free kicks and corners, with Wilson repeatedly feeding the strike force with balls into the box.

61 minutes and it was another Wilson cross from the left, met by Beavon’s head, despite him going away from goal there was enough power to make it 3-0.

There was another short spell of pressure from Bromsgrove after they had begun to make changes, but Dales had another run to earn a corner, before Nunn came on for Reeves.

It was almost number four after 74 minutes, as Beavon beat a defender and cross for Dales, but it was deflected for yet another corner.

Bateman came on for Rose, but Mickleover were down to 10 men. McGrath had kicked Nunn in an off the ball incident, in clear view of the refs assistant. Nunn foolishly retaliated to the player/manager’s game long aggression and pushed him.

The ref gave Nunn a straight red card, while the instigator failed to receive either card or warning!

Taylor pulled on back for Bromsgrove and had a couple more half chances which Hedge coped with.

Warren came on as a late sub, but deep into injury time and with the last kick of the match Dales made it four with a fine solo effort, final score 4-1.

No game this Saturday, it’s back to the Don Amott Arena next Tuesday, when we host Basford Utd.