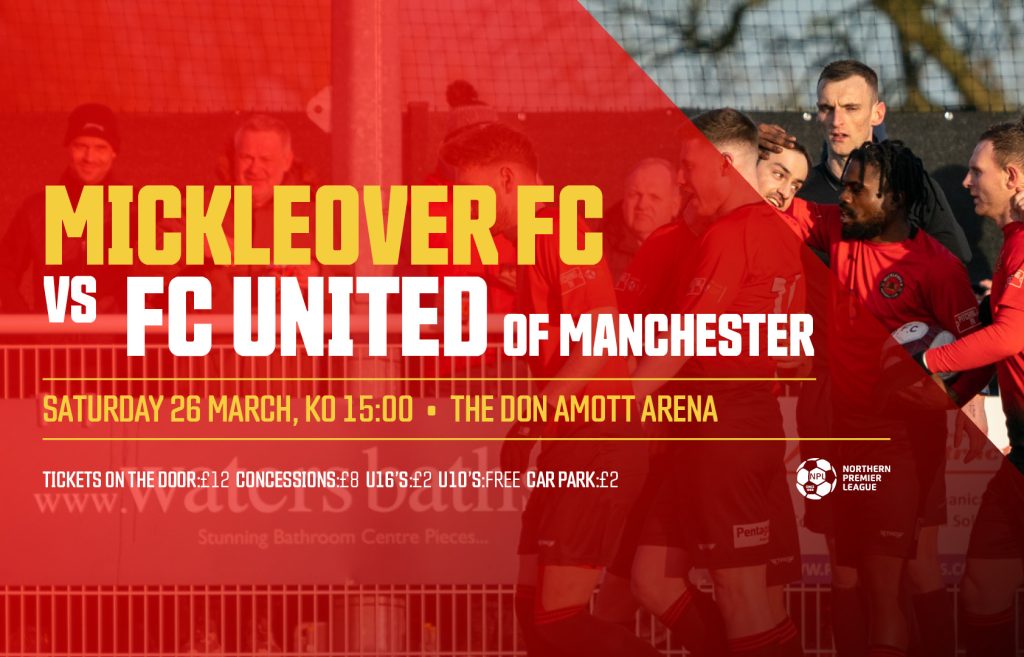 Following their excellent away win at Stalybridge on Tuesday night, Mickleover face FC United this weekend at the Don Amott Arena.

By their own usually high standards FC United have had a poor season, currently eighth in the NPL with only one win in the last six and their last game an away defeat at Basford.

First choice goalkeeper Dan Lavercombe played his youth football with Exeter City and Torquay United. He joined Wigan Athletic in January 2016, but was loaned back to Torquay for a couple of spells, as well as Welsh League Club Rhyl.

He was released by Wigan in the summer of 2019 and joined Fylde, from where FC United signed him in September 2020.

Michael Donohue is a defensive midfielder, who started out at Everton’s Academy. After a loan at Barrow he joined Fleetwood, but was sent out on loan again to Tamworth. In September 2018 he was loaned to FC United, before the move became permanent the following January.

Luke Griffiths is a central midfielder who came back to FC United in October from Warrington, having only left a few months earlier. He was another Bolton Wanderers junior and has also played for Runcorn Linnets, Marine and Prescot Cables.

Playing either centre back or defensive midfield, Curtis Jones is well travelled. From Stockport County’s Youth Team, he joined Glasgow Celtic and Bristol City, before his first senior transfer to Livingstone.

His spell back in Scotland was shortlived and he joined Welsh League’s The New Saints. Quickly moving on again he had a year at Nantwich and then played for Southport and Ashton Athletic, before coming to FC United in July 2019.

Aaron Morris is another centre back who started out at St Helens Town. He came to FC United in summer 2020 from Runcorn Linnet’s, where he played for three years, and has tended to play at right back.

Centre back Jorge Sikora came to FC in February, after being released by Bradford City. He also had a loan spell at Spennymoor at the end of last year.

A midfielder with mainly League Two and National League experience, Jonathan Smith was signed during last summer. He was a youth player at Morecambe.

After loans at Fleetwood and Bamber Bridge, he signed for Forest Green Rovers in 2010, and spent three years there pre their league status.

A spell at York City followed before joining Swindon Town, where he played 48 games and scored three goals, before returning to League Two rivals York.

Moving onto Luton Town where he played 150 games, he was at Stevenage too, before a couple of seasons at Chesterfield preceded his current move.

Paul Ennis is an experienced midfielder with a long list of clubs throughout a lengthy career. After starting at Stockport County, he had a loan at Salford City, then quickly moved on to Stalybridge Celtic, Bala Town, Witton Albion, Northwich Victoria, Colwyn Bay and Guiseley, before a two year stay on a return trip to Stalybridge.

Regan Linney is a striker who was signed from Bamber Bridge in July 2019, having developed through their own Academy.

Midfielder or left back Adam Dodd was a Blackpool junior, who made the first team bench but didn’t get to play. He had loans at Altrincham and Scottish First Division’s Ayr Utd, before joining Chorley on his release. He then had just over three years at Bamber Bridge before being signed in May 2019.

Ali Waddecar moved to FC United after an 11 year spell at Bamber Bridge having made over 450 appearances. The striker had joined Bamber from local football, having previously been at Preston North End.

On loan from Leeds United, winger or midfielder Josh Galloway went to Elland Road from Carlisle in August 2019.

Ewan Bange is a young striker on loan from Blackpool until the end of the season. He has also bee loaned out to Bamber bridge and Telford Utd.

Toby Humphries is a product of FC United’s own youth scheme. The young midfielder has only recently become part of the first team squad.

Mike Potts is another midfielder who started out with Manchester United. After he was released he was at Blackburn Rovers for year, before signing for York City.

Midfielder Chris Taylor started his career at Oldham Athletic. After spells at Millwall, Blackburn and Bolton he was loaned back to Oldham, before signing for Blackpool in 2018.

Further moves have taken him to Bradford and Barrow before he arrived at FC United from Radcliffe last month. He has made over 500 football league appearances and scored 50+ goals.

He has moved on each season spending time with Guiseley, AFC Fylde, Stalybridge on loan, Bradford Park Avenue, Shaw Lane on loan and Curzon Ashton. He was signed from Bamber Bridge in October 2018 and the club captain.

Harry McGee is a recent loan signing from Wigan., but he started his career with Tranmere Rovers.

Striker Joe Duckworth started out with Barnton Under 21’s before joining Winsford. He is a fairly recent signing from Northwich.

Both Lenny Fieldhouse and Josh Brooks are reserve keepers who have been on the bench mainly this season.