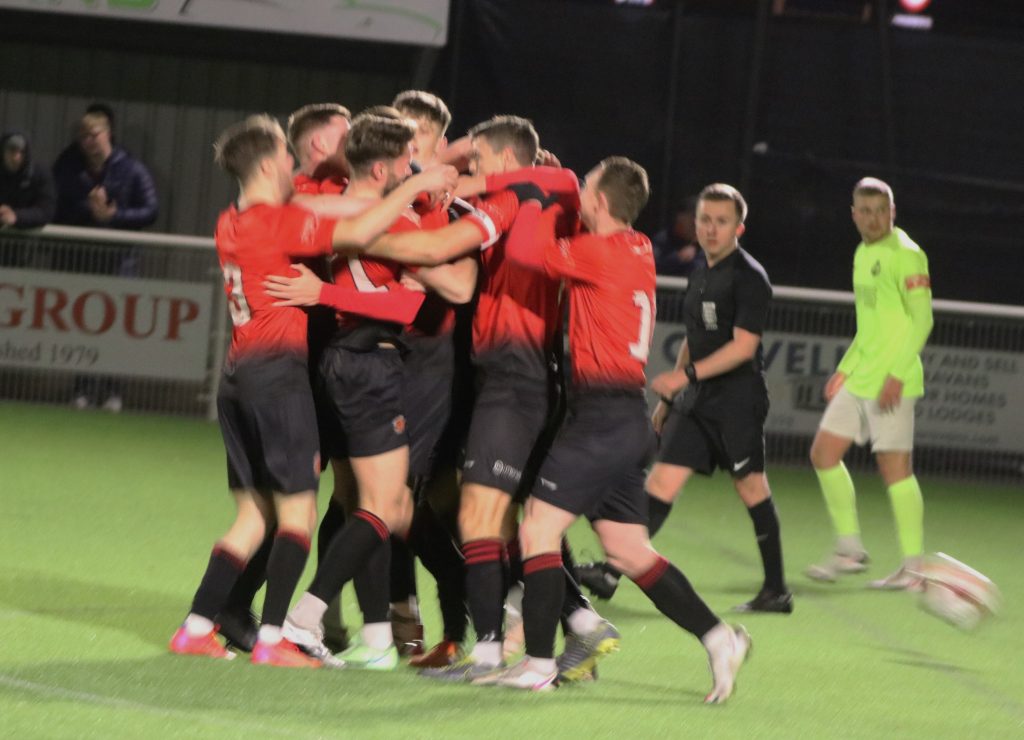 Despite being down to 10 men for most of the second half, Mickleover made it five wins out of five in 2022 with an outstanding performance against aspiring champions South Shields.

In the opening 10 minutes South Shields showed the pace and accuracy in passing that would be expected from a full professional team.

Radcliffe was unlucky to receive a yellow card after an early trip on Alex Kempster, but gradually Mickleover settled to their task and began to play the ball out of their own half.

It was Mickleover that earned the first corner after 11 minutes and after Beavon had found Ravenhill, the young loanee fired just over the bar.

But the pressure was now on the visitors and after a goal mouth scramble, Dales had a shot saved one-handed by Myles Boney, before another corner kept the pressure on.

Beavon again was in the middle of the action, before Boney had to tip a strong shot from Radcliffe out for another corner.

Butler had come up for the kick and rose serenely head and shoulders above the visitors defence to head home the opening goal after 15 minutes. 1-0.

Mickleover continued to pile the pressure on as South Shields struggled to regain their composure, with a Dales cross causing another scramble before Scott’s shot went over the bar. 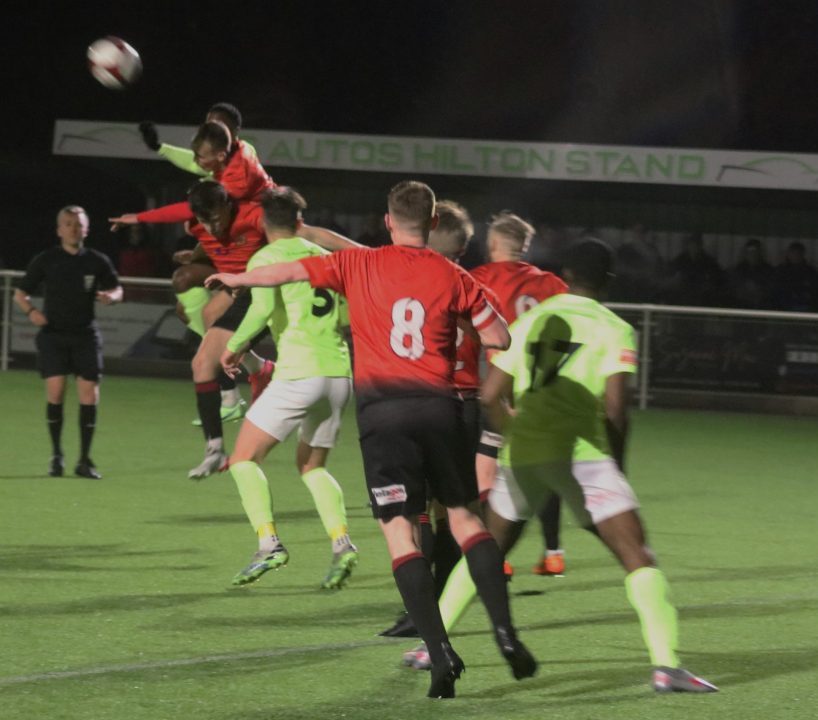 Two minutes later Beavon’s shot was blocked after another telling pass from Dales, before the visitors finally started to push forward again.

A 20th minute free kick was wasted by South Shields, before Mitch Rose saw his attempt go over the bar. Robert Briggs then tried his luck from outside the box, before Watt’s header relieved the danger.

As the completion of the first half hour approached, Hedge pulled off another save, but the following corner found no one on the receiving end.

Nathan Lowe went in the book for a foul on Dolan and Mickleover got another break, with Scott’s cross taken cleanly by Boney in the South Shields goal.

Although South Shields were having more of the possession, their creativity was lacking. Watt and Butler looked solid in the middle of defence, ably supported by Scott and Dolan.

Radcliffe, Wright and Ravenhill were all working hard and made sure that Dales, Beavon and Milner were all in the action, with the strike force playing somewhat deeper than of late.

Mickleover went on the attack again after 37 minutes when a good build up found Milner, who fed Wright for an attempt on goal comfortably taken by Boney.

Lowe had a random shot high and wide for the visitors, just before they had their best chance of the game. Jordan Hunter’s cross found Rose’s head, but it was wide.

With the half time whistle poised Ravenhill was fouled and took the free kick himself, before the whistle blew and Mickleover headed back to the changing rooms with their 1-0 lead intact.

Atwal was on for Ravenhill as they came out for the second half and within minutes of the restart Dolan went close from outside the area before Milner hit the side netting.

But South Shields had started the half with more determination and Will Jenkins put a good ball into the box, but Watt once again had it under control.

Lowe put a free kick into the side netting but as they pushed forward Dales got another break and his cross from the right just failed to connect positively with the advancing Wright.

Dolan then had to clear after Blair Adams had found Lowe, but on 55 minutes centre back Dillon Morse sent Beavon clattering into the perimeter fence, from where skipper Watt was shown a straight red card, for his reaction.

Despite the referee’s over reaction to Watt, Morse only received a yellow card and fortunately Beavon was able to recover after treatment.

So Mickleover had over 30 minutes to play with 10 men, but it proved to be a task that brought out the character and determination of the whole team.

Hedge held a lob from Hunter after 56 minutes and on the hour Dolan had another shot which was well saved by Boney.

But the pressure was building and Butler headed away a couple of telling crosses, before JJ Hooper went close from a Kempster pass.

Hedge was tested again soon after following a goal mouth sort out, but Beavon went close with a header too from an Atwal free kick.

Milner managed to collect a poor clearance from the South Shields keeper, but in haste his shot was wide.

Hooper had another chance to hit the equaliser following a 72nd minute corner by Hunter, but once again Hedge had it covered.

Dolan was next in the book, but Mickleover still had a share of the attacking, Dales whipped past Hunter and played a quick one two with Dolan before his continuing run was intercepted.

But it was Hedge’s goal under more and more pressure, making a diving save from Rose before tipping another effort over the bar.

Lowe skimmed the bottom of the post with another attempt, but the goal kick then gave Mickleover some respite from the ongoing onslaught.

With 10 minutes left Davidson-Miller came on for Wright, but with the clock ticking down the visitors passing had starting to go awry and they were hurling themselves to the ground seeking free kicks.

The referee fell for the trickery but fortunately it had no affect on the outcome.

But it was so close to a second goal for Mickleover when in the final seconds Beavon picked up a loose ball and let loose a rocket shot which Boney did well to tip over.

So after extensive time added on it was a magnificent win for Mickleover, making five in a row as we now look forward to Saturday’s visit to Bamber Bridge.