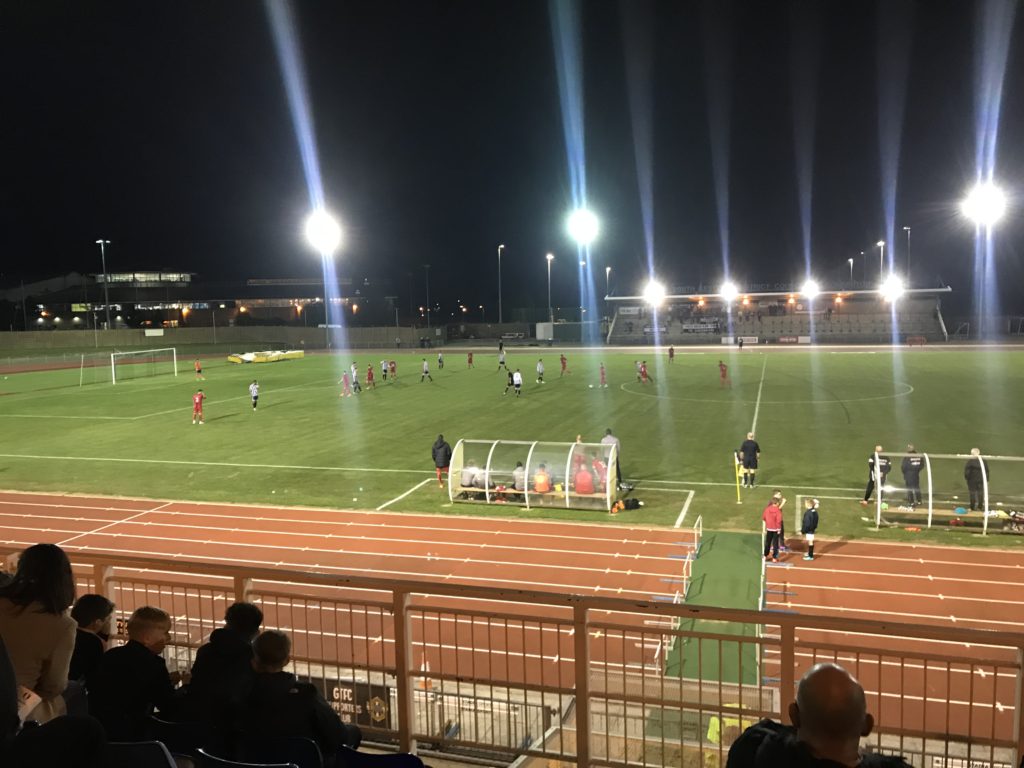 Sports fell to another defeat on Tuesday night as they went down 2-1 to Grantham Town. Two goals either side of half time from Michael Hollingsworth, the first one being a spot kick, saw the Gingerbread men into a two goal lead. However Sports dominated large parts of possession during the game, had a missed penalty by Nathan Jarman and had several chances to score before and after Evan Garnett pulled a goal back in the last minute of normal time. Sports will have gone back into the dressing room at full time wondering how on earth they had lost the game. But it was down to Grantham capitalising on their mistakes and not the same way vice versa.

The Sports team consisted of Lewis King in goal as normal. Jake Scott slotted in at right back alongside Tom Burgin, Tyreece Robinson and Ben Turner. In midfield were John McGrath and Mason Warren with Jimmy Phillips and former Grantham player Curtis Burrows. Up front were the two strikers Evan Garnett and Nathan Jarman. On the bench were Oli Roberts, Will Norcross, Lewis Belgrave, Isai Marselia and Clinton Morrison.

Early on a Grantham corner headed on towards goal was cleared off the line before the rebound was saved by King. Two efforts from Nathan Jarman and Jimmy Phillips then proceeded as Sports got a foot. Garnett and Burrows then had further chances to grab a Sports goal before Grantham Town took the lead from the spot after a Sports defender pulled back a Grantham attacker who went down and the referee awarded the spot kick. Hollingsworth stepped up and drilled it into the bottom left corner leaving King rooted to the spot. However not too long after Sports were awarded a penalty for a similar incident in the opposite box as Garnett was pulled back. Nathan Jarman stepped up and had his spot kick saved in the bottom left corner and tipped round the post for a corner by the Grantham keeper. Jarman would have two further efforts before half time with a header in from a Turner cross before a long range strike went over the bar to signal an end to the first half.

Into the second half and Sports had two further chances either side of a Robinson error which gave Grantham a chance at goal. Phillips smashed an effort onto the bar and Jarman put a half volley attempt over the bar. Curtis Burrows then had two chances to grab one against his former side. First a Phillips crossed was just out his reach then a another cross from the other side was met with Burrows head but was put straight into the keepers hands. Sports were then made to pay for these missed opportunities as Grantham took advantage for a mistake to extend their lead. The ball was crossed low into the box, Robinson tried to clear it but it got caught under his foot and fell out to Hollingsworth who smacked one under King into the net to make the score 2-0 to the Gingerbeads.

Sports reacted by making two substitutions within a five minute period. McGrath was replaced by Roberts and Burrows was replaced by Norcross. Tom Burgin was given a yellow card for a challenge near the centre circle late on. The changes seem to work well as Sports grabbed a goal back just as the game was about to tick into added time. Evan Garnett was played through and managed to slot one past the keeper to get Sports back into the game as five minutes were added. However for all the pressure that Sports put on Grantham they only created one concrete effort to equalise in the 9rd minute of the game. Garnett again was played in 1v1 and just had the keeper to beat. But under pressure from the Grantham defender he strike was at the keeper and palmed away from danger.

That’s as close as they came as the game came to an end which signalled a second loss in a row for Sports however they still sit outside the relegation zone as none of the four teams below them (Lancaster, Marine, Matlock and North Ferriby all failed to register wins. Sports will need to get their league campaign back on track pretty quick but for now their attentions turn to the start of their FA Cup journey as they face a home tie with Step 6 West Midlands Regional League side Haughmond. The side from Shrewsbury caused an upset as they defeated Step 4 side Market Drayton Town 1-0 away from home to set up the tie at the Don Amott Area on Saturday 8th September with a 3pm kick off.