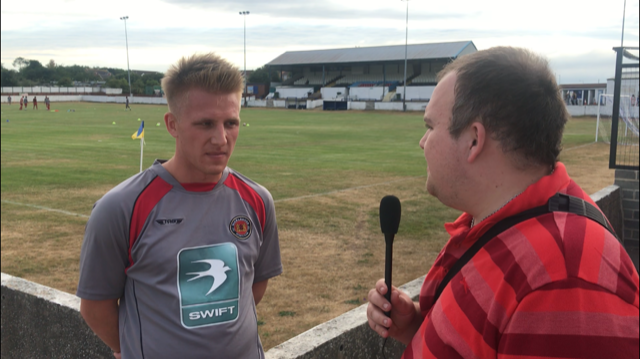 Things are looking up for the Sports as Jake Scott resigns for the club for another season.

The Midfielder signs on the dotted line to join the likes of Nathan Jarman, Pablo Mills and Curtis Burrows to the squad for the beginning of the 2018/2019 season that begins on Saturday 18th of August with the Sports travelling to Manchester to play Stalybridge Celtic at Bower Fold.

I’m over the moon. I didn’t have any intention of going anywhere so I sat down with him (John McGrath) and couldn’t really turn it down.

Jake Scott is on his 3rd season for the club since leaving Shaw Lane in 2016. He started his career at Barnsley at the age of 7 til 2013 where he signed for Worksop Town. He then went to Bradford Park Avenue, Gainsborough Trinity and Shaw Lane but has now comitted his future to the Sports.

Talking about his personal goals for the season, Jake explained:

It’s like everyone else, they always want to go on to better things if they can but I’m fully committed to Mickleover, get a good pre season and hit the ground running for August.

Jake Scott will be continuing to join the squad in training throughout the rest of the pre season period with our next match on Friday 27th of July at Worksop where the hosts Worksop Town will be our competitors (7:30pm kick off) and will be in the squad for our 2018/2019 season starting with a trip to Manchester for Stalybridge Celtic (3:00pm kick off) on Saturday 18th of August