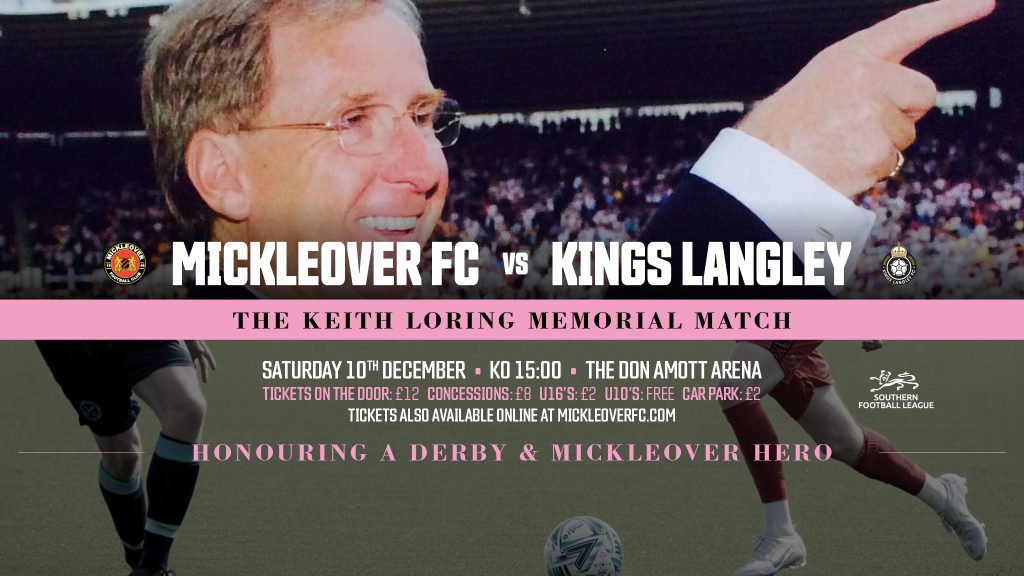 Despite having recently lost our unbeaten run, seventh in the Southern Premier League Central table still leaves Mickleover vying for a play-off position.

Our visitors this weekend are 20th placed Kings Langley, who have had a very up and down season so far. Five wins and 12 defeats and they have secured more points away than at home.

They had their first points and first win in six games when they beat Basford away 1-0 on Tuesday night, their previous success was 2-1 at home to Hednesford on November 12th.

When Mickleover played the reverse fixture in August, it was a 2-2 draw, with goals from Elliott Reeves and James Butler.

Interim manager Chris Winton only took charge a week ago and is a former player for the club and was also assistant at St Albans.

Hafed Al-Droubi has been first choice keeper. He is a former Luton Academy player, who went to Besiktas in Turkey on his release. He moved to Gibraltar with Manchester 62, before coming back to the UK with Chesham.

Further moves have taken him to Harrow Borough, Beaconsfield and Northwood, before joining our visitors from Potters Bar in July this year.

He has played for Hendon, Wycombe, Braintree and Hemel too, before coming to Kings Langley in October after a couple of months at Cheshunt.

Jorell Johnson is captain, centre back and the clubs longest serving player, having arrived from Watford in August 2016. He had previously been loaned to Hemel and St Albans prior to his release.

Fellow centre back James Kaloczi is a newer arrival having signed from Hemel in July. He joined St Albans in 2014, after playing for Harvesters and Boreham Wood, and was then loaned to Wingate, before a permanent move to Hemel. He then alternated between St Albans and Hemel until coming to Kings Langley in pre-season.

Ryan Case is another centre back that started his career at Dorchester. Stops at Basingstoke, Staines and Poole followed, before his travels continued via Eastbourne, Bath City, Gosport Borough, Oxford City, Dulwich Hamlet and Chippenham, before coming to Kings Langley in July, after a year at Hartley Wintney.

Right back Samuel Okoye-Ahaneku was a pre-season signing too from Hitchin Town, while winger Wilson Carvalho is even more recent, having come from Westfield in September.

Carvalho has had a fairly long career which started as a Fulham Junior, before joining Stevenage on his release. Two years later he went to Greenford, but a further year brought a move to Port Vale, where he made eight League One appearances and was loaned to Hemel, Corby and Ilkeston.

Striker Bradley Wadkins arrived in July last year from Chesham, having previously been at Enfield and Slough.

Fellow striker James Ewington only arrived a few weeks ago, after 15 months at Harrow Borough. He has had shortish stays at a host of clubs, starting with Harpenden and moving on to London Colney, Hertford, Welwyn Garden City, Colney Heath, Northwood, Walton Casuals, St Albans, Hampton & Richmond, Wingate and Beaconsfield.

Noyan Tajbakhsh is a striker who has spent most of his career in his native Turkey. Having played for Fenerbahce, Sariyer and Tepecik Sport, he came to the UK with Uxbridge in 2017, before arriving at our visitors pre-season.

Brother Aryan Tajbakhsh is a midfielder, who came from Potters Bar in February. He started at Kentish Town and Northwood before joining Barnet. He then a spell at Maidenhead before moving to Turkey with Antalyaspor, Yolavaspor and Pendikspor, before joining Braintree in 2011.

Centre back Udoka Chima came from Burnley’s Under 18’s. On his release he spent a year with Queen of the South, and came to Kings Langley in October, after a year at Harrow Borough.

Winger James Mulley has many of years of experience, including League Two level. He started with Hayes & Yeading and moved on to Chelmsford before signing for AFC Wimbledon. After a couple of loans back to Hayes and Wealdstone, he went to Braintree. Further moves to Maidenhead, Bracknell and Uxbridge followed, before spending a year at Ware, prior to signing for our visitors in August.

Defender Alex Lafleur is in his second season with our visitors, since arriving from Beaconsfield. He has played for Moneyfields, Salisbury, Gosport Borough, Chalfont St Peter, Edgware Town and Wealdstone.

Midfielder Cain Keller scored the winning goal against Basford on Tuesday night. He is a former Stevenage junior and has played for Hendon, before arriving at Kings Langley from Biggleswade in February.

Deago Dunbar-Bonnie is a left back and former Orient junior. He joined Maldon & Tiptree on his release in September 2021 and was a pre-season signing.

Midfielder Finlay Macnab started out as a Brentford Junior, before joining AFC Wimbledon. After loans at Leatherhead he was released in October last year and came to Kings Langley after a brief spell at Welwyn.

Will Hoskins came to our visitors in January 2020 after a couple of years out of the game. After starting at Rotherham he has over 150 league games under his belt, with 50 plus goals, having played for Watford, Millwall, Nottingham Forest, Bristol Rovers, Brighton, Sheffield Utd, Oxford Utd and Exeter, before going non-league at Hemel and a spell in Australia with Northcote City. He was capped by England at Under 18,19 and 20 too.

Midfielder Jordan Parkes is a player coach having arrived  from Billericay in November 2019. He started at Watford and after loans at Brentford, Barnet and Stevenage, he moved permanently to Barnet, making over 50 League Two appearances.

After loan at Farnborough he then joined Chelmsford and has also played for Hemel and Ebbsfleet, and is an England Under 18 and 20 International.

Alex Tokarczyk is another goalkeeper who has been in the squad this season, he has had spells Scottish League with Montrose and Falkirk. He also spent time at Crystal Palace, after starting out at Hayes & Yeading.

He moved on again to Walton Casuals and St Albans, then briefly returned, before going to Beaconsfield and St Albans and returning again this season.

Striker Joseph Chidyausku has played for Bradford Park Avenue, Chelmsford, Havant & Waterlooville and St Albans. He then moved to Beaconsfield and Barton Rovers before coming to Kings Langley this season.

Midfielder Matthew Taylor has recently joined the starting line-up and both Giuseppe Delgaudo and Leo Farruch have been on the bench, after time at Tring Athletic.

It’s back to 3pm kick off at the Don Amott Arena for this Keith Loring Memorial match, so if you haven’t got a ticket for Burton Albion v Derby County, come and watch us!