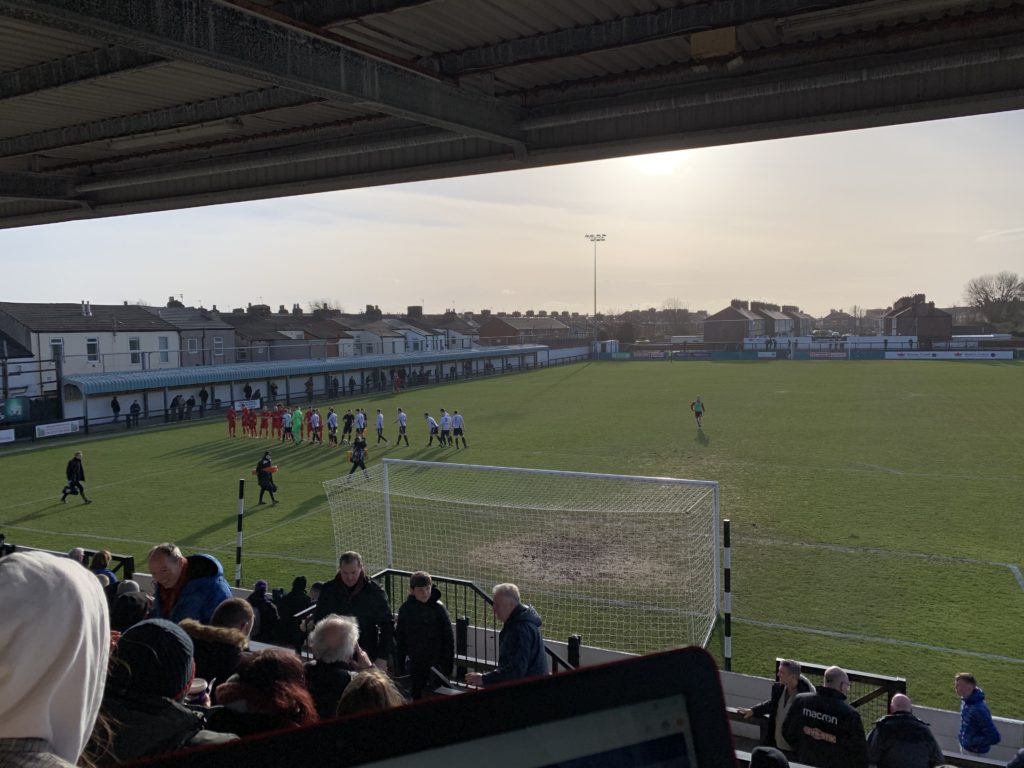 After arriving only 45 minutes before kickoff, you could have excused Sports for making a sluggish start in his crucial relegation battle. However it turned out the complete opposite as a fantastic first half for the Sports had everything but a goal in as Tomas Junek, Jake Scott and Shaquille McDonald all had chances to put Sports ahead at half time. However a dismal second half showing with three unlucky goals from wide positions inflicted another defeat on lowly Sports who remain inside the relegation zone for another week.

Sports named a 4-4-2 formation consisting of Lewis King returning to the starting XI after the return of Callum Hawkins to Burton Albion. The consisted of Jiri Boula, Durrel Berry, Ben Turner and a new signing Joel Bonner made his debut at centre back after joining from Midland League side Loughborough University. The midfield four was made up of John McGrath, Jake Scott, Mason Warren and Jimmy Phillips with Tomas Junek and Shaquille McDonald making up the strike force up front. Sports bench consisted of Jack Walsh, Adam Prusa, Karel Tvorah, Evan Garnett and Kyle Carey.

Sports started off as the better side in the opening stages of the first half with the Marine back four and keeper looking shaky from set pieces that were thrown at them. You have to feel a side at the top of the table would have taken the half a dozen chances that came Sport way but when you’re at the bottom it seems that nothing goes your way. Tomas Junek, Shaquille McDonald and Jake Scott all had excellent opportunities in the first 28 minutes however all either went sailing over the bar or were held onto by the keeper. Marine’s first real chances of the game didn’t occur until the 30th minute of the game when striker Niall Cummins had time to spin on the spout outside the box and fire a low strike wide of King’s left hand post. Tomas Junek was still providing a threat for Sports and a good ball played over to Mason Warren nearly found the former Rotherham United man but the Marine stopper managed to get to the ball first. The Mariners then went straight up the other end and played a ball over into the box in a dangerous area which was well cleared from what was a good counter attack by the hosts. The final chance of any note was a dangerous Jake Scott cross into the box which again caused panic in the Marine ranks but the keeper managed to hold on before any trouble could unfold.

It seemed a completely different Sports team came out of the dressing room in the second half rather than just the one substitution of Evan Garnett for the injured Tomas Junek. Marine were in the ascendency and had an early chance through Steven Irwin but his effort was dragged wide of the right hand post. But it wasn’t long before the Mariners first goal of the afternoon came on the 55th minute. A cross into the box was allowed with no resistance and the ball was headed back across the goal for substitute Craig Carney to poke home on the line to break the deadlock. This was followed by another Sports sub due to injury as boss John McGrath made way for Karel Tvorah. The only real clear cut chance by Sports in the whole of the second period came on the 67th minute was sub Evan Garnett did really well to sprint down the left hand side and managed to cut inside into the box but his strike took a deflection off another Sports body inside the area and went for a goal kick.

That’s as close as Sports got as Marine heeded the warning and took advantage with a second goal on the 74th minute. A free kick from eventual man of the match Steven Irwin crashed off the Sports cross bar and was the Sports defence could only look on as Niall Cummins tapped in from 6 yards out to make it 2-0 to the hosts from Merseyside. Ten minutes later the game was wrapped up through a Ben Turner own goal to make it 3-0. Liam Hymes managed to dribble unopposed as far down the field as the by-line on the left flank and his fizzing cross was scuffed into the bottom corner on the far side by the Sports left back Turner to seal a miserable second half from Sports.

The final Sports change came on the 86th minute was Jimmy Phillips came off for forward Kyle Carey. But the former Coventry United man didn’t really have enough time to make a real impact as the final chance of the game falling to Steven Irwin who did everything in the game but score as his most recent effort smashed off King’s left hand post and away from danger. After an uneventful three minutes of added time the game came to an end to signal a very disappointing away day for Mickleover Sports. After a great start the moral of the story is take your chances when you’re on top in games or it will come back to bite you.