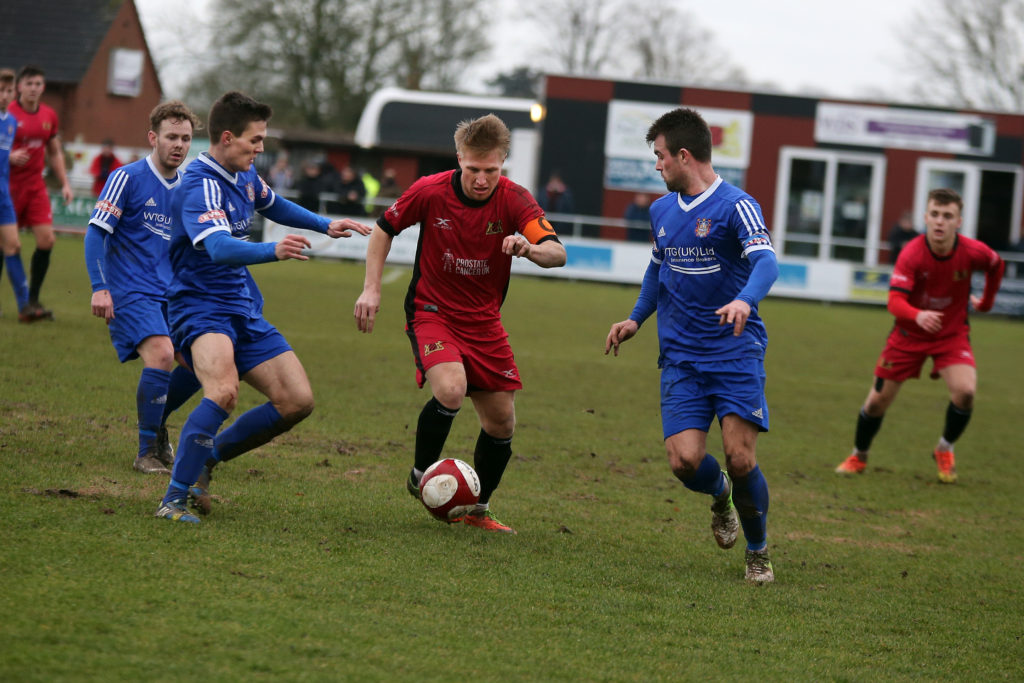 This game only went ahead due to the efforts of a group of volunteers who came down in advance of the game to fork the pitch into a playable condition.

Sports have been without competitive football since January 13th due to a waterlogged pitch, but that has not denied player/manager John McGrath the opportunity to strengthen his squad who has brought in two experienced strikers in Luis Briscoe and Matthew Barnes-Homer along with re-signing midfielder Medi Abalimba.

Mickleover were clearly keen to be back in action after their enforced break The game was end to end in waves but the hosts normal slick game was not as good as it could be with a number of their passing not reaching the intended target, although it was hard to say if this was caused by ring rustiness or a playing surface looked increasingly like Derby County’s old home at the Baseball Ground.

After Lewis King in the home goal made a great interception to deny Nathan Cartman with the match only 4 minutes old McGrath’s men twice had the ball in the back of the net before the half hour mark only to have the goals ruled out for offside. First Barnes-Homer completed a great move on 20 minutes and Dales chipped the keeper with a delightful lob, but in both cases there was little argument that the officials were correct in their decision making.

Briscoe went close in the 31st minute but his shot was blocked. Given the amount of goal mouth action at both ends it was surprising that the half ended goal less.

It only took 6 minutes of the second period for the deadlock to be broken. Neat interplay from Farsley ended with a pass to Nathan Carter who fired home from close range.

Their advantage lasted less than a minute as Pablo Mills restored parity with a powerful header from a Jimmy Phillips corner.

The home side took the lead for the first time on 65 minutes. Briscoe was fouled in the box and referee Steve Darnall had no doubt that it was a penalty.

Barnes Homer took the responsibility of taking the spot kick which though struck with a reasonable amount of power was close enough to McKibbin to parry away from goal. It fell to the inrushing Dales who hit the ball into the empty net from some distance.

Farsley were determined to take something from the game, and after a period of dominance which saw the hosts pushed back into the defensive third of the field for a prolonged spell got their reward with a strike from substitute Luke Parkin in the 87th minute.
The result was a fair reflection on the game which neither side deserved to lose.