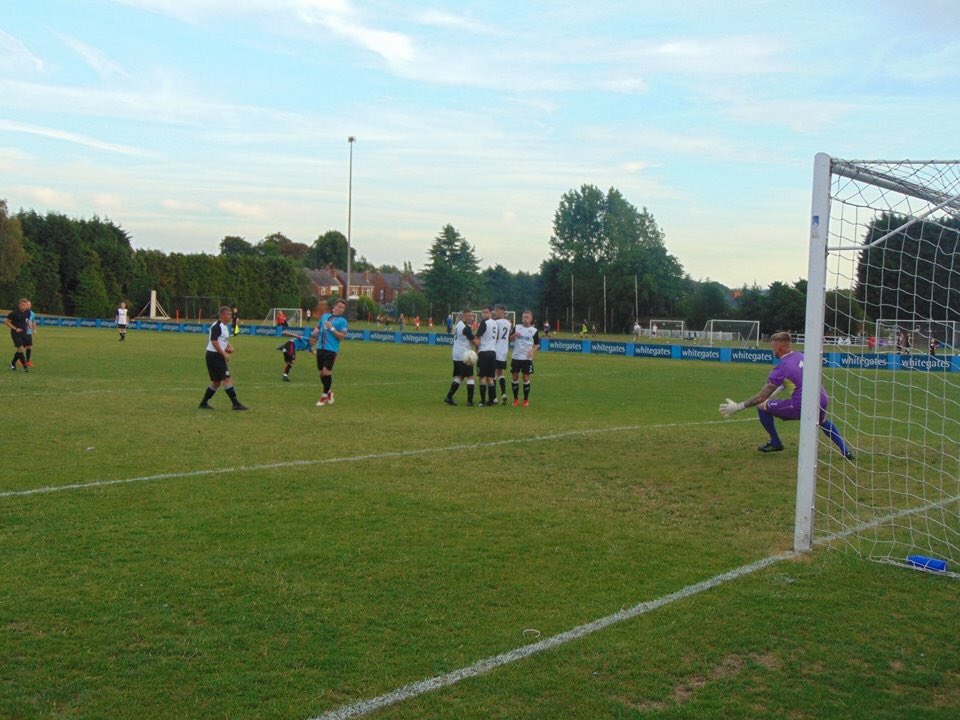 Another day and another Pre-Season victory but Sports definitely had to work for this one and John McGrath side had to grind this one out towards for end as Heanor took the game to Mickleover. Oli Roberts’s stunning free kick in the first was all that separated the two sides in what was a very competitive and entertaining friendly match. But another win extends Sports unbeaten Pre Season with Huddersfield coming to the Don Amott Arena in a week’s time.

The squad members who weren’t playing in previous nights RBL fixture were selected this is fixture. Lewis King started in goal after his cameo against RBL. The back four consisted of Harley Kozluk, Pablo Mills, Trialist and Ben Turner. McGrath named himself in midfield alongside Jake Scott with Niall Doran and Oli Roberts occupying the wide areas. Up front was new signing Nathan Jarman alongside the Trialist from The Netherlands. The bench consisted of four academy players Trialist, Smith, Fatubin and Parkin; however none were used in the game.

Sports had the first chance as a great low cross from Curtis Burrows picked out Jake Scott but the former Shaw Lane man couldn’t quite get enough contact on the ball to get a firm touch and his effort went wide of the goal. Heanor then threatened as former Rocester winger Rob Ritchie-Smith delivered a cross for another former Rocester player Sam Griffiths who fired over the bar. Then shortly after another former Romans striker Oli Roome had an effort put behind for a corner by Ben Turner before the resulting corner was headed over the bar.

Trialist produced a great cross in the direction of Nathan Jarman who just missed the ball going over him as he tried to head towards goal. The ball was then played back in to Trialist himself who managed to bring the ball down, turn and fires a strike that went over the bar just before he was brought down from the resulting challenge but no foul was awarded. But it didn’t matter as three minutes later. Sports were awarded a free kick just outside the area which John McGrath and Oli Roberts both stood over. It was the later who stepped up and struck a fantastic hard and low driving effort into the bottom right hand corner past the keeper’s outstretched left hand. There would be only one more clear cut chance between Roberts’s goal and the half time break as Doran got a shot away after good hold up play from Trialist but it was into the keeper’s hands before he caught the ball at the second attempt after spilling the initial effort.

After the break, with an unchanged side, John McGrath produced a half volley straight for a corner kick but the effort was just over the bar. McGrath then won the ball back from a 50/50 challenge and played in Trialist moments later but his effort was straight into the keeper’s gloves. Jake Scott was then slipped through by Oli Roberts but again Sports couldn’t take the chances as the shot was over the bar again. Trialist then sprinted down the right and played the ball back across goal to the edge of the box where Niall Doran was ready to pounce on it but instead the shot was too high and went for a Goal Kick.

Heanor were pressing Sports really hard and had plenty of moments and half chances to grab an equaliser. But to Sports credit they defended impeccably and had one final chance to score from the counter attack as a great cross over from Ben Turner was slightly deflected into the keepers hands but the Heanor stopper let the ball slip out of his hands and managed to allow Jake Scott to challenge for it but the angle was too tight and the shot instead went over the bar.

That was the last of the major action of the night as Sports could put to bed two more successful Pre Season games over two days where they had scored three goals and not conceded any. Much sterner tests lie in wait for McGrath and his players as they welcome Premier League side Huddersfield Town bring a team down to Don Amott Area next up on Wednesday 8th August with a 7:30pm KO.