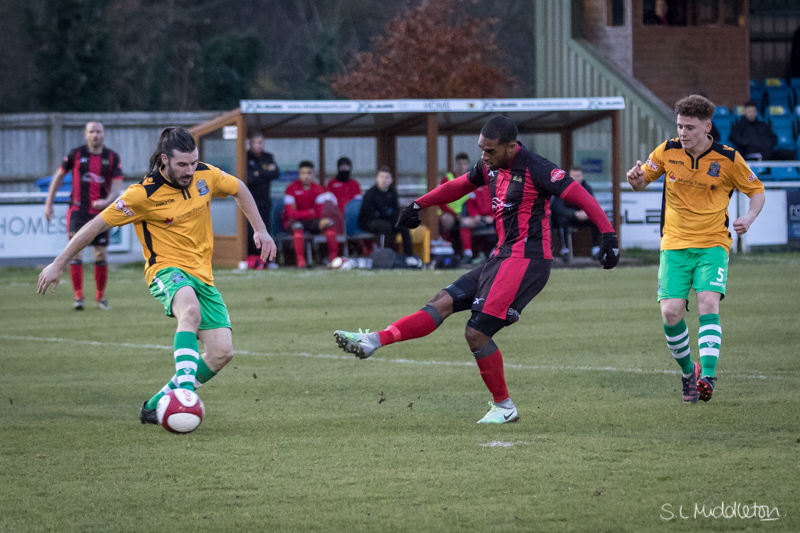 On a bitterly cold afternoon Sports tried to warm their supporters with their attacking brand of football.

They carved out enough chances to win 2 games not one, but it has been symptomatic of the hosts for much of this season that they have not been able to finish what they have started as often as they would like.

Sports welcomed Zeph Thomas back to the starting line up after he missed the previous week’s fixtures while away on international duty with Nevis and St Kitts.

He has been on a hot streak of form of late and showed what he is capable of with two totally types of goal in the first half.

Elliott Ptak had shown his ability going forward from left back after 9 minutes but his finish did not match his approach play while Andy Dales had a sharp effort saved by visiting keeper Calvin Hare nine minutes later.

Dales turned provider after 18 minutes playing a through ball which Thomas was onto in a flash before beating the keeper.

Despite having the large majority of the attacking play it was not until the 40th minute that they doubled their lead. Again Dales was heavily involved in the build up and as Marine struggled to clear their lines the ball ended up with Thomas who poked it home from close range.

A brilliantly struck free kick by player/manager  John McGrath deep in first half stoppage time rattled the cross bar before being cleared.

4 minutes into the second half Thomas had the chance to complete his hat trick with probably the easiest of his three opportunities but only succeeded in under hitting his shot straight into the arms of Hare.

Dales had a great chance present itself to him on 56 minutes but the keeper stretched out a leg and deflected the ball out of harm’s way.

With chances going a begging the visitors felt that there was still a way into the game for them and pulled a goal back through Obi Anoruo who found himself in space with only Eastwood in the Mickleover goal to beat, which he duly did.

Sports kept pressing forward in the closing stages in an attempt to widen the score line, but the two first half strikes by Thomas proved enough in the end to guarantee them the 3 points.