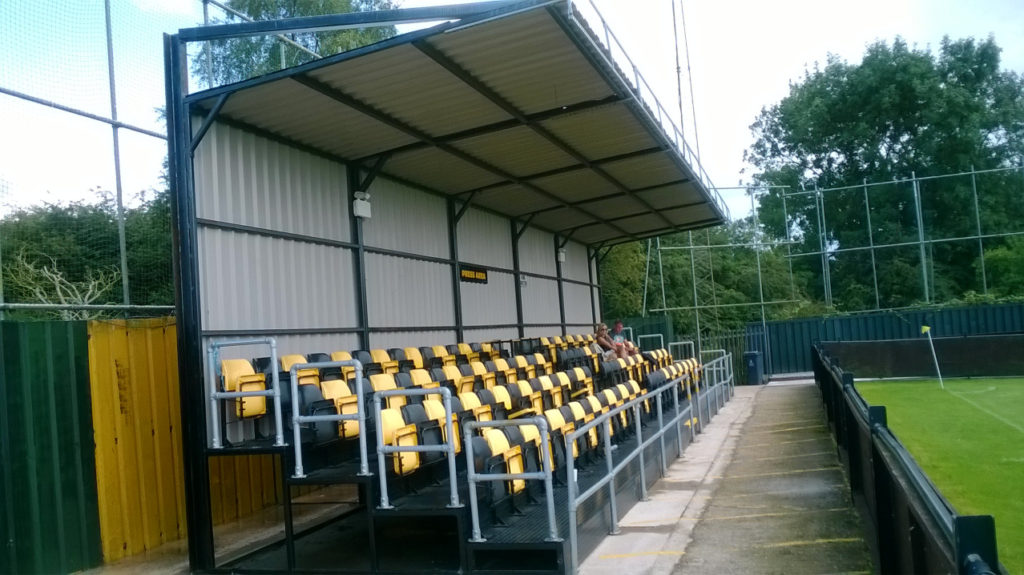 Sports followed up Saturday’s excellent win with arguably their best performance of the season against top of the table, Rushall Olympic.  Their unbeaten December run was halted as Sports showed initial flair and then determination in the closing minutes that included eight additional minutes to add to the drama.

Sports had an early scare as Jake Eastwood slipped on the surface and spilled a routine ball that saw Alex Reid strike just wide of the post. Sports settled quickly and began to take the game to the Home side. The opening goal came on 13 minutes when a good long pass was controlled by Connor Hall and as he went round the keeper he was brought down for a clear penalty. Hall got up to find the bottom corner from the spot.

Sports should have had a second penalty when Andy Dales played a one-two with Adam Baskerville to break clear on goal. The trailing defender could only push him down as he entered the penalty area but amazingly the only person on the ground not to see this as a clear penalty was the referee who waived play on. Sports were now well on top and Rushall could only resort to numerous cynical fouls. From one Andy dales saw his free kick brilliantly pushed away by Veiga who then repeated this by diving full length to deny John Mcgrath. Andy Dales was then denied again by Veiga who had kept his side in the game.

Things looked ominous for Sports after dominating most of the game but missing several good chances and they were grateful to a fine diving save by Jake Eastwood as he pushed away a free kick from Isaac Cooper. The all important second goal came on 43 minutes when a John Mcgrath corner was headedin from close range by Sports man of the match, Pablo Mills.

Sports expected Rushall to come out fighting in the second half but in truth it was only in the last 10 minutes did they come under pressure. Connor Hall, having another fine game, forced a good save from Veiga and Adam Baskerville just failed to connect with low crosses from Jake Bennett and Andy Dales. Andy Dales again broke clear after another 1-2 with Connor Hall but his 12 yard shot was parried by Veiga and scrambled clear.

With 7 minutes left in normal time, Rushall pulled a goal back as Eastwood was obstructed as he punched clear and when the ball was played back in was off his line as Joe Hull headed in from 6 yards out. Sports went on the attack again and a fine move ended with Hall squaring for Jack Broadhead but his 10 yard shot cleared the bar.

Sports had to suffer eight long minutes of overtime (should have been 4!!!) but with the defence in control and Jake Eastwood showing composure they held on to secure a fine victory and 3 important points.