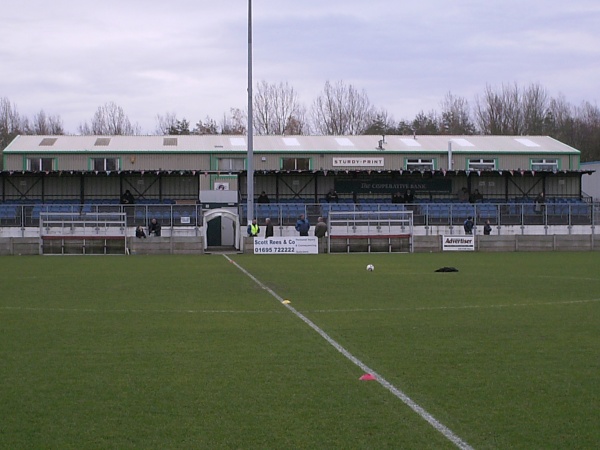 Skelmersdale: Priestley, Fernandes, Holden, Mcintosh, Bodie, Strickland, Lowe (Burns 75), Woolcott, Almond, Wall (Hodkinson 67), , Ince (Rendall 80)
Sports: Eastwood, Bennett, Turner, Mcgrath (Belgrave 75), Mills, Broadhead, Dales (Litchfield 45), Grocott(Burgin 81), Morrison, Baskerville, Schofield.
Sports came back with their first double of the season and three vital points.
Both teams took time to settle but it was Sports who created the first chance, a short free kick to John Mcgrath whose cross found Adam Baskerville 8 yards out but he headed wide. The home side looked dangerous when Andy Dales was robbed in midfield and a quick break saw Chris Almond shoot wide from 20 yards. Sports were put under pressure and Paul Woolcott forced Jake Eastwood into a full length diving save, the corner headed wide by Rob Mcintosh.
Sports grabbed the all important first goal on the stroke of half-time as Andy Dales brought down a long crossfield pass, cut inside Robert Bodie only to be brought down. The penalty was delayed for several minutes allowing for treatment but Dales was forced off on a stretcher. Adam Baskerville kept up his excellent penalty taking with a low shot into the corner.
This was the goal to settle the team down and Sports came out on the front foot early in the second half. A mix up between the Keeper and centre half aloowed in Brodie Litchfield and he slotted in from 8 yards out to double the lead on 53 minutes. a minute later Litchfield outpaced Woolcott who dragged him down in the area for a second penalty. Litchfield picked himself up to send the keeper the wrong way from the penalty.
Jake Eastwood produced another fine diving stop to deny Kenny Strickland before Sports almost scored again. Jake Bennet got behind the home defence and his low cross found Danny Schofield at the back post but his stretching volley was inches wide. Eastwood again did well when a corner was headed towards the top corner but he again saved well at full stretch. Jack Broadhead hit a stinging 15 yard shot that was turned away by Phil Priestley.
Skelmersdale scored a consolation goal in the last minute, the referee awarding a third penalty that Chris Almond converted.
Att. 187