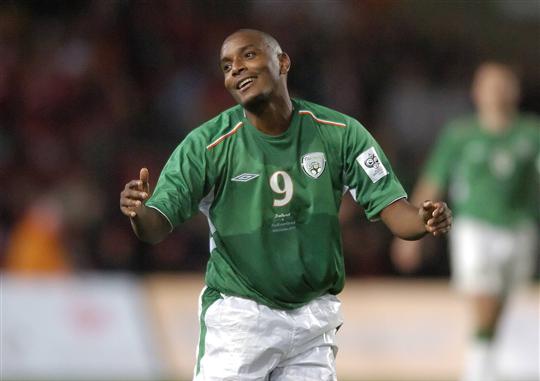 As John McGrath’s new look team continued to take shape Sports gave a debut to Clinton Morrison, a forward who in his time had played international football for the Republic of Ireland, and been the subject of a £2 million transfer.

Of almost as much value to his new club as his goal scoring exploits and career record at the highest level was the fact that he gives the club different options up front  to those of the smaller nippy pairing s that have served them so far this season.

The match was a good advert for the game at this level, and Stourbridge were quick to take the fight to their opponents to the extent that Jake Bennett was forced to head the ball away from under his own crossbar in the 4th minute (a skill that he had demonstrated to great effect away to Whitby the previous week).

Daniel Scarr had the next best effort beating the home defence with a header that he could only watch hit the bar and bounce away.

Jack Tolley in the MIckleover goal showed what he was capable of as he tipped a goal bound strike from distance over the bar with one hand on 37 minutes.

Sports best effort of the half came three minutes later as a cross from Morrison was met by the head of Tom Burgin who could only steer the ball narrowly wide of the target.

The visitors struck on the verge of half time having spent much of the half knocking on the door. Dodd and Luke Benbow combined to provide a chance for Chris Lait whose curling shot from outside the box fizzed past Tolley who could do little about a shot of such quality.

McGrath had a shot at goal a couple of minutes after the restart but was unable to find the target, but Sports pulled level on 52 minutes.

Ben Turner, as he so often does provided a quality cross into the area from the left that provided Morrison with the best possible invitation to head it home. The debut boy  was not going to spurn it, and Mickleover Sports became the third team of his career to benefit from a goal on his first appearance, the previous two being Crystal Palace and the Republic of Ireland.

Andy Dales appeared to be impeded as he ran into the box in the 67th minute but the referee waved away appeals for a penalty, and Bennett set up Danny Schofield a minute later, but the ex Millwall man fired over the bar.

A free kick fired home by Drew Canavan in the 83rd minute put the visitors in front again. There was a certain amount of doubt over whether Jack Broadhead had indeed fouled Kayelden Brown just outside the area but that didn’t excuse the wall of defenders, who had been properly placed by Tolley, for failing to react. If they had jumped to block the kick things may have been different, but Tolley was unable to get across goal from the side he was covering, and the ball nestled in the far corner of the net from him.

Bennett yet again tried to make things happen with raids from his position on the right side of the defence but it was not to be.

Manager John McGrath described himself pleased with his team’s display in the main, but disappointed to not still be in a competition that he thought they deserved something out of.

He also admitted to being delighted with Clinton Morrison who he was convinced had a lot to bring to the team.