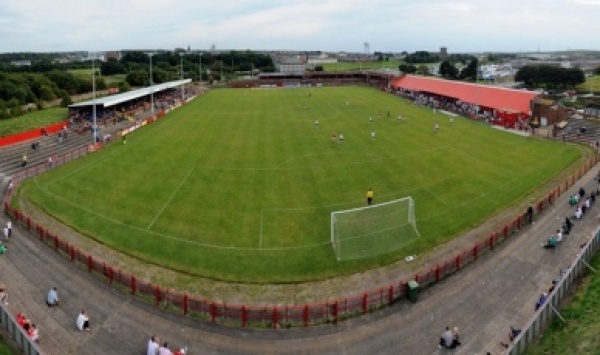 By Tony Shaw
Workington: Taylor, Douglas, Rowntree, Wordsworth, Calvert, Wright (Waterston 80), Syminton, Mcluckie, Allison, Joel (Earl 75), Tinnion.
Sports: King, Grocott, Turner, Mcgrath, Mills, Burgin, Dales, Scott, Morris (Grayson 67), Garnett, Phillips. Other subs Timms, Horne, Morrison
Attendance 397.
Sports were unlucky to go down to this score-line, especially as they had around 70% of possession in a game against one of the form teams of the Division.
After a long journey it was Sports who settled early and they should have taken one of three early chances. Pablo Mills went close on 10 minutes meeting a John Mcgrath corner with a goal-bound header but he was denied by a full length save from Aaran Taylor. An intricate move saw Andy Dales find Evan Garnett but with only Taylor to beat he screwed his shot wide of the far post on 12 minutes. Dales then went close with a fierce shot which was held well by Taylor.
To make matters worse Workington took a 13th minute lead. A corner was headed away but only as far as Conor Tinion and his return cross caught out Sports and Dan Wordsworth reacted first to flick the ball on and over Lewis King. Sports were lacking a final pass though they dominated but were hit y a poor second goal on the stroke of half time. Lewis King came out to collect a routine waist high cross but this was knocked from his grasp and controversially rolled in by Wordsworth for his second goal, despite Sports protests.
Sports tried to hit back at the start of the second half and Garnett headed into the side netting at the near post from Jake Scott’s cross. With Sports pushing forward they were hit on the break on 84 minutes when Nathan Waterston’s ball was swept home by Phil McLuckie.
Sports still had chances to score but Evan Garnett fired a first time shot over the bar and Pablo Mills’ chip went past the far post.
#SportsRising