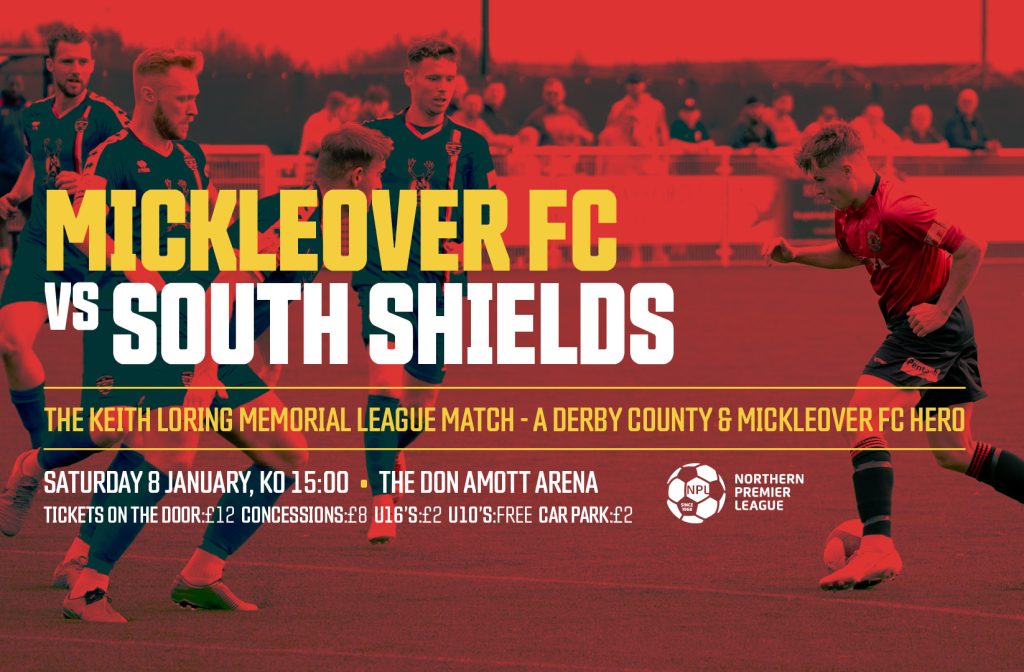 Mickleover FC squad will need all the confidence gained in last weekends win at Hyde, when they face title contenders South Shields at the Don Amott Arena in the Keith Loring Memorial League Match.

Sports will have George Milner and James Butler available again, while Jahvan Davidson-Miller is also possible.

Our visitors are currently third in the NPL table, having only lost one away game all season, but having only played five games in the last two months, their home win against Gainsborough at the end of November was their only win in those five, having also lost to Hyde at home Pre Christmas.

Manager Graham Fenton has managed to keep a fairly stable starting eleven of late too, but having gone down 0-3 on the opening day of the season, Sports will be looking to turn the tables on our North Eastern visitors.

Myles Boney is their first choice goalkeeper, a former Blackpool Academy graduate. He made six first team appearances and was loaned to Nantwich and Solihull Moors, before a third loan spell brought him to South Shields in July 2019, then making the move permanent a year later. He was then loaned to Darlington for a month in early 2021, before becoming first choice for South Shields.

Midfielder Mitch Rose is the brother of former England player Danny. He started out in the Sheffield Wednesday youth team before a move to Rotherham in 2012, where he made five senior appearances. Loans at Stamford and Crawley Town preceded a move to Ilkeston, moving on to Mansfield Town in League Two where he made 52 appearances.

After a short spell at Newport County, he had a couple of seasons each at Grimsby Town and Notts County, before going non-league again with Boston United. He came to South Shields in December, after three months at Yeovil.

Left back Blair Adams is the visitors captain, having started his career as a junior at Sunderland. He didn’t make their first team, but gained league experience during loans at Brentford, Northampton and Coventry, before joining the Sky Blues permanently in 2013.

After 64 games in a Coventry shirt he moved on to Notts County, making another 55 first team appearances, plus being loaned to Mansfield. Further stops at Cambridge Utd, Hamilton Academicals and Hartlepool followed, before arriving at South Shields in July 2018. He had a month loans at Gateshead early last year, but is now first choice on the team sheet and is s former England Under 20’s capped player.

Midfielder Callum Ross started out at Cramlington Juniors before being spotted by Sunderland, where he spent three years before returning to Cramlington again. He then tried his luck in the US, spending three years at Wingate Bulldogs, a University team. He then moved up to the US Pro Soccer League with Charlotte Independence and Oklahoma City Energy, before returning to the UK with South Shields in January 2020.

Former Carlisle Utd Junior centre back Dillon Morse has spent all of his career in the North. After his release from Carlisle, he joined Benfield, before spending a year each at Gateshead and Blyth Spartans. He came to South Shields in July 2016, but was briefly loaned back to Gateshead for a month, early last year.

Welshman Jack Bodenham started out at Cardiff City, but was released in August last year after loans at The New Saints and Hereford. Capped by his country at Under 19 level, he came straight to South Shields and was quickly established in their starting 11 this season.

Ghanaian born Striker Darius Osei started out at Stalybridge Celtic, before being picked up by Oldham Athletic. In 27 games he scored three goals for the League One side, before a short stop at Maidstone preceded his return to Stalybridge. He came to South Shields in February 2020.

Nathan Lowe is a midfielder who started out as a Burnley Junior, he joined FC United after being released in 2016. Moving on to Southport he was then loaned to Spennymoor, before joining South Shields in July 2019. Like a number of his team mates, he was loaned to Darlington for a month in early 2021.

Striker JJ Hooper started off at Cray Wanderers Academy before moving north to Newcastle Utd. He was then loaned out to Darlington and Workington before a permanent move to Northampton, where he made five starts for the League Two side.

Further loans at Alfreton and Farnborough followed, before another move to Havant and Waterlooville, preceding a spell at League One Port Vale, where he scored 10 goals in 54 appearances. After a loan back at Northampton, his path took him to Grimsby, Bromley, Wrexham and Barnet, before joining South Shields in November 2021.

Will McGowan was a summer signing who started out at Sunderland. The young midfielder has more recently been at Doncaster Rovers and has scored in each of South Shields last three home games.

Striker Cedric Main played his early football in the Netherlands. From the KFC Youth side he played for FC Groningen/Cambuur and Ajax Amateurs, before moving to Spain with CF La Nucia and Almagro CF. After joining FC United in January last year, he came to South Shields last October.

Striker Ntumba Massanka is well travelled, having started his career as a Burnley Junior. He had loans spells at York, Morecambe, Wrexham, Dover and RWD Molenbeek in Belgium, before joining Chorley on his release in 2019. He came to South Shields in July last year, after a spell in Italy with Angelana.

Jordan Hunter is a former Liverpool and Sunderland Academy player, who came to South Shields in July 2020, but is currently out injured.

Alex Kempster is a striker who came to South Shields from York City in August 2020, after a loan at Spennymoor. He started out at Whitley Bay.

Midfielder Robert Briggs has spent over six years at South Shields, having joined from Spennymoor in August 2015. With over 300 games under his belt for the club, he started off at Gateshead and has played for Blyth Spartans, Sunderland RCA, Shildon and West Auckland too.

Brandon Taylor is a loanee from Darlington, the young defender joined Sunderland from Birtley and went to Darlington in August 2021.

A summer 2021 signing Midfielder Conor Tee is a former Leicester City Junior, who was signed from Brackley

Sam Hodgson is a young striker from our visitors own Academy, similarly midfielder Will Jenkins and Goalkeeper Aaron Steavens, all more recent additions to the first team squad.

Although Jon Shaw runs the clubs Academy, the veteran striker is often on the bench for first team games too. He was a Sheffield Wednesday Junior, and played at York, Burton, Halifax, Rochdale, Crawley, Barrow, Mansfield, Luton and Gateshead, before arriving at South Shields back in 2016.

Kick off is at the Don Amott Arena at 3pm and a big crowd is expected!!