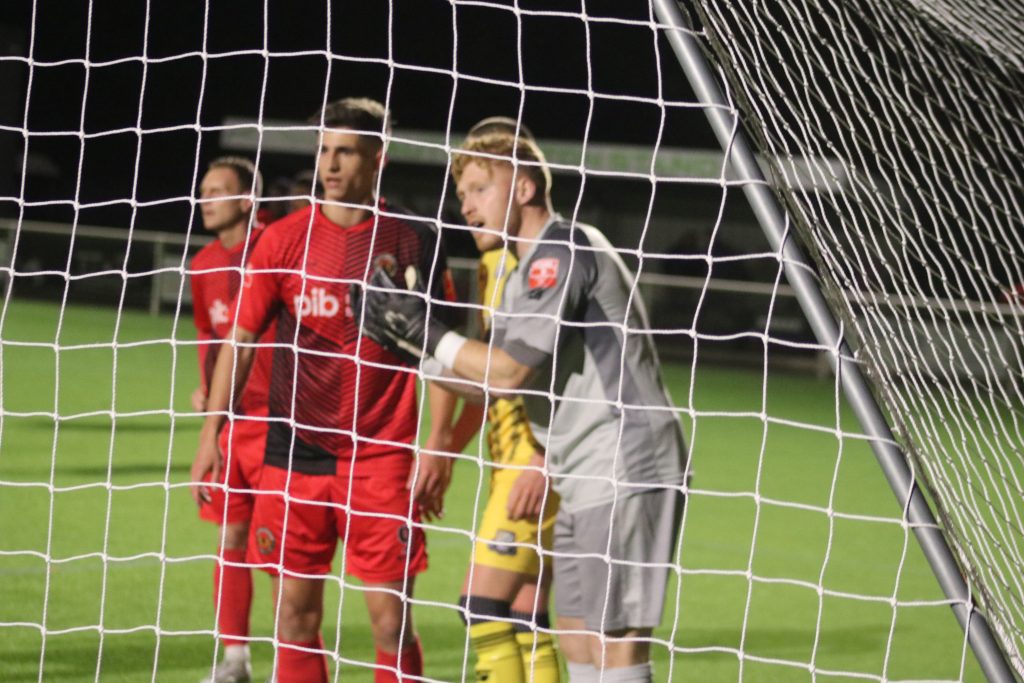 Mickleover haven’t had the best of records against Basford Utd in recent years, but they were able to claim all three points last night in tough uncompromising slog at the Don Amott Arena.

A bitterly cold breeze and drizzle in the air, contributed to a poor attendance, but there was plenty of action on the pitch.

After just three minutes Greg Smith put a header just wide of the post for Basford, but a minute later Mickleover’s first real attack paid dividends. A good strong build up saw a cross into the box, which was initially dropped by keeper Keiran Preston. Beavon had a shot blocked, before it fell to Wilson, who made no hesitation in planting it firmly into the roof of the net of his former team, 1-0.

Dales then went on a run and found Greaves, whose shot was saved, before Dolan attacked down the wing, but his cross was just too long.

Basford were on the attack too, but skipper Matt Thornhill’s eighth minute cross was to long too. They continued with some sustained attacking and when Adam Chapman crossed from Basford’s right, Smith was on the receiving end to fire past Hedge for the equaliser after 12 minutes, 1-1.

But it continued almost end to end and Reeves fed Dales, his shot was blocked, then the resulting corner created a goalmouth scramble before the danger was cleared.

14 minutes in and Reeves put a header just wide of the right- hand post from a Wilson free kick, before Smith retaliated with a volley tipped over the bar by Hedge, followed by another shot cleared by Wilson.

With Yeomans and Greaves combining well on the right, Mickleover earned two consecutive corners, before Beavon sent Reeves on a run, but the young striker was fractionally beaten to the ball by the advancing Preston.

The game continued very even with chances at both ends, and after another strong spell from Mickleover and both and Mann solid at the back, Dales charged into the box, but the defence had it covered before he was able to shoot, and then Hedge had to make another diving save, before saving the final header from the following corner.

The referee had give some strange decisions, particularly blatant errors over corners or goal kicks, but on the half-hour  Greaves had another charge down the right and almost broke through.

It preceded another strong period for the Mickleover strike force, with Reeves, Beavon and Dales combining after a Dolan run. Dales then had another attempt over the bar after 34 minutes and seven minutes later Smith put a shot just wide for the visitors.

The second half started just as lively, with Wilson finding Beavon, who set up Dales, but his shot was over again. But 51 minutes and Dales was interpassing with Greaves, but the latter’s shot didn’t trouble the keeper.

Basford then went on the attack, with Thornhill firing over the bar, before he came through again to force another diving save from Hedge, tipping over the bar.

Smith bundled the ball into the net from the following corner, but with Hedge battered by three Basford players, the goal was disallowed and a free kick given.

On the hour though it changed again, in what was to become the decisive moment in the game. It followed an attack down the right, the ball came into the box and there was another scramble, before Reeves connected and beat Preston from close range, 2-1.

Reeves had another shot blocked four minutes later, after a joint Beavon and Dales attack, but Basford were still threatening, particularly on the break, with Hedge holding on firmly to a shot from the right of the box.

It was close again for Mickleover too when Beavon’s initial 76th minute effort was blocked, Wilson’s rebound was saved too, before Dales final shot was saved.

Just after Chapman had fired a shot over the bar for Basford, Mickleover made their first change, with Bateman on for Rose, who had struggled to make and impression on the night.

With three minutes on the clock Watt replaced Greaves to, as Basford pushed for a late equaliser.

Watt was penalised when the ref was tricked by Smith. The initial slap of contact from Smith could be heard by the crowd, but as the striker then fell to the ground the ref awarded a free kick. It was of little consequence though, as the kick was nearer the Langley Country Park Housing Estate than the back of Hedge’s net.

Warren made a few seconds cameo appearance to replace Dales, but the after four minutes add on, the whistle finally blew and three points were secured.