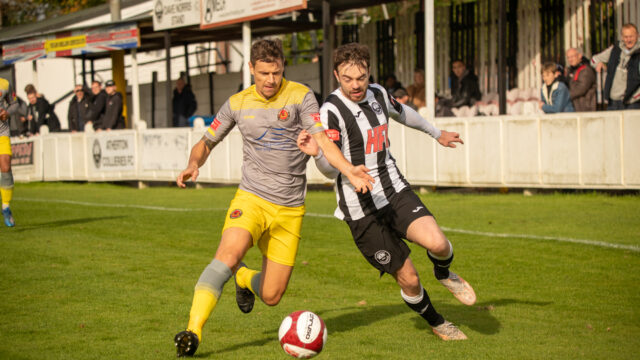 Goals from Andy Dales and the returning Stuart Beavon gave a Mickleover their first away win of the season and their first win since the end of August, returning home 2-1 victors at Atherton Collieries.

Chances proved hard to come by in the first half for both teams, Marcus Cusani going close for the hosts and Luke Hutchinson making a good save from a Mickleover attack. Both defences were well and truly on top as their attacking colleagues struggled to break through.

The game could only improve in the second half and it did significantly. It was Mickleover who seized the advantage on the hour mark, Andy Dales evading unscathed from some tepid defending and firing a speculative low drive which got the better of Atherton keeper Hutchinson 1-0..

In their search for a response, Atherton created a couple of good openings. Danny Lambert and Matty Gillam both found themselves denied in the penalty box. However, the hosts luck turned with ten minutes left on the clock, when full back Gareth Peet was tripped in the box. The referee pointing straight to the spot and Gillam tucked the penalty home with confidence to level the scores. 1-1.

Hawkins saved well as Peet tried a close range shot, but it was still deadlock with time running out, but it was Stuart Beavon that struck late on for Mickleover, taking a chance well at the near post to send the Sports  on their return home jubilant with a 2-1 victory.