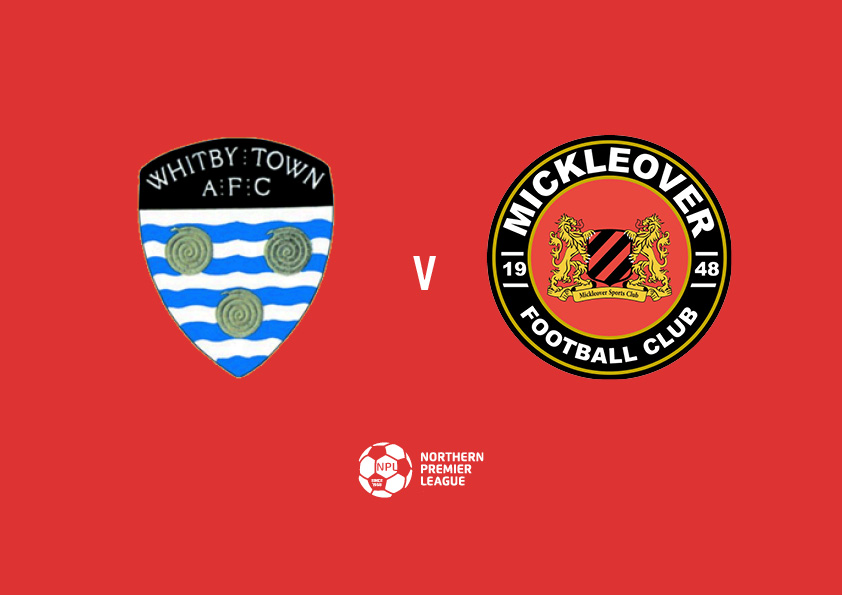 This weekend Mickleover are off to the seaside to try and seek their second away win of the season at Whitby Town.

The hosts were without a game last Saturday, as their trip to FC United was postponed.

Currently sixth in the NPL with three games in hand over Mickleover, they have won 10 of their 19 matches in the NPL, but have also suffered three home defeats.

In their last game they went down 0-1 to Nantwich in the FA Trophy, while in the NPL they had a 1-1 draw at Basford.

Some of the Whitby squad are in their second spell with the club, including goalkeeper Shane Bland. The former Middlesbrough and Spennymoor player rejoined from West Auckland in July 2019.

Defender Jassem Sukar has been at the club since April 2018. He started as a Sunderland junior and then went to Scotland with Dundee United. He was loaned out to Peterhead, Brechin City and Arbroath, before joining York City on his release in 2017, prior to arriving at Whitby.

Captain Dan Rowe is a midfielder or defender, who came from the Rotherham Academy. After a loan at Stalybridge he then joined Wycombe Wanderers and played 47 games for the league Two side, but went out on loan again to Barrow. He was at York City and Frickley before signing for Whitby in July 2019.

Right back Nathan Dyer is a more recent arrival having come from Grantham this summer, having previously come through York City’s youth scheme.

Lewis Hawkins is a midfielder who has spent all of his career in the North East. He started out at Hartlepool and was loaned to Whitby, Spennymoor, York City, before a permanent move to Blyth Spartans in August 2019. He’s been at Whitby since August last year.

Centre back Jameed Ible was a Stockport County junior, before joining Salford City. He has had spells at York, Guiseley, Frickley, Scarborough and Pontefract, before arriving at Whitby in July last year. He is also a full International with St Kitts & Nevis.

Josh Macdonald is currently on loan from Hartlepool. The young midfielder started out at Marske Utd, before moving to Halifax Town. He is on a season long loan.

Winger Jacob Hazel is a product of Chesterfield’s youth scheme. He had loans at Matlock, Workington, Sprint Jelay in Norway and Buxton, before signing for FC United and Ashton in 2014. He spent 10 months at Mickleover in 2015 and has since played for Frickley, Gainsborough, Farsley and Scarborough, joining Whitby in summer 2020 from Frickley.

Striker Bradley Fewster spent his early career at Middlesbrough and had loans at Preston, York and Hartlepool before his release in 2017. He then played for Spennymoor and Blyth, before joining Whitby in February2019.

Harry Green is another loanee, who plays left wing or midfield. He has been on Middleborough’s books since joining the under 10’s Academy.

Midfielder Coleby Shepherd is a midfielder and was signed in July last year, after being released from Hartlepool.

Marcus Giles is a young striker that came from Whitley Bay in June last year. He has also played for Ashington and Morpeth.

Centre back Jonathan Burn was a Middlesbrough Academy player, who had loans at Oldham and Kilmarnock before joining Bristol Rovers in 2017. A further loan at York preceded a move to Darlington, but came to Whitby from Whickham in July 2020.

Nick Cranston is the second choice goalkeeper who has only recently arrived from Darlington.

Both Soni Fergus and Priestley Griffiths were pre-season signings. Right back Fergus came from Pickering Town and had previously been at the Newcastle Utd Academy, Garforth, Guisborough and Harrogate Town.

Griffiths is a midfielder who started at Middlesbrough, moving on via Spennymoor, Bishop Auckland, Marske and Blyth Spartans, plus a brief spell in Iceland.

Midfielder Adam Gell was originally signed from Guisborough in 2015. But having left to join Shildon, he returned in August 2018.