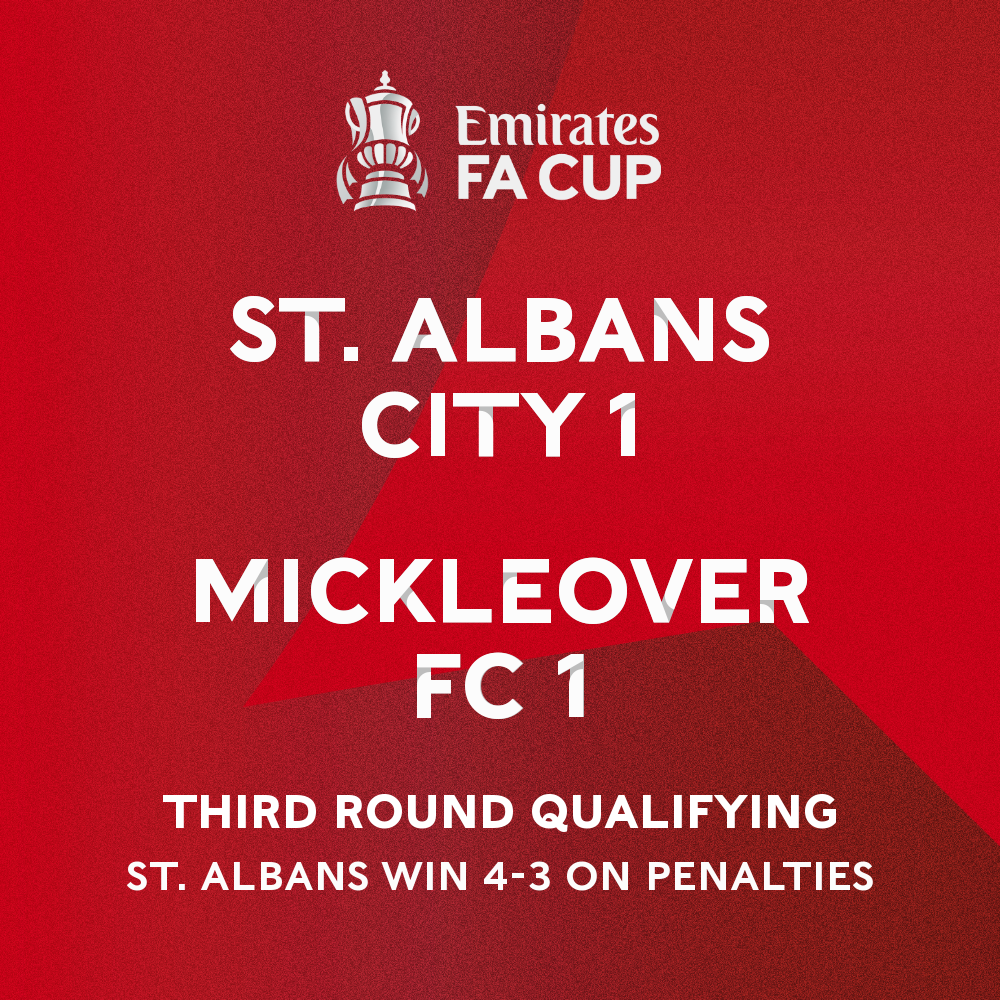 Pride in defeat was definitely the summing up of Mickleover’s magnificent performance in the FA Cup 3rd round qualifier at St Albans City.

Despite the dampness of the evening, Mickleover showed no fears of their National League South hosts, and were straight on the attack.

Wright’s through ball after two minutes was aiming for Beavon, but as it bogged down it failed to reach its destination.

Only a minute later Milner picked up on some casual defending and earned Sports first corner.

But St Albans showed how dangerous they could be on the break, when after five minutes Bennett was forced to race back to make a critical interception.

Milner was soon in the action again, he halted a Saints attack, only for Shaun Jeffers to fire the free kick well over the bar.

St Albans began to get more into the game and Slinn was called into action when Devante Stanley put a curling free kick in, tipped out for a corner by the Mickleover keeper.

It became end to end for a while, with Wright firing across the face of the goal with no one to receive, while good build from Saints left Josh Bennett’s attempt going out for a corner.

Mickleover were on the break 17 minutes in, but after Agustien’s accuracy had pinpointed Beavon, the strikers run was halted by the linesman’s flag.

The pressure began to build on the Sports defence and after Jeffers had a close range shot tipped over, he followed up with another blocked shot into the crowded box, from the resultant corner.

The deadlock was broken on 24 minutes though when after another corner from the right for St Albans met defender James Kaloczi’s head and it was 1-0 to the hosts.

After a magnificent charge from his own area, Wright put Milner through on goal, but his final touch was easily collected by Michael Johnson in the Saints goal.

Mickleover’s best chance of an equaliser came after 34 minutes when Bacon was played through on goal, but his effort finished in the side netting.

St Albans were straight back into the attack and only a minute later Kyran Wiltshire put in a low shot, which was deflected out for another corner.

Stanley then had another positive run into the Sports box, but his shot was blocked by Butler, before Zane Banton put a cross inside and the follow up was fired high and wide.

Saints fire power kept the Sports defence under attack until the half time whistle, with another run from Banton being blocked, before Tom Bender shot well wide of the target. Slinn was having to pull out all the stops to keep it at 0-1.

It was another positive start to the second half for Mickleover too, after an early corner for Saints. Beavon had cut inside after collecting the ball to his left, but his cross bounced around on various heads before going wide.

After 51 minutes it finally came, another crowded box saw the ball bouncing around, before it just fell right for Bacon, who hit home at close range for 1-1.

Shortly after the equaliser Webb came on for Wright, but as the hour approached the speedy Banton led another break for the home side, but his shot was well held by Slinn low to his right.

Just after Bacon was booked for a late challenge, Beavon sent him on another run to the edge of the box, but his shot was deflected away by a St Albans defender.

The home side were obviously aware of the time running out and began to up their pace again. Munashe Sundrie’s shot was well held by Slinn, before the Mickleover keeper was in action again, palming away Stanley’s long range effort, before diving onto the loose ball.

St Albans sub Michael Weiss then started to cause trouble for the Sports defence, his 74th minute cross from the left was cleared for a corner, before he went one on one with Slinn a couple of minutes later, firing over the bar.

Into the final 15 minutes Sports subbed Bacon for Walshaw and the striker was soon in the action, after Warren created space in the middle and sent him on a run, only to be flagged marginally offside.

Sports were still looking for the break that could be decisive, as Sports backline of Bennett, Morris, Butler and Watt, fended off the barrage.

A Kaloczi header was cleared off the line with four minutes on the clock, before three minutes of stoppage time was announced.

Sports held on for magnificent 1-1 draw, which in normal circumstances would have meant a replay back at the Don Amott Arena.

But it was down to a penalty shootout with the home side going first. St Albans scored their first four, before Slinn saved Wiltshire’s effort. Agustien had put Mickleover’s first effort over the bar, before Warren, Milner and Webb all found the back of the net.

Beavon needed to score to take it into sudden death, but unfortunately Johnson guessed right and the shot was saved, with St Albans taking the win 4-3.

The Sports team did Mickleover proud in a well drilled and positive performance that bodes well for the rest of the Northern Premier League season.