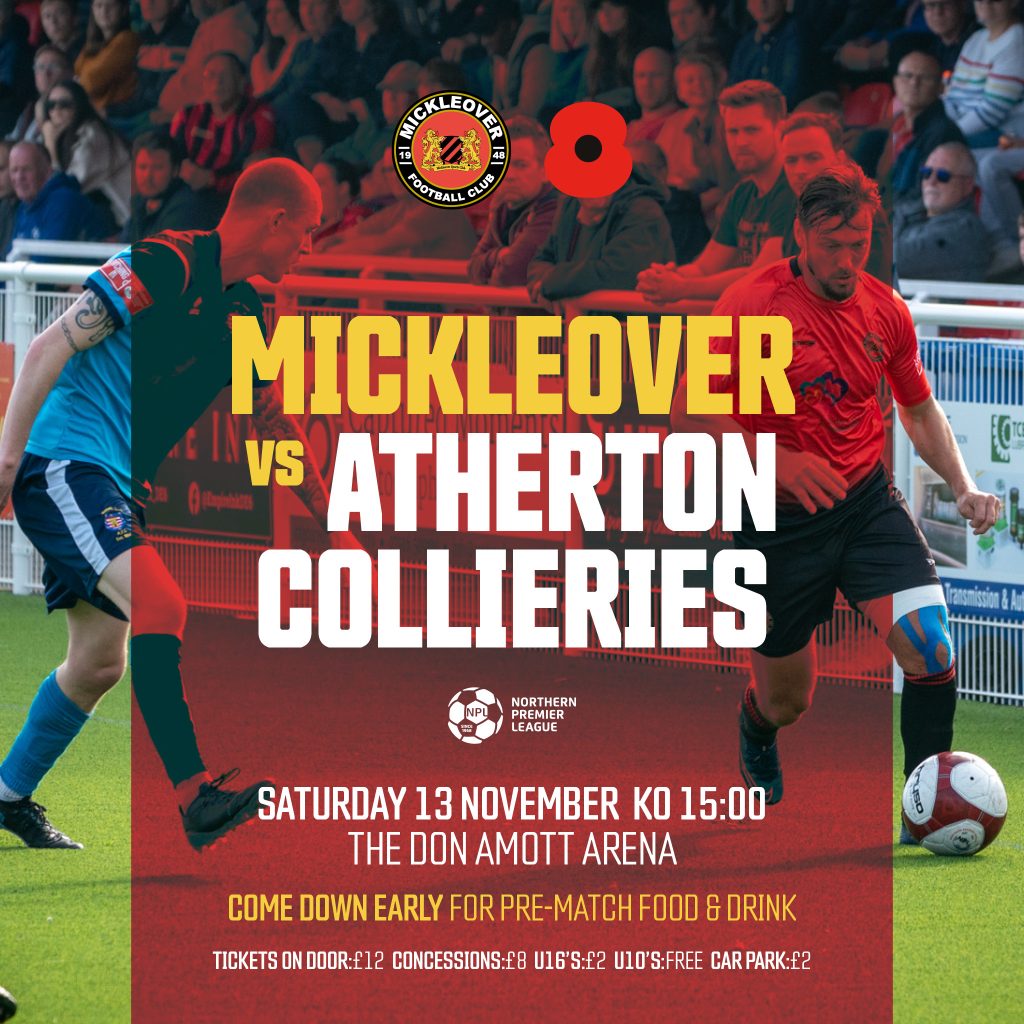 This weekend Mickleover face Atherton Collieries at the Don Amott Arena, in a game brought forward from January 29th.

Atherton were the victims of Mickleover’s only away so far this season, so while we look to try and take three points to ease relegation fears, our visitors will be seeking revenge.

They were in 11th in the NPL before our visit, but have only taken one point since, in a home draw against South Shields. They went down 2-0 at Buxton on Tuesday night, and are now 16th.

Wynne started out with Oldham Athletic and Rochdale, before joining AFC Fylde. He has also played for Fleetwood and Lancaster City, Glossop North and Abbey Hey, before joining Altrincham, prior to his move to Atherton.

Clive Smith is a right back who started out at Preston North End. He had loans at Bamber Bridge and St.Johnstone, but never made the Preston first team and was released in December 2017. After six months at Southport he joined Droylsden and has been at Atherton since December 2018. But after being carried off in Tuesday nights game at Buxton, he’s a doubtful starter this weekend.

Wing back Gareth Peet is an Atherton legend, having joined the club back in 2010. He has also played at Ashton, Skelmersdale and Nelson.

US born Luca De Freitas-Hansen was a pre-season signing from Ashton. The young centre back played for Weston Academy and Portland Pilots in the States, before joining Ashton Athletic in August 2018.His brother plays for Swansea City.

Centre back and skipper Danny Lafferty is another long serving player, having joined Atherton 13 years ago. He has also played for Oldham Borough and Radcliffe Borough.

Joel Amado came from Trafford FC at the end of last season. The young defender has also played at Curzon Ashton and Irlam and represented England Universities.

Attacking midfielder Ben Conway has returned to Atherton in July 2018 after playing in the US with IW Cardinals, OKC Energy and Corpus Christi.

Danny Lambert is another long serving player. The winger started out at Wigan, before moving on to Darlington and is now in his fifth year at Atherton. He has also played at Ashton, Radcliffe and Trafford.

Another player in his second spell with our hosts is striker Marcus Cusani. He came back to Atherton last season after a spell at Warrington and has also played for Ashton.

Central midfielder Jack Lenehan is a former Rochdale junior. He was loaned to Prescott Cables before joining Chorley and came to Atherton last year after a season with FC United.

Scott Sephton started out with Leigh Genesis. Prior to joining Atherton in May, the midfielder was captain of Stalybridge Celtic. He has also played for Matlock, Warrington, Buxton, Ashton, Trafford, Porthmadog and Prescott Cables.

Striker Elliot Rokka has come from the Tranmere Academy. He arrived at Atherton in March last year from Radcliffe.

Young defender Niall Battersby was spotted playing in the local Manchester League and signed for Atherton. While Luke Hutchinson is second choice keeper and is on loan until January from Bolton Wanderers.

Lewis Doyle is another young midfielder, who was signed from Accrington in July last year. He was previously at Southport, having started out in the Preston North End Academy.

Ethan Kershaw was a Burnley junior before joining Longridge. He moved to Mossley in July last year and came to Atherton pre-season.

Matty Gillam was another new pre-season signing. The young striker was with Rochdale until August last year and had loan spells at Stalybridge and Cork City, before joining Guiseley on his release.

Aaron Smith was signed a week before our visit to Atherton and made his debut this week with a goal in the 2-1 win at Bamber Bridge. He started as a Nottingham Forest junior, before spending a year in Scotland with Hamilton Academicals.  From there he moved to Ashton Utd, before joining Northwich 1874. He went back to Ashton and then moved to Curzon Ashton, before his return to Northwich preceded his arrival at Atherton.

Former Blackpool midfielder Rowan Roache is a recent new signing from Workington. During his time at Blackpool he had loans at Southport, FC United, Derby County and Lancaster, before his loan at Bamber Bridge became permanent. He then moved on to Altrincham in November last year, before joining Workington at the beginning of this season.

Kick off as usual is 3pm and Sports can do with all the support they can muster.