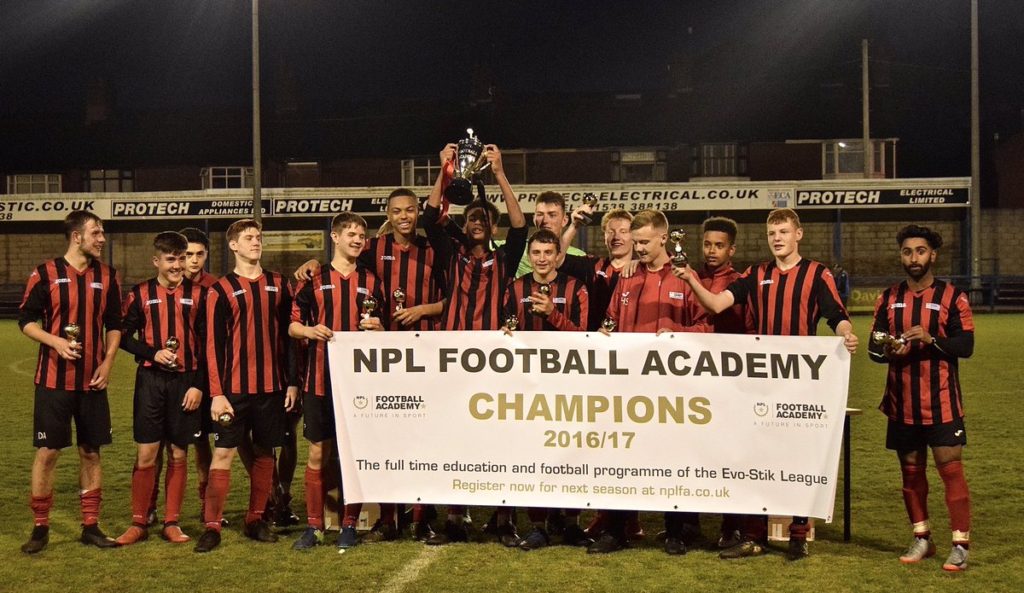 The Northern Premier League Academy League season is drawing to a close with Sports once again having great success. Sports have provided the champions for the last two seasons and last night the first-year team  continued the dominance with a 1-0 win over Matlock Town’s 2nd Years.
Sports First Years (Blacks), who were winners of the Chryso Division and qualified for the Final , played at Leek Town, against the winners of the Joma Division, Matlock Town Second Year team. Sports were crowned as overall Champions after a close fought 1-0 win, courtesy of a Morgan Williams goal in the closing minutes.
This capped a great couple of weeks for the team for having won their League they also came out winners of the 7-a-side competition without conceding a goal.
They now have one more competition to concentrate on, the League Cup. Having reached the semi final after wins over Belper Town an Hednesford Town they have a semi final against last nights opponents to see who can reach a final that is to be played at Stoke City’s Britannia Stadium on May 28th.
Sports Red team (second years), despite winning 3-0 at Matlock last week finished second in their League with two earlier defeats with a depleted team, costing them a possible League win. They were knocked out of the League Cup after two close games against Matlock Town
Not only have the team had success but individually there have been honours for both teams.
Lewis Belgrave was voted NPLFA player of the year, with Jake Dickinson in 3rd place and Lewis, Jake plus Morgan Williams and Manzoor Amiri were chosen in the NPLFA team of the season.
Also take into account that several lads have made their debuts in the First team during this season shows that Academy Coaches, John McGrath and Andy Dales have done an excellent job
John McGrath said:

“As first team manager and head of our outstanding academy I was delighted with how we played. We tried to mirror how the first team play by making sure football was played in the right manner. What makes it extra special is the fact our boys are only first year scholars and some giving up two years to their older counterparts.  I see big futures for some of these kids and it won’t be long before we see a few more debutants coming through to play in our first team. Special mention goes to Jake Smith who I thought had an outstanding game in midfield. He was the best player on the park all night.”