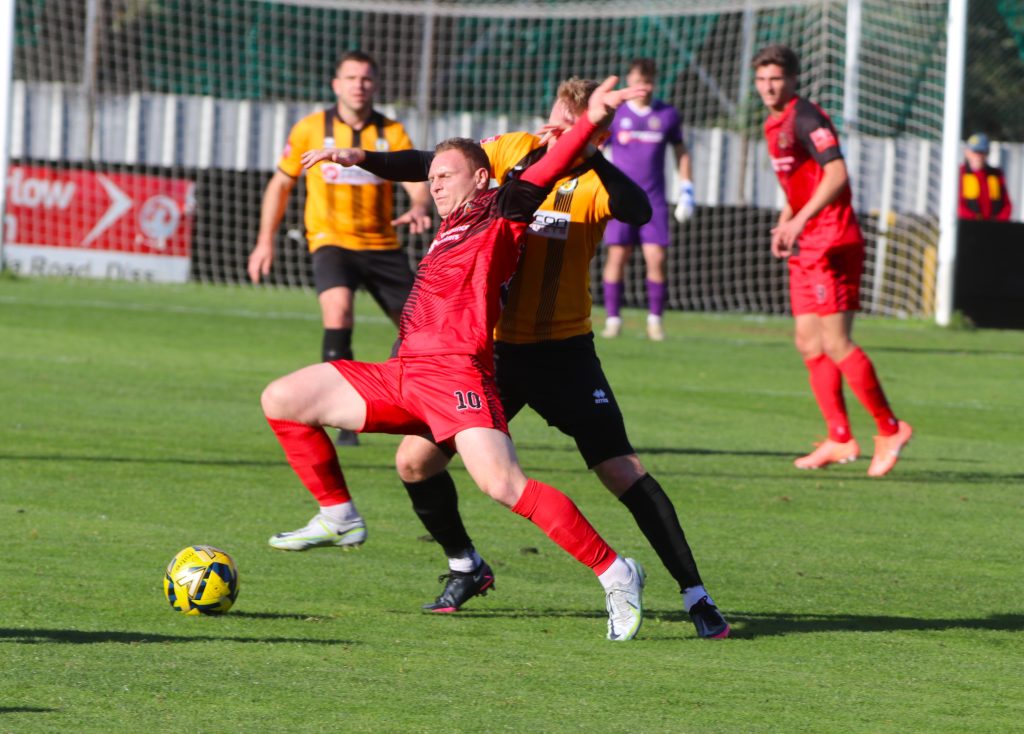 After the disappointment of the early exit from the FA Cup, hopes were high of success as Mickleover visited Isthmian League North side Stowmarket Town, for the FA Trophy tie.

The hosts had the ball in the net after only two minutes following a free kick, but it was given offside.

Beavon then had the first Mickleover shot on goal a minute later, with his effort just wide of the left-hand post. But Reeves went close six minutes in, when his strike forced keeper James Bradbrook into a diving save, after a good build up between Mann and Beavon.

Stowmarket had a couple of corners that came to nought and a 13th minute cross from Chris Casement, was straight into Hedge’s waiting hands.

The play had been fairly even, but Reeves had another header just over the bar after 17 minutes, following a Warren free kick after Beavon was fouled.

Five minutes later Beavon found Reeves on the left, but his shot was deflected out for a corner. Then a telling cross from the Stowmarket left after 26 minutes, almost found Jack Ainsley, but it was just a couple of inches too high.

Neither side looked particularly decisive in midfield, and neither Mann nor Dolan were having the usual cutting runs on the wings.

Beavon found Reeves again after 39 minutes, but his powerful shot was straight at the keeper and then Ainsley wasted a chance for the hosts, wanting too much time before shooting, as the danger was cleared.

With the whistle poised for half time, Mann, Beavon and Reeves combined, but the final ball rolled out of play, just beyond the left-hand post and it remained 0-0.

From the start of the second half Mickleover had more drive and it was only three minutes in when the ball fell nicely for Beavon in space, who set up Reeves for a run, outpacing the defender and slotting it past Bradbrook 1-0.

It could so easily have been level again only two minutes later, when Hedge parried an initial shot, which fell at Evan Collard’s feet, but the Stowmarket midfielder sent his shot high over the bar.

There hadn’t been a lot of creativity from the Mickleover midfield, despite Milner and Warren’s pace and enhthusiam. But after 53 minutes Fankwe had a weak shot wide of the left hand post, with Warren then spotting the keeper off his line, trying a chip just wide gain.

Tev Allen broke through the Mickleover defence and earned a corner after his shot was blocked, but the follow up was just wide.

As the hour mark approached Mickleover just about had the edge, but it was decided to make the first change with Davidson-Miller on for Fankwe.

It was close again for the hosts after 63 minutes, when Butler lost possession on the edge of the box and gave away a free kick, which fortunately caused no problem.

But Davidson-Miller was unlucky not to hit a second for Sports, when he held the ball well and cut in from the right, seeing his shot hit the right-hand post.

Beavon had a 72nd minute break, before Warren’s shot was blocked, but at this point it was just about going Mickleover’s way still.

Allen had another shot across goal after 78 minutes, which Hedge had covered and with four minutes on the clock Horleston came on for his first team debut, replacing Milner.

Reeves teed up Beavon who shot over on the 90minute mark, but then disaster struck. With some of the home fans accepting defeat, Mickleover lost possession and with the ball in the box the defence froze.

Allen was first to react and fired in the equaliser past Hedge from close range, 1-1.

The full-time whistle soon followed and with no extra time, it was straight into penalties. Stowmarket’s first was in, before Warren saw his attempt saved. After the hosts had made it two, Reeves shot was saved too!

Hedge managed to keep Stowmarket’s third shot out, before Wilson stepped up. His attempt was nearer the parallel A14 than the goal and it was all over for Mickleover, apart from the long journey home.