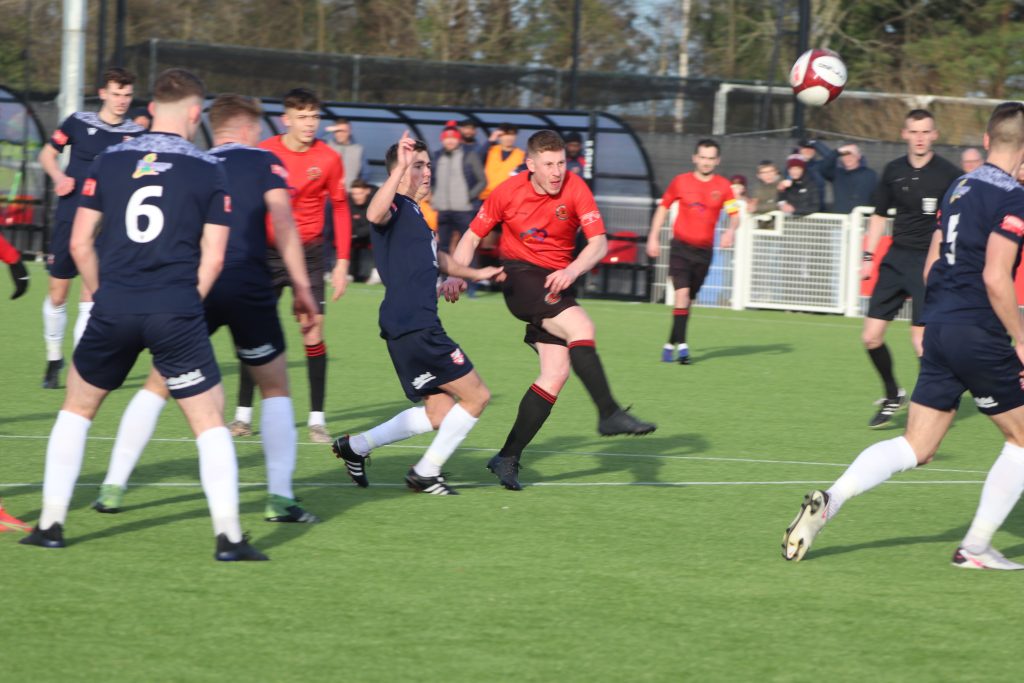 Mickleover started their NPL match against Scarborough Athletic seeking a straight sixth successive victory, but an injury time penalty and red card brought the run to an end.

After an even opening five minutes, Sports won the first corner, but wind assisted it was too long and went straight out of play.

It continued to be end to end with the odd half chance until Hedge was called into action after ten minutes. Scarborough earned a free kick and the Mickleover keeper comfortably collected Gooda’s header. 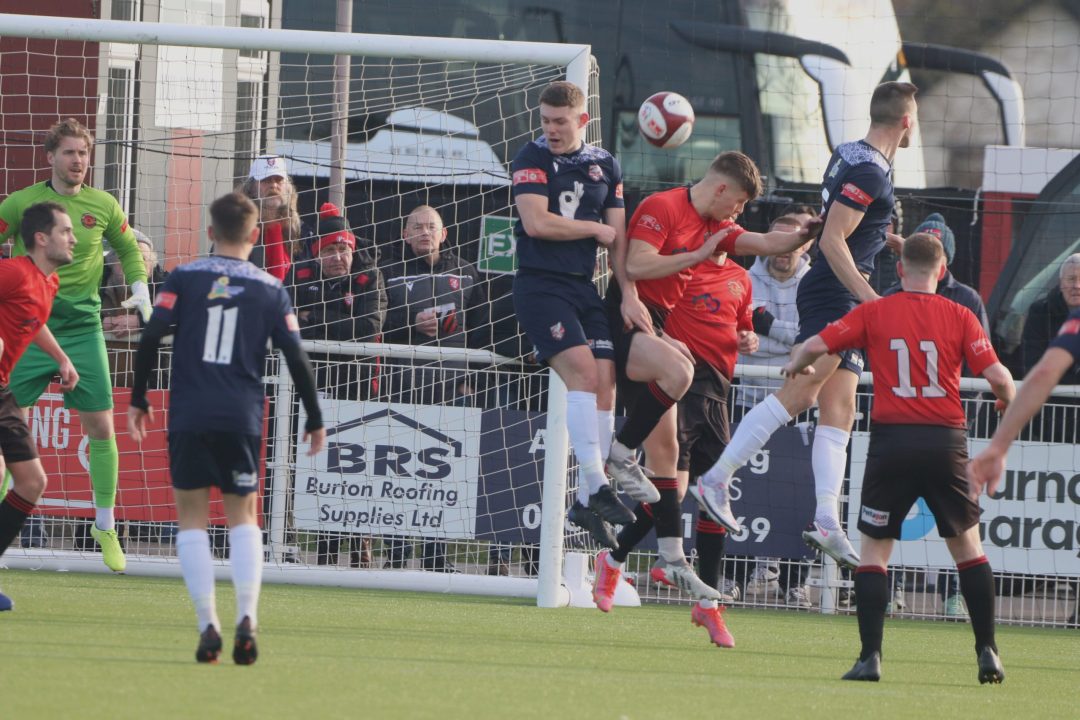 Radcliffe almost got a shot in two minutes later, but his effort from a Milner throw was blocked.

As Agustien, Ravenhill and Warren began to push forward, Mickleover went desperately close to opening the scoring after 13 minutes. Wright had the ball on the left and as the angle narrowed, his shot was just just wide of the right hand post, with Davidson-Miller only inches from helping it on its way.

Davidson-Miller was almost one on one with Scarborough keeper Whiteley after 16 minutes after a long clearance from the Mickleover defence, but the following wind just edged the ball into the keepers favour.

Butler and Radcliffe had been fairly steady in the middle of Sports defence, but it was a loose ball from Butler that set up the visitors next chance. Wilson got his shot in from the left but once again Hedge had it covered.

But Mickleover were soon pushing forward again and Radcliffe put a good ball into the box on the half hour but it was too long for Davidson-Miller.

Ravenhill was then tripped on the edge of the box, but Agustien’s free kick was over the bar.

38 minutes in and Beavon tapped the ball into Warren’s path, but the ball wouldn’t sit for the midfielder and his mishit shot rolled to the keeper.

With half time approaching both teams were seeking to break the deadlock and with Davidson -Miller running onto a long ball, his shot was blocked and similarly Wright’s rebound too.

But Scarborough had a chance too when Day was almost through on goal, only for Mickleover to attack again losing out in scramble in the visitors goal mouth.

0-0 was probably a fair half time score, with few real goal scoring opportunities and not the most attractive game of football seen at the Don Amott Arena this season.

There were no changes at half time but Mickleover began to push forward again from the restart. Both Milner and Dolan had started to press on the wings and Wright managed to fire in a 51st minute shot following a free kick, but Whiteley was untroubled.

Five minutes later Beavon tried a shot from outside the box, but it was easily saved.

Former Sports player James Cadman had come on for Scarborough, and tried a shot from outside the box which was well off target. 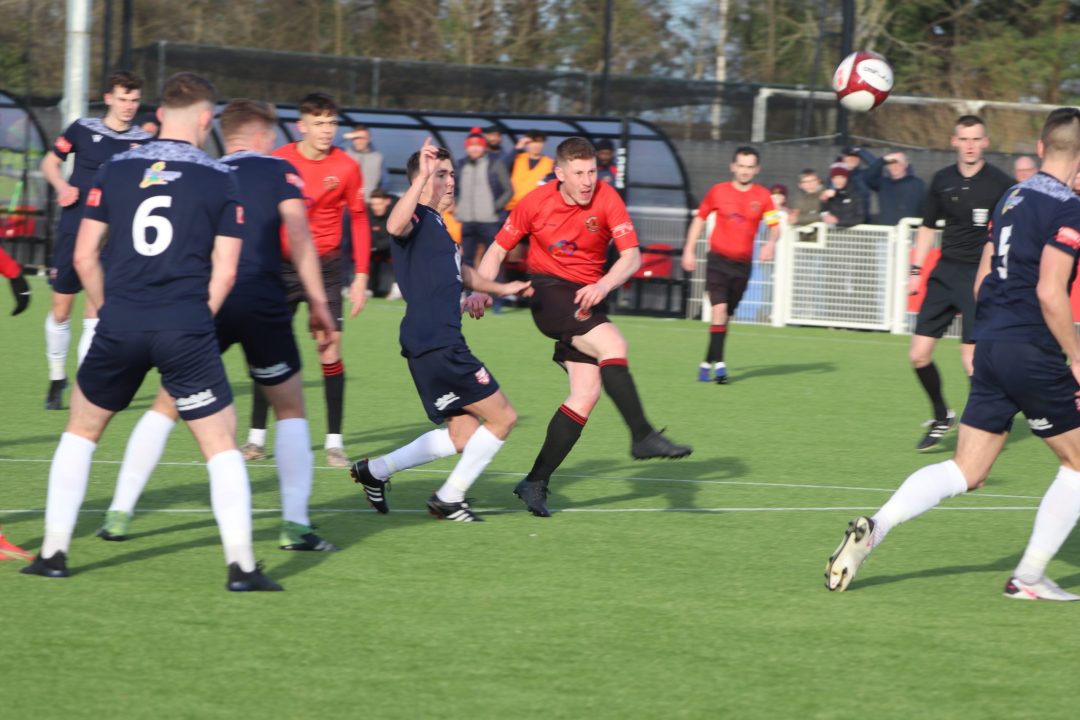 Sports then swapped Davidson-Miller for McDonald after 64 minutes, before the tide turned.

A long throw on the left found centre back Will Thornton and Hedge was beaten on his far post, 0-1.

McDonald soon made his presence felt, holding the ball well to find Warren. He was almost through but his final shot was blocked.

Milner then burst forward after 72 minutes and got a good cross into the box, but there was no one on the receiving end.

A couple of minutes later Dolan jinked his way into a promising position. He got his cross in but once again there was no one to collect.

Cadman had another wild and wide shot for the visitors, just before Sports made a second substitution with Dales on for Agustien.

Beavon had been sharp for the whole game and it was his shot after 80 minutes that earned a penalty for a hand ball, from which Warren placed it firmly in the back of the net for 1-1. 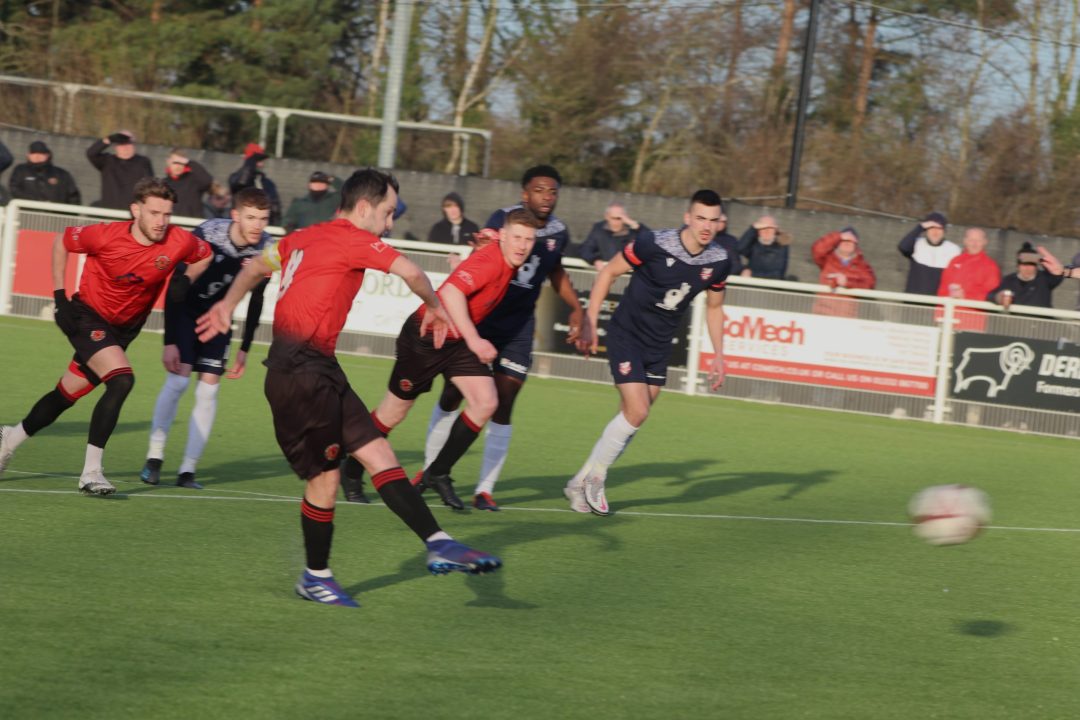 Scarborough continued on the breaks and Cadman almost made it through with six minutes of normal time left. But Sports immediately retaliated and Beavon went close, after a last minute block.

Dolan was then fouled on the left but Wright’s effort after the free kick went over, before a McDonald cross saw Warren’s shot blocked.

Mickleover had the upperhand and as the game went into injury time Whiteley was forced to tip a Dales shot around the post.

From the possibility of snatching a late victory, there was a final blow however. Dolan had lost out on a Scarborough break and as he fought back he was deemed to have fouled and a penalty was awarded in the 105th minute, with the defender red carded too.

Colville made no mistake from the spot and the final whistle soon followed, with the 1-2 scoreline not really confirming the story of the game.