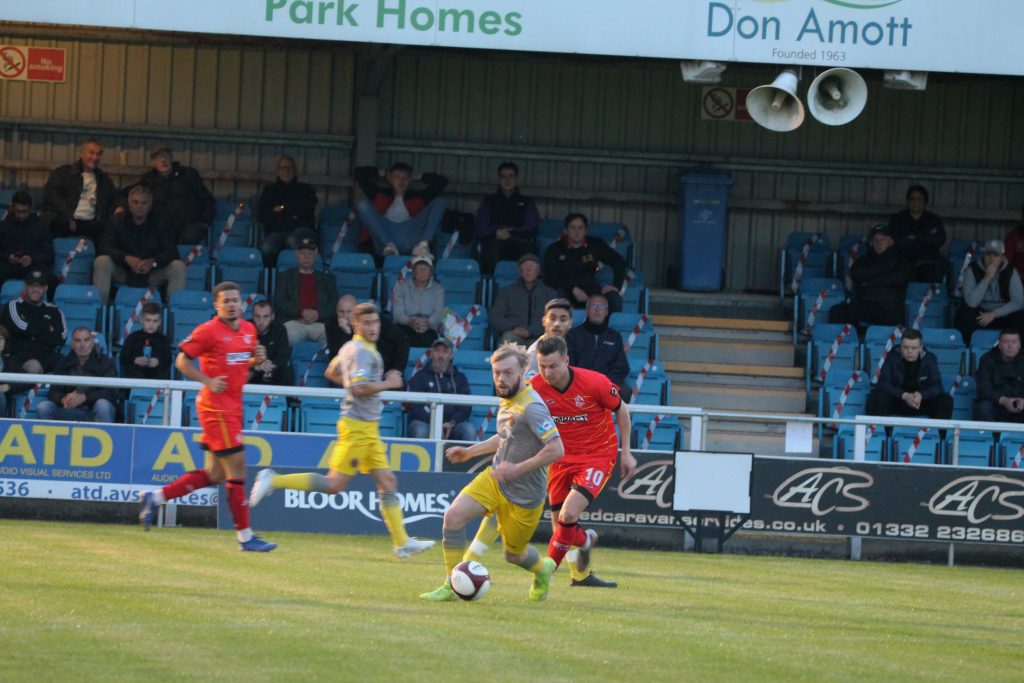 For a change it was dry, sunny and a pleasant evening as Mickleover Sports welcomed Alfreton Town to the Don Amott Arena, for their first pre-season home match for 20/21.

Alfreton were straight on the attack and had a shot blocked within two minutes.

But Sports settled quite quickly and responded with a good build up with a shot from Milner just wide of the post.

When Webb found Bennett in space, a telling return pass allowed Webb to put Milner through, but his blocked attempt went out for a throw-in.

Webb had taken a knock and after about 15 minutes he went off and was replaced by Josh Satchwell.

Webb wasn’t the only one in the wars as Morris had to leave the field to have his head bandaged and on his return, seemed to be on the receiving end of some hard challenges.

It had been fairly even, but most of the play was just into the Mickleover half. But after 34 minutes Bennett had a shot from the right, which bounced off the Alfreton bar.

Only a minute later it was Alfreton’s turn to go close, when space to the left provided an opening for a shot just wide of the post.

There were probably more chances for Alfreton during the first half, but with the final ball letting them down, they went in 0-0 for half time.

Manager McGrath made one change for the second half initially with Elliot Murray on for Watt, whereas Alfreton manager Billy Heath opted for a whole side change, as he had done last weekend at Basford.

Sports started the second half strongly, with Milner shooting high over the bar, before his pass to Gowing, allowed Warren to shoot just wide.

The attacks continued when Verma put a good ball through to Milner, but he couldn’t find enough space to get a shot in.

Satchwell was the next to try his luck but after 51 mins Alfreton broke down the left after Verma lost possession, and the ball was into the area met with a powerful header from an Alfreton striker to give them a 1-0 lead.

Only a minute later Stuart Beavon was left in the clear and his shot was initially saved but the Alfreton keeper couldn’t hold it and it was 1-1.

Alfreton began to settle down again after Sports had dominated the first 10 minutes, but just after they had a shot straight at Slinn, Beavon almost found his way around the back of the defence.

Morris eventually came off just before the hour, with Beavon soon following, just after he had latched on to a cross from the right.

But Alfreton then went 2-1 up after a defensive mix up, where Slinn was unable to get to the ball in a crowded area.

It could have been another goal for Alfreton after they had outpaced the Sports defence, only to put the ball across the face of the goal.

But Mickleover still kept pressing forward, with a good build up just failing to connect with Milner, before Alfreton made another break with a shot straight at Slinn.

Alfreton did put the ball in the net after 79 mins, but it was ruled offside, before Gowing put Satchwell through only to have his shot blocked.

There had been a number of further substitutions for Mickleover, but they kept pressing forward, Gowing had wild shot over the bar, but Alfreton were almost through again before a saving tackle from Murray in the 86th minute.

But with a minute left on the clock Murray was dispossessed and the Alfreton striker piled in a powerful shot, tipped over the bar by Slinn.

So it finished 1-2 but there were some promising performances, returnee Bennett looked strong throughout especially on the overlap and the tenacity of Milner was a continuous threat for the Alfreton defence.

Next game is away at Frickley Athletic on Saturday, before returning to the Don Amott Arena next Tuesday when Guiseley are the visitors.