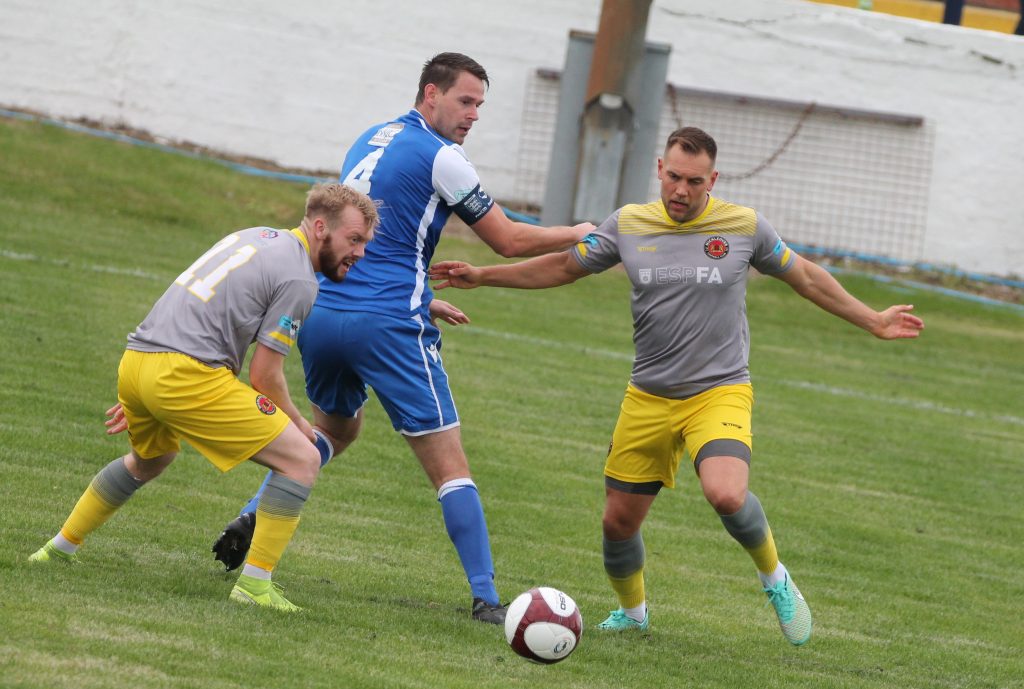 It was already a weakened side as Mickleover FC visited Frickley Athletic, with Stuart Beavon and Paddy Webb both out action and Phil Watt joining them pre-match too.

There was an almost instant shock for Mickleover as the game kicked off, when after only two minutes Frickley picked up the ball just over the halfway line and split a napping Sports defence, before burying the ball into the left hand corner for a 1-0 lead.

The shell shocked defence then faced an early corner, with a shot well wide.

Although the Sports midfield started to make progress, there were no clear breaks and each attack was thwarted, before Frickley came back to earn another corner which went straight out of play.

The first real break for Sports came after about 12 minutes, when Wright put a good ball through, only for Shannon-Lewis to be flagged offside.

A few minutes later McGrath sent a long pass in Bennett’s direction, but his attempt to cross was blocked and earned Sports first corner.

Shannon-Lewis pressed hard at the front but became somewhat isolated, as a succession of good build-ups failed to provide a positive final ball.

With Warren starting to take control in midfield, he sent Shannon-Lewis on a run after 20 minutes, but the strikers shot was blocked.

The attacks started to gain intensity as Sports sought an equaliser and Butler headed just over from a Wright cross.

On 25 minutes Wright tried his luck and shot just wide of the post, before Milner found Morris in space and the defender put his attempt just wide too.

But after a counter attack by Frickley was foiled, Shannon-Lewis broke away again and yet another shot was just wide. But as he started to cause more grief to the home sides defence, he was held by one of the defenders, but the following free kick came to nought.

Sports looked to be getting closer and closer to an equaliser, but Frickley were quick on the beak.

Gowing got a shot in from a Warren pass, and McGrath’s corner was blocked before he was fouled and another free-kick went to waste.

But after 36 minutes Bennett went on a run and was tripped in the area, so it was 1-1 as Warren made no mistake from the penalty spot.

Frickley reacted positively to the equaliser, but a couple of random shots were well wide.

After 40 minutes though Butler made a hard tackle which was adjudged too hard by the referee and he was on the receiving end of a rather harsh red card.

A quick reshuffle pushed Gowing back into the defence alongside Mills, but Mickleover continued to press forward with Warren just wide from a good pass from Bennett.

So 1-1 at half-time but manager McGrath made, three substitutions, taking himself off along with Slinn and Gowing and bringing on Ravenhill. Hawkins and Calderone.

There were further problems in the Sports defence when Mills was hurt after pulling off an overhead clearance. He continued after treatment, but was later substituted.

Despite being down to 10 men, Mills, Morris and Calderone combined at the back to repel the Frickley attacks. But the home side still managed a couple of shots from outside the area, both well wide.

Milner was penalised for challenge on the Frickley keeper, just before he went off to be replaced by Bobby Pattison.

Pattison’s pace soon got him clear for a shot in the 18th minute, but his attempt was well wide. Three minutes later Frickley made a quick break with Calderone the last man back, saving the day.

Frickley had started to come back into the game and after Warren and Ravenhill both lost possession in the middle, the following shots were straight at sub goalkeeper Hawkins though.

Once Mills had been replaced by Smith, plus the absence of Butler, the Mickleover defence began to look fragile, but Frickley’s following goal attempts were equally weak.

Monteiro came on for Shannon-Lewis and Satchwell for Wright for the last 20 minutes, but it was Frickley who went close with an overhead kick just wide of Hawkins post after 34 minutes.

Strength of character came through for the Mickleover squad, but Frickley had a few more near misses before the final whistle. Morris headed clear on 38 minutes and in the final seconds the home side put an attempt just around the post.

In the light of the knocks and the red card, it was a strong and positive performance, looking forward to the next friendly match at home to Guiseley on Tuesday evening.