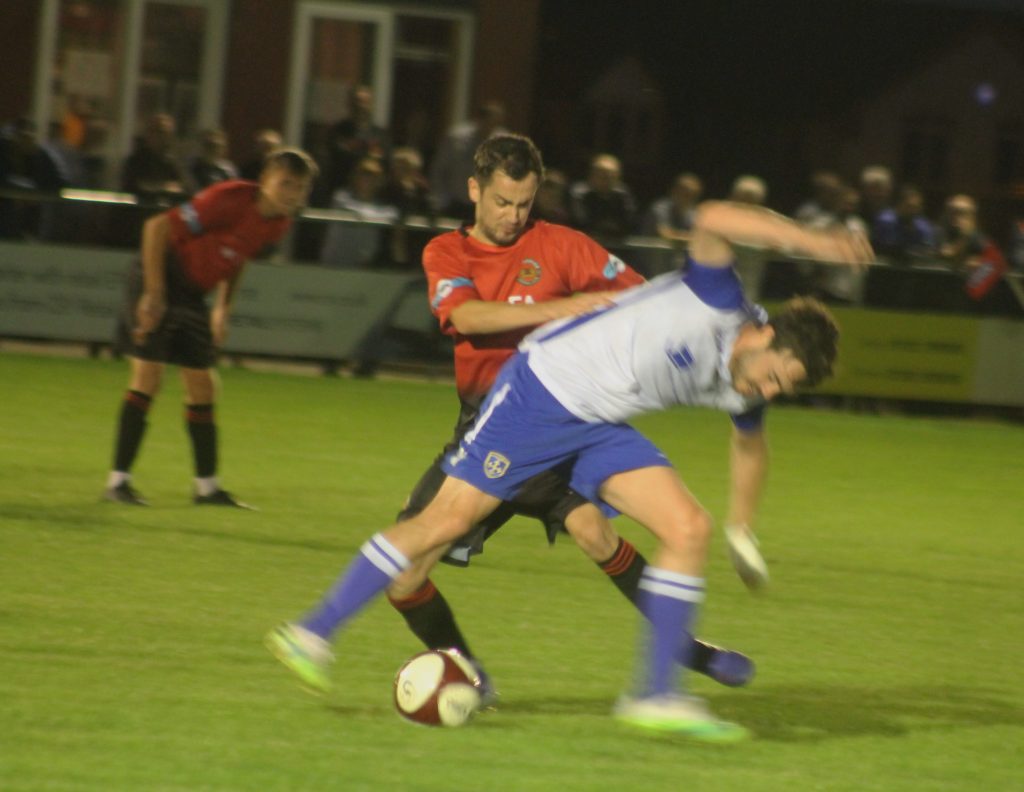 There were a few changes from last Saturday’s line-up at Frickley, with debuts for Jordan Walshaw and Declan Bacon.

Originally Aman Verma was due to start, but after failing a late fitness test, he was replaced by Mason Warren.

Sports were on the attack from the first whistle, with Gowing, putting a good ball through to Beavon, which sent Walshaw goalwards, forcing the keeper to dive at his feet.

Guiseley came back with an immediate response, which was easily foiled, before another Sports attack ended with Beavon being flagged offside.

But still in the opening minutes there was a long hold-up when Calderone was injured making a clearance. He was stretchered off and replaced by Satchwell, who went to left back, with Morris moving into the centre of the defence.

Satchwell was straight into the action from the restart, with a strong attack down the left earning a throw in.

A minute later Walshaw had a shot just wide, as Sports gained the upperhand.

Although Morris was caught in possession on the edge of the box after 16 minutes, the Guiseley attack failed to take any advantage.

Bacon was then fouled as he broke clear with Wright’s following free-kick put out for a corner. It was initially cleared, before Satchwell picked it up and went close with a powerful shot.

The attacks were coming thick and fast after some good play from Wright on the 20 minute mark, Bacon had a shot just over the bar.

Six minutes later Beavon’s shot was followed up by Walshaw, as it rebounded off the Guiseley keeper.

With Butler and Morris marshalling the centre of the defence, Hawkins in the Mickleover goal was having a quiet time, but had to punch clear for a corner after a retaliatory break.

Warren then split the defence with a good through ball, which proved just out of reach for Beavon’s run.

The visitors had a random shot bounce off the bar on 35 minutes, while two minutes later another shot was well saved by Hawkins and went for a corner.

Just before half time Butler’s clearance sent Wright on a run, with his final ball just failing to connect with the strikers. But Walshaw recovered the ball, only to shoot straight at the keeper.

There were no immediate changes for the second half, but Guiseley started much stronger than they had in the first half.

Hawkins had to stave off three shots in the first couple of minutes, but wasn’t really troubled by any.

The attacks continued to come from the visitors, before some good interplay between Bacon and Satchwell.

After 57 mins there was a scare for the visitors defence when a Wright corner was almost headed into their own goal, before Wright picked it up again with Walshaw just failing to connect to the through ball.

Guiseley’s shoot on sight policy wasn’t posing any real threat, whereas Mickleover were favouring the more controlled build up, highlighted by a long pass from Butler, sending Bennett on an overlap until he was tackled just outside the box.

The visitors put a header wide just after 65 minutes, but manager McGrath decided to make some changes. Smith came on for Bennett and Monteiro from Walshaw.

A mistake in the Guiseley defence fell to Beavon, his pass found Bacon who then shot over, before on 71minutes the deadlock was finally broken.

Warren had held off a strong tackle to put Wright through, who put a powerful right foot shot to the keepers left, 1-0.

It was barely a couple of minutes later though that a cross from the right left the defence flat footed, and a Guiseley striker finished with a clear header into the left hand corner of Hawkins net 1-1.

There was another change when Pennington came on for Warren, but Sports should have had a free kick after 79 mins, when Monteiro was held back by a Guiseley defender, with a clear run on goal beckoning.

In the closing minutes Sports came out stronger in attack again, there were a couple of wasted shooting, before Beavon had the ball, but couldn’t find space to get his shot it.

But it was so nearly a Mickleover victory, after Monteiro was tripped with minutes left. Beavon’s free-kick smashed against the Guiseley post and was pushed out for a corner, but it was game over with a well-deserved 1-1.

Next match is at home on Saturday against Peterborough Sports, before the NPL League matches start the following week.