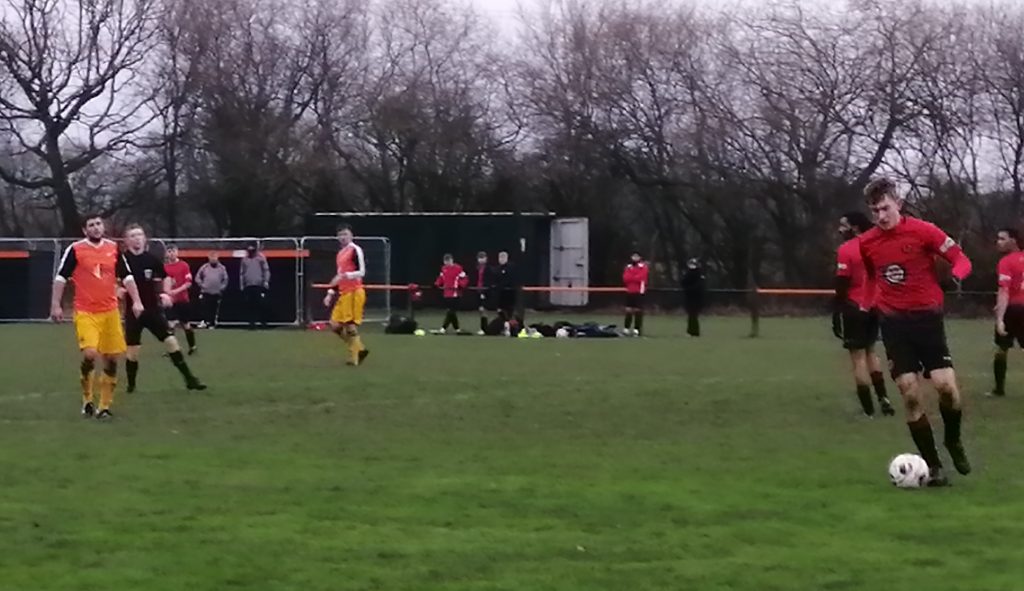 Mickleover Reserves fought back from an early red card, to take a hard earned three points away from their Central Midlands League South Division visit to Hilton Harriers.

It was a soft by playable pitch at the Mease and it was the home side that started the stronger, with Mickleover keeper Smith forced to save from a powerful early shot inside the opening minute.

Battisson then earned a free kick just outside the box, which was easily cleared by the Hilton defence, but the attacking prowess of Monteiro, Ayetine, Tefera and Battisson came to the fore. 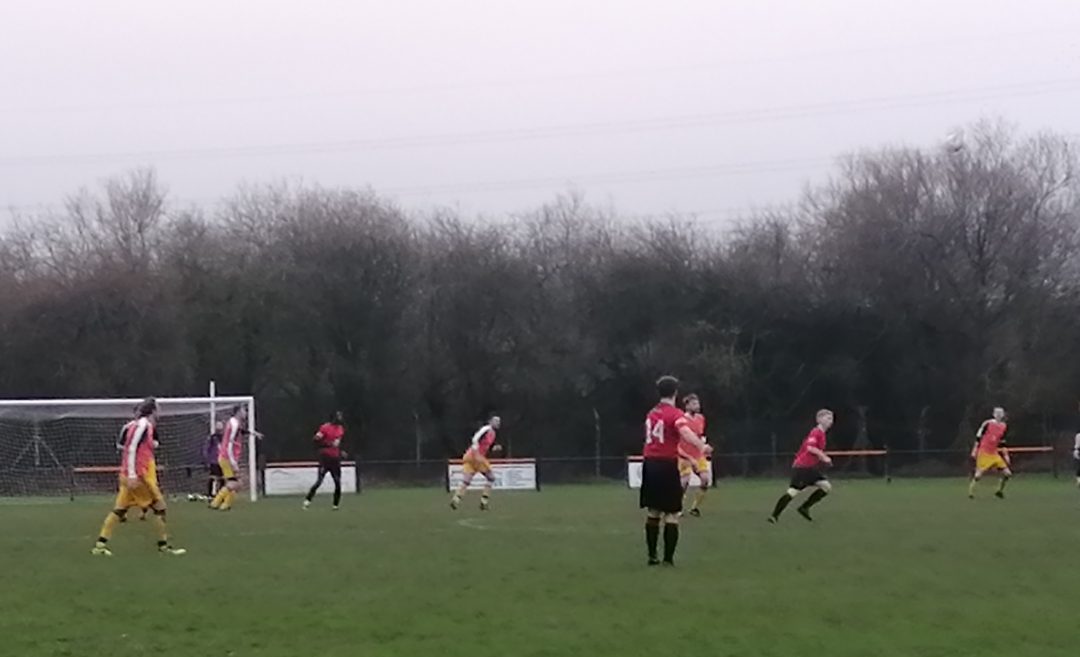 Hilton however continued to look dangerous on the breaks, but Monteiro was almost on the end of a good move between Ayetine, Battisson and Tefera, just losing out in a one on one with Hilton keeper Wood.

But an attack from Hilton after nine minutes was to cost Mickleover dearly, when Calderone fouled a home striker just outside the box and was straight red carded.

Mickleover continued to push forward, despite being down to 10 men with a through ball from Battisson reaching Monteiro, who was inches offside.

It was to be Monteiro’s last active part in the game, as he was forced to make way for Matt Fuertado who slotted into the centre of the defence alongside skipper Williamson.

While Mickleover started to get used to their new shape, Hilton piled on the pressure, with a 16th minute shot following up from a corner, just wide for another corner, before a foul on Williamson broke up their attack.

Two minutes later a Hilton header was just wide, but the Mickleover defence was looking strong and wing backs King and Eccleshall were both able to start threatening runs. 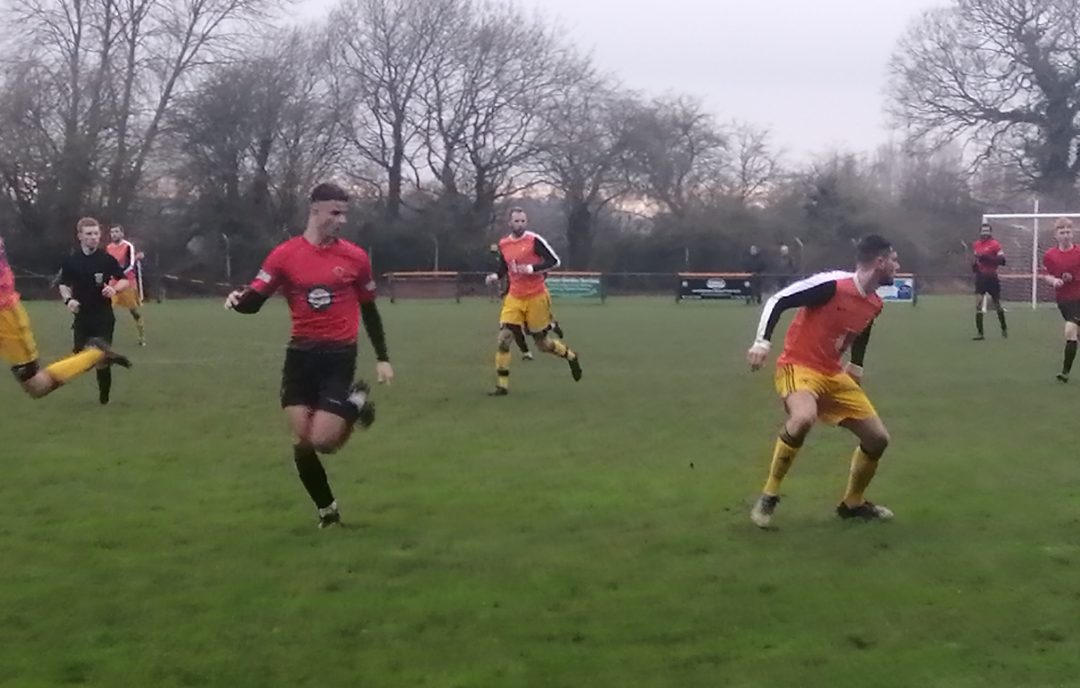 The deadlock was broken however in the 24th minute when a good build up saw the ball switched from right to wide left, before Battisson was picked up in the centre for a decisive and clear shot into the Hilton net 1-0.

It was still end to end however and only a minute later Smith was beaten at full stretch from a cross, but there was no one on the receiving end and the danger was soon cleared.

Tefera managed to find Battisson again after 28 minutes, but the tricky teenager couldn’t find the space for a shot, as the Mickleover pressure continued.

As the half time whistle edged closer, it was Ayetine’s chance to go close, after he was clear facing the Hilton keeper, who easily collected the shot straight at him.

So despite being down to 10 men, Mickleover reached half time with both optimism and a one nil lead.

There were no changes for the second half but it started badly, with a poor clearance from Williamson putting Eccleshall under pressure, losing out to Hilton who shot just wide.

But 49 minutes in and a strong shot by the hosts hit the post before the rebound had Smith beaten 1-1.

The equaliser seemed to wake the Mickleover side up as almost from the kick off, Battisson was charging forward again, only to be tripped just outside the box.

Mickleover had earned another corner in the 50th minute, and the kick was well centred into the goal mouth, where Williamson climbed dominantly to head home for 2-1.

The attacks seemed to have more purpose as Sports began to look to secure the three points, and only a minute after the second goal Massampo had held the ball well only to be fouled on the edge of the box, but no free kick this time.

Both Massampo and Battisson had shots from outside the box saved, but keeping Hilton keeper Wood on his toes.

But it was so nearly a third when King’s run helped him get a cracking shot in from outside the box again, but with the keeper beaten it hit his left hand post.

Fin Barker replaced Ayetine after 76 minutes, but both sides continued to press, with Hilton missing out in a one on one when the shot was pulled wide.

But the third goal did come with three minutes of normal time remaining. Eccleshall came from the half way line and just kept running and running down the left flank, before cutting in solo to fire a perfect shot into the roof of the Hilton net, 3-1.

A good all round performance with three well taken goals, which now moves Mickleover to up fourth in the table, with games in hand against all of the teams above.

On a cold winter’s afternoon we took the short trip along the A416 to Hilton, unless you were coming from the Alvaston area and then it would have been the A50. Due to the Covid the dressing room areas were out of bounds and the players had to get changed in their cars. Large Gus obviously isn’t used to these primitive surroundings and forgot he had been wearing his best friends tights last night and was still wearing them when he went out to warm up.

This was the return fixture from 2 weeks ago when we ran out 2- 0 victors in a close fought encounter.

The game started well with the team putting together some crisp passing moves with Bobby B looking sharp and lively.

The game changer happened on the 10 minute mark when Marcus Calderone was turned by the experienced James Rushby (ex Sports 1st team). Marcus did put an arm on James but he went down rather easily.

The following should be taken into consideration by the referee when making a decision as to the severity of the crime.

The following must be considered:

When I asked the referee at half time why Marcus was sent off he said and I quote “It was an easy decision because it matched the four criteria (above) The last two are the questionable ones – the ball was at least two yards away from the player so unlikely that he would gain control and Gus was behind and to the side so could have intervened.

Anyway he was sent off and we needed to make a change. Unfortunately for Will Monteiro who had started the game well, I decided that we should take him off as it would keep the team as a group more compact. Will’s pace is great at stretching teams and getting behind but given the length of time that we would have a man less I felt Jude would be the better option.

Despite the reduction in playing staff we took the lead with a well-constructed goal, finished with aplomb by Bobster Battisson( I call him Bobster as he is just like my daughters wee dug – never stops running and always wanting the ball) after shifting the ball to the side of a defender his crisply struck shot dipped like a Ronaldo free kick into the pokey!

At half time the message was to keep our shape and not leave gaps between the defence and midfield and allow them to play the ball out from their back four.

It worked really well for about six minutes when they got a foothold back in the game. A couple of sloppy passes let them get in what was a bit of a tame cross and after a stramash in the goalmouth it was all square.

Like any team with the man disadvantage, we were put under a lot of pressure but the back 8 dealt well with the pressure. At one point Gus Williamson even had the time to have a long distance chat with me!

We were still seemingly getting on the wrong end of refereeing decisions – apparently it’s okay to stamp on a players foot twice without getting a warning and then in the second half the same happened with the same player with the same result – he haw!

Sorry to use the F.A. Laws but the ref started it. There is misconception that if you get the ball it’s okay.

“Any player who lunges at an opponent in challenging for the ball from the front, from the side or from behind using one or both legs, with excessive force or endangers the safety of an opponent is guilty of serious foul play.”

No mention of getting the ball!

At the edge of the box we had a player who just had one player to beat and he was for want of a better description, ‘wiped out’ by a tackle from the side. It is beyond my understanding how the referee allowed the play to carry on.

However the best was still to come.

One of the things we try and install in the players is that at set pieces, if we have a plan and the opposition don’t know it, it is a great advantage. Of course it depends on great delivery and the ball put in by Louis, at pace between the penalty spot and six yard box was sublime. What made it, was the leap and the perfect connection by Gus Williamson to rocket a header into the net. If it wasn’t for the net the ball would have walloped one off Don Amott’s caravans!

Then in another attack Larell King beat a couple of players and whacked a great shot off the keepers right hand upright, the ball rebounded back to Jude who was central and with speed of thought – rather than put the ball in the net where they can get it back quickly I’ll blooter it as far as possible over the bar and far away!

Not since Long Eaton away last year have I seen a more sweetly stuck shot that came off the left boot of one Tom Eccleshall – having marauded down the left assisted by Loopy and Surf he strode into the box and from 16.34 yards unleashed “the beast” There is not a goalkeeper on this planet that would have saved it.

After that we had a couple of scares as Hilton continued to press but we held on t the 3-1 scoreline.

And now here’s the rub – I thought Gus equalised and Tom scored the winner!

Good to see Don Amott the head of Mickleover in attendance and to be fair there was a decent crowd, which included Archie Gemmill who would have loved the sticky surface although a bit like the Baseball Ground on the first day of the season.

Also good to see quite a few players with Hilton who I enjoyed working with previously. I would like to thank Hilton for their hospitality and playing the games in a sporting way – they don’t make the decisions :-).