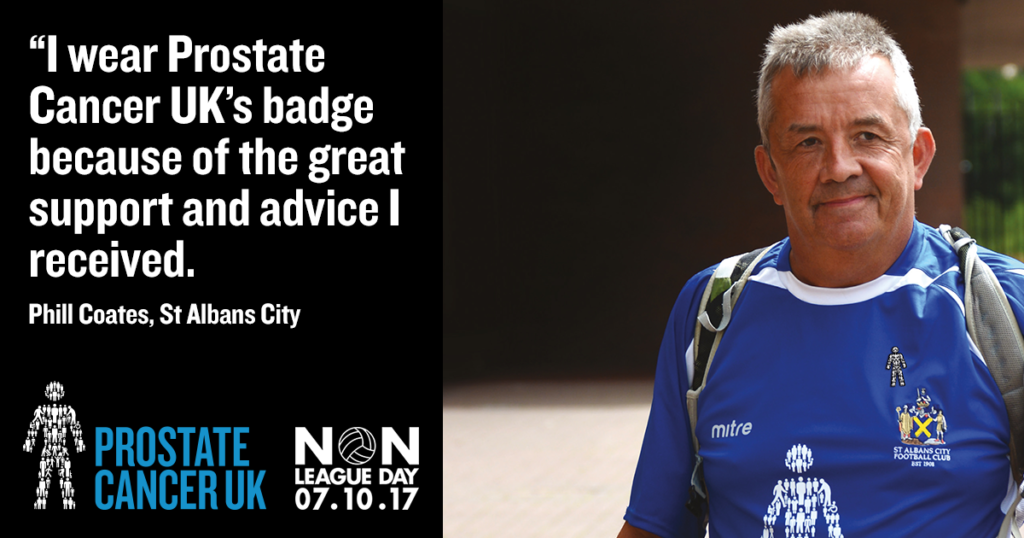 Saturday 7th October is Non-League Day where Sports will take on Ashton United on Saturday (3pm) at the Don Amott Arena.

In support of Non League Day for Prostate Cancer UK, Sports chairman Don Amott has kindly offered to provide free match programmes to all supporters (although a donation to Prostate Cancer would be more than welcome!).

In addition, season ticket holders from any league club can enter the ground for half the normal price upon showing a valid season ticket. 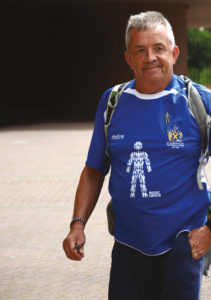 Once known by the St Albans City faithful as club mascot Sammy the Saint, Phill Coates tells us why Non-League Day’s partnership with Prostate Cancer UK means so much to him and why he wears his ‘Man of Men’ pin-badge with pride.

“I wear Prostate Cancer UK’s badge because of the great support and advice I received from the charity when I was diagnosed with prostate cancer in August 2014.

“It was lucky that I visited the doctor when I did. If I’d gone earlier, I may have avoided invasive surgery; but if I’d gone later, the cancer may well have spread.

“After my diagnosis I found the service I received from Prostate Cancer UK invaluable, particularly from the Specialist Nurses and a member of the fundraising team, Sam, who would speak to me every couple of weeks.

“Sam was great and it felt like I had a friend at the end of the line. Whilst chatting he mentioned the Football to Amsterdam bike ride to me which felt like the incentive and challenge I needed after having surgery just two weeks earlier.

“I’ve come a long way since then. I’ve walked ten marathons with Jeff Stelling, cycled three Football to Amsterdam bike rides and have worn my badge to raise awareness just like Jeff and the guys on Soccer Saturday.

“As well as support from Prostate Cancer UK, I’ve also felt supported by my club, St Albans City FC, and I’m so pleased that they’re backing Prostate Cancer UK and Non-League Day’s partnership once again, so that we can get the message out to even more men and their families.”

Join Phill in the fight against prostate cancer. Text BADGE to 70004 to donate £5* and get a badge to wear with pride.