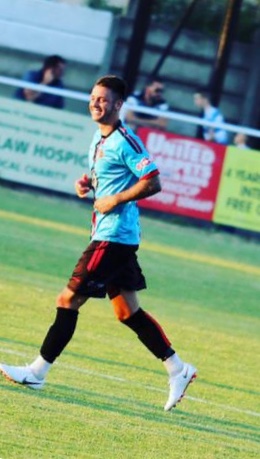 Mickleover Sports Club are proud to announce the signing of Ben Turner.

Ben Turner – “I am happy to be re-signing for mickleover sports, I feel last year was a false position we found ourselves in and I feel there’s unfinished business and want to be competing at the right end of the table. There’s only a couple of teams that can compete with us footballing wise and under the gaffer and trust in the players coming in and what we have, I feel we can give it a right go next season so  it was an easy decision to commit to the up and coming season.”

John McGrath – “I am delighted that Ben Turner has committed to us for another season. Turns in my opinion is the best left back playing not only in our division but two or three divisions above us. His consistency is his strength and never he falls below 7/10 week in week out. Equally adapt at playing centre back Turns has been an ever present in my teams over the last 3 seasons. He’s a marauding full back who is just as comfortable in the attacking third and it’s this versatility that causes opposition teams so much trouble. We fought off a host of suitors to keep him with us, and it’s a massive show of intent from us as a club.”