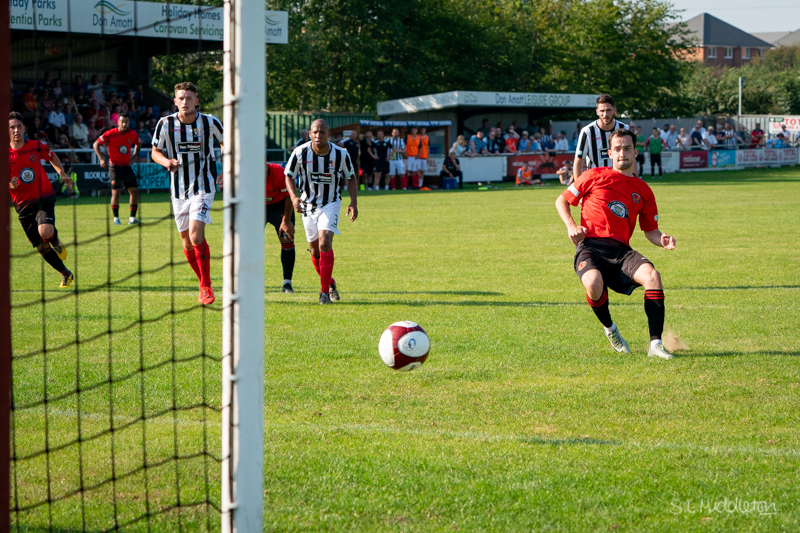 Mickleover Sports made it three wins out of four, after they beat Stafford Rangers thanks to a late goal by Mason Warren from the spot.

It was a game of few chances but when it came to step up to the plate, Mason Warren certainly held his nerve.

The win now puts Mickleover Sports in eleventh place after three games in the league, but they are yet to score from open play.

The game was very slow to start, partly due to the heat, but also because both teams were trying to work their way into the game.

The first chance fell to Stafford when ex Mickleover striker Evan Garnett was played in on goal. Thankfully for Mickleover’s back four though, Nathan Broome came off of his line brilliantly to smother the ball into his chest and away from any danger.

It was now Sports’ turn to test Stafford’s keeper Lewis King, formerly of Mickleover Sports. Mason Warren tried to catch out the former Sports shot stopper, as his early cross-cum-shot from outside the box nearly caught him off guard.

Nathan Broome continued to show his class throughout the first half. Around twenty minutes into the first half the loanee produced a fantastic double save from close range to deny the visitors the lead.

All of his efforts were for nothing though, as the linesman waved his flag for offside.

There were little to no chances for either team for the remainder of the half. Stafford certainly had the better chances, but Mickleover were playing the ball around more.

The half time whistle also provided the players and fans alike a chance to cool off and refresh.

The second half gained momentum quite quickly, as within five minutes Mason Warren’s delightful ball into the box had a Mickleover players name written all over it but unfortunately it was headed out for a corner.

Sports came close roughly five minutes later when Jake Scott’s volley from inside the box was saved. Stafford duly replied with a shot of their own, but Broome was there yet again.

The game was intensifying as both teams knew that time was running out. Mason Warren whipped in an almost identical ball to the one from earlier, but yet again there was no Sports head able to get on the end of it.

As quickly as the game intensified, it also died down. Neither team were able to break the opposition down. Both teams were relying on long ball’s and counter attacks in order to score.

Mickleover finally got their chance to score after Nathan Modest was vigorously pulled down in the box.

Mason Warren stepped up with nerves of steel, and when the referee blew his whistle Warren calmly slotted the ball into the bottom right hand corner as well as sending the Stafford goalkeeper the wrong way.

Mickleover defended for the last five minutes or so as if their lives depended on it and when the final whistle eventually blew there was a massive roar of ecstasy.

The win meant that Mickleover now sit in eleventh place as well as maintaining a 100 percent win ration at home this season. On the other hand they haven’t scored from open play yet in the league, something that will surely come sooner rather than later.