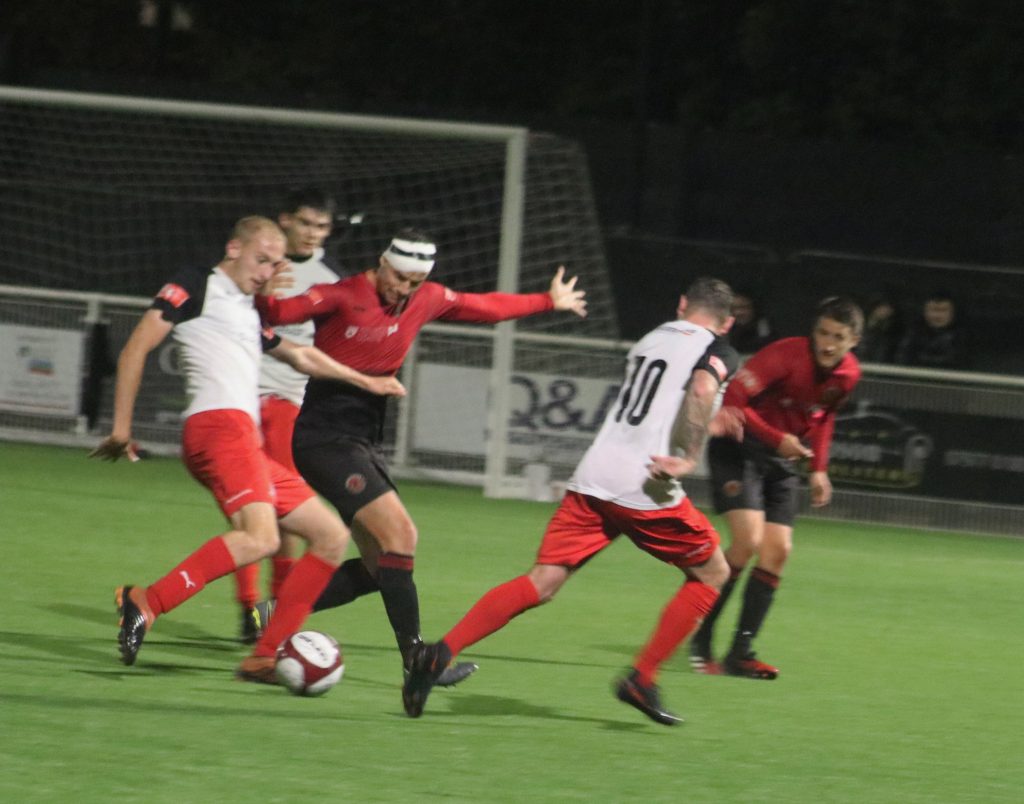 On a wet fairly miserable night, there was no shortage of action as Mickleover hosted Bamber Bridge in the NPL. But it was to end in disappointment, when the visitors scored the decisive goal with only three minutes to go.

The visitors were straight into attack, with Watt having to clear the danger in the opening minutes, before a further cross into the box after five minutes came to nought. 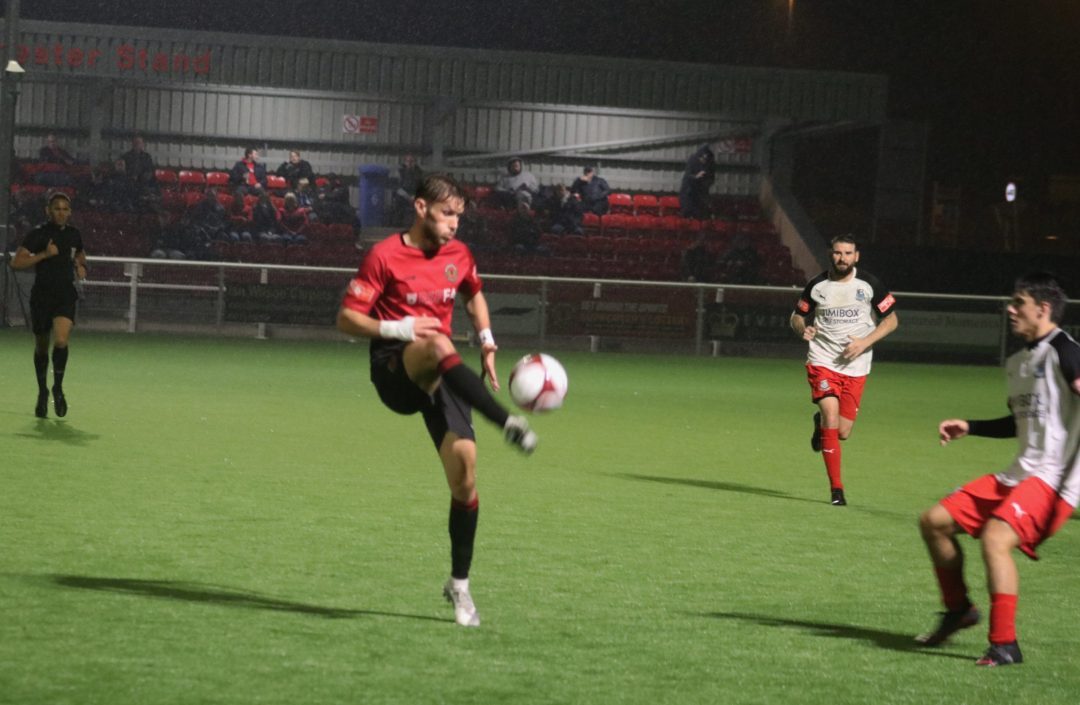 As Sports started to settle they began to attack more too, with Holmes forcing a save from Keeper Hewelt, from the narrowest of angles on the right.

After Bamber had a shot over the bar following a ninth minute corner, Dales got clear on the left and put in a cross to Ravenhill on the right but his shot was easily collected.

It was back to defence though almost immediately, when Hawkins pushed a way a powerful shot from outside the box.

Breaks for both teams continued to provide the end to end action, as the rain continued to fall. But after 19 minutes Bamber were through again, but despite finding space, the finish was both high and wide.

A short corner from Warren two minutes later found Holmes, whose shot was blocked, but Bamber broke clear yet again putting the ball across the face of the Mickleover goal with no one on the receiving end.

Dales had another good try 23 minutes in, when Beavon found him on the left, he twisted and turned before shooting just wide. Holmes was almost through a couple of minutes later after a good build up. 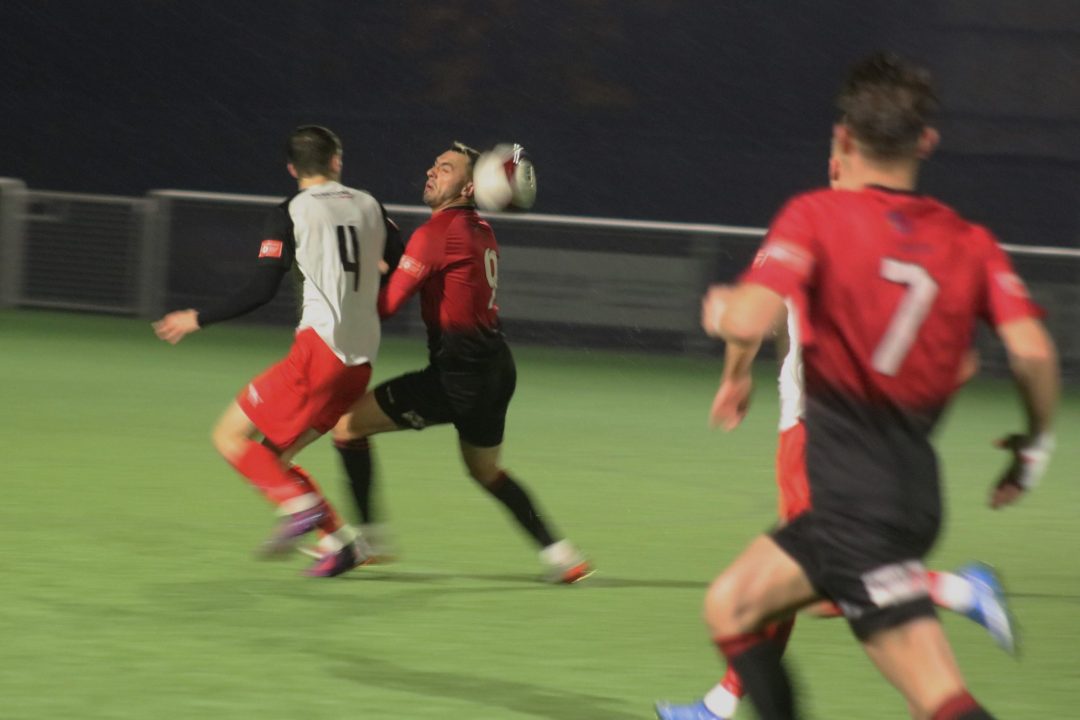 Butler and Watt were coping with the Bamber barrage, which continued mainly on the break, but neither Bennett nor Lewin were finding the opportunities to overlap.

While Warren and Ravenhill were feeding the ball through, both Holmes and Dales fond their space on the wings restricted, leaving Bacon and Beavon isolated up front.

Ravenhill had another shot on target after 31 minutes, picking up the ball after Bacon held it in the box, but was unable to turn.

Hawkins had to be on his guard when Bamber tried a cheeky back heeler after a cross from the right, but the Mickleover keeper had it covered. Holmes then brokeway to find Ravenhill again, whose shot was put out for a corner.

There was a hold up when Watt had cleared the danger, but received a cut to his head. When play restarted there was just five minutes left of a very even first half.

Just before the whistle Warren broke down the left, picking up Dales and his shot from a tight angle was just wide again.

Bamber weren’t finished either as Hawkins had to save a powerful long shot with his feet to keep it 0-0.

Both Beavon and Lewin had been yellow carded in the first half and as they re-appeared for the second, Morris was on for Lewin. 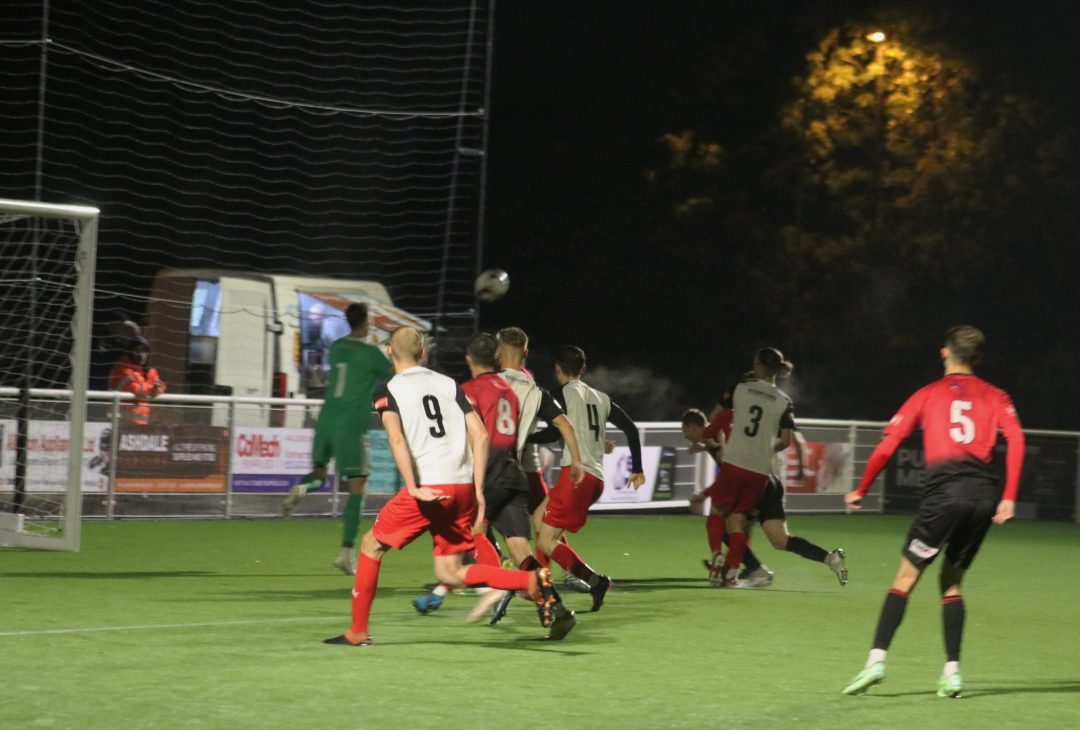 It was a positive start to the second half for Mickleover, with Dales almost able to deliver in the first minute after Bacon held the ball well in the box.  Skipper Warren then put in a deep cross towards goal from the right. It had the keeper beaten, but came back off the far post.

After the initial threat for the visitors they were back threatening too, going close after 50 minutes, before missing one of the best chances of the game. Unchallenged on the by line, the cross went across the face of the Mickleover goal, missing everyone.

Bennett finally managed to make a break and got right through the defence before his shot was blocked, but then after 55 minutes Dales smashed a shot against the underneath of the bar. It appeared to have moved the netting and as it bounced out Butler put it in the back of the net.

It looked like the opening goal, but the referee had given offside against the Butler goal and failed to acknowledge Dales’ attempt. 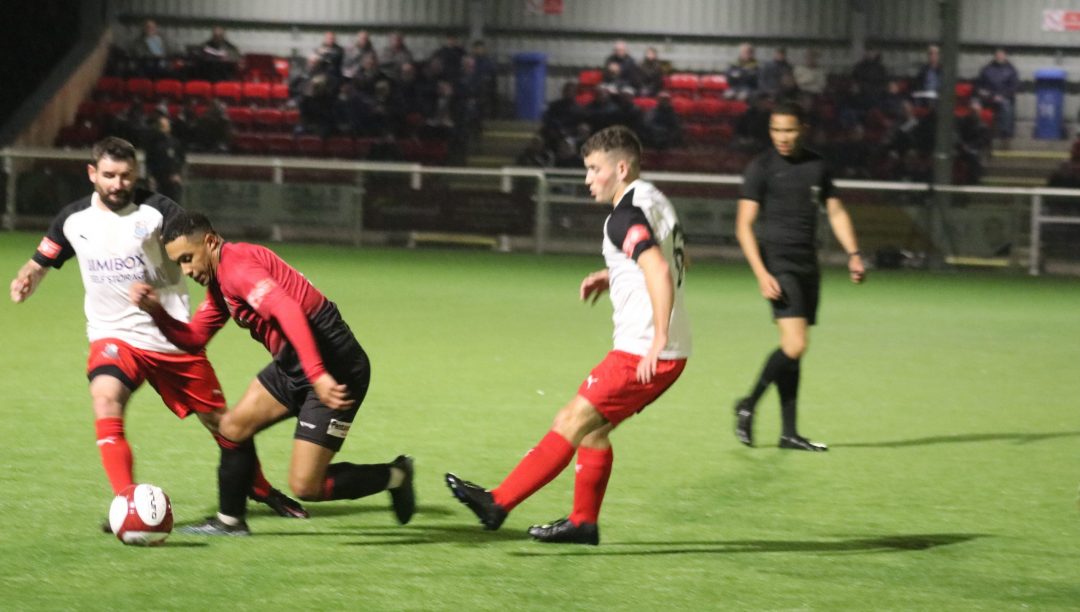 With Battisson on for Ravenhill, Mickleover started to build the pressure on the visitors for a while. 65 minutes and Bacon had an excellent chance, with the inviting goal beckoning only yards in front of him, but the shot was wide.

Holmes then cracked in a shot from outside the box, punched over by Hewelt for a corner. But then it was the visitors chance to take the lead again, only for their effort to go sky high over the bar.

Beavon had the keeper at full stretch after 71 mins and two minutes later he was on the receiving end of a good cross from Battisson, earning another corner. Wright then came on for Holmes but it was still 0-0, with both sides failing to put away the chances.

Bennett then came charging through again, but was hacked down on the edge of the box, but no free kick given to Mickleover, but it was to the visitors strangely.

As the game looked to be heading for 0-0, Rob Apter broke the deadlock with a goal for the visitors, after the defence failed the clear their lines, from what barely looked a threat initially.

With only three minutes to try and salvage a point, the downtrodden Sports team pushed everything forward. There were a couple of corners and goal mouth scrambles, but unlike our visitors, luck had deserted us and it remained 0-1.