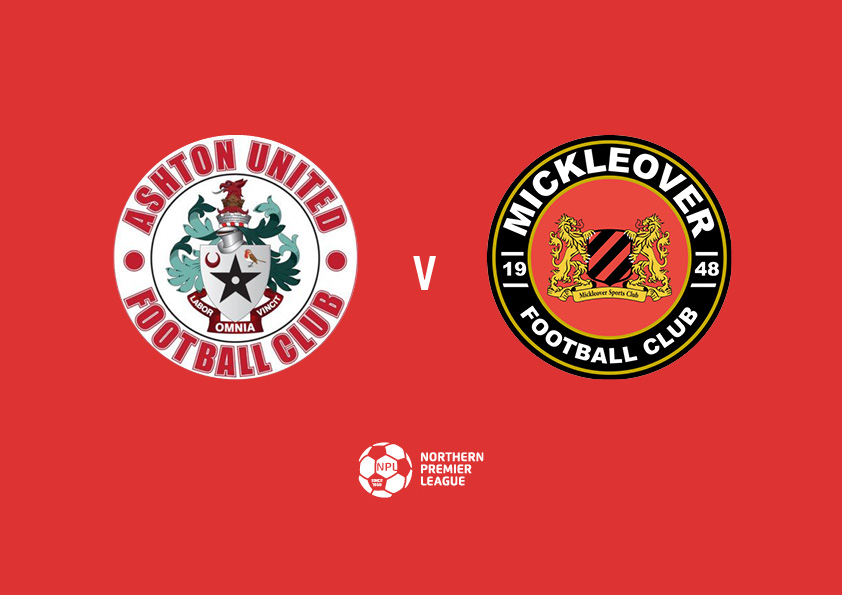 Mickleover are back on the road again for the second successive week, as they head to Ashton Utd on Saturday.

Our hosts are also struggling this season and are currently level on points with Sports, but lie 18th due to superior goal difference and also have four games in hand.

When Ashton visited the Don Amott Arena earlier this season, Mickleover were 2-0 winners and they have also lost two of their seven NPL home games.

They have only played one league match in December, going down 0-2 at Buxton.

First choice goalkeeper is the vastly experienced Greg Hartley. He progressed through the Manchester City Academy, winning the FA Youth Cup, while playing alongside Kasper Schmeichel and Joe Hart during his time at City.

He spent ten years at City before moving to the US where he plied his trade at Georgia Gwinnett and Chattanooga. Following a seven-year stint in the US, he moved back to England, joining Oldham Athletic in 2017 where he worked with the academy and as a goalkeeping coach.

During his coaching Hartley also played for Tadcaster Albion and Atherton where he worked under Ashton United manager, Michael Clegg for the first time.

Defender Harry Spratt was a pre-season signing from York City. He was a Manchester Utd junior and then moved onto Huddersfield, before joining York and was also on loan at Scarborough last season.

Also in defence is player coach Michael Raynes. He joined Ashton United in July 2020 after a two-season spell with National League side Hartlepool United. As a journeyman of professional football Michael came to Ashton with a wealth of experience and knowledge as well as talent.  He played almost 500 league matches at Stockport, Scunthorpe, Rotherham, Oxford, Carlisle and Crewe before joining Hartlepool. Standing at 6”4 Michael is the monster amongst the Robin’s back line.

Centre back Harry Coates was another new signing for this season, having arrived from Scarborough. He started his career at York City, before moving on to Harrogate, Tadcaster, and Bradford PA.

Michael Brewster is a midfielder in his third season at the club. After leaving Oldham as a junior, he moved on via FC United, St Mirren, Colwyn, Skelmersdale, Southport, Shaw Lane, Marine and Droylsden, before coming to Ashton from Atherton Collieries.

He played over 250 games for Atherton and was an essential player for the Colliers, especially in their promotion winning season from Division One West. He was the first player manager Clegg, signed after taking over at Ashton.

Striker Tom Bentham was one of the scorers in their win over Matlock on the opening day of the season. He was a summer 2020 signing, rejoining manager Clegg having tasted success with him at Atherton Collieries. He’s a strong centre forward, having also played at Hyde and Stalybridge.

Liam Thomsett is one of the longest serving players, having signed for Ashton in 2017. An ex Blackpool youth player, he made one first team start in the FA Cup, before moving on to Altrincham, Ayr Utd and Hyde on loan.  After a year at Fylde, he was at Curzon Ashton for another two, before his current spell at Ashton.

Harvey McAdam was a former Burnley junior, who joined the Ashton in February 2019 from Nelson FC. After his release from Burnley the young midfielder joined AFC Fylde’s under 18s before moving again to Northwich Victoria.

Another new signing for this season is midfielder Tom Warren. He was an Everton junior until September 2019, from when he joined Warrington, prior to joining Ashton.

Experienced midfielder Sam Sheridan has been at Ashton since January 2018. He started out as a Bolton Wanders Junior, with a loan at Altrincham before joining Stockport County. A further loan at Southport, preceded spells at Barrow, Chorley, FC United and finally Altrincham again from where he joined our hosts.

Ivory Coast born striker Florian Yonsian came to Ashton last month and soon became a regular in the side. He was a Junior at both Rochdale and Salford City, before being loaned to Stafford and Marine. He then moved onto Trafford and spent last season with Stalybridge Celtic.

Osebi Abdaki is a Nigerian striker, with a vast amount of experience mainly in the North East. He was at Ashton in 2010 after spells at Altrincham and Stalybridge, but moved on again to Salford, Halifax, Nantwich (two spells), Ramsbottom, Buxton (two spells), Stafford, Hednesford, Matlock and Barwell, before arriving for his second Ashton spell in October from Stourbridge.

Midfielder Liam Loughlan is currently on a months loan from Salford City. He started at Leicester City, having also had a spell at Farsley Celtic.

Veteran centre back Nicky Hunt was signed in July this year, from Darlington. He was a Bolton junior player, loaned to Birmingham and Derby, before joining Bristol City on his release in 2011. Spells at Preston, Rotherham, Accrington, Mansfield, Orient, Notts County and Crewe preceded his move to Darlington in July last year, with 500 league appearances under his belt.

He is also the first team coach and an ex England Under 21 International.

Oliver Martin is currently second choice keeper, signed from Ramsbottom in September. From Fleetwood’s Academy originally, he has also played for Stalybridge, Ange IF in Sweden, New Mills, Mossley and Radcliffe.

Defender Will Hall is on loan from Altrincham. The former Salford City Junior has also been loaned out to Whitchurch and Ramsbottom.

Andreas Bianga is a midfielder who started out as a Burnley Junior. He has also played for Droylsden and Curzon Ashton.

Parabou Jenkins is a start of the clubs youth team and who has only recently graduated to the first team squad.

Kick off at Hurst Cross is at 3pm.