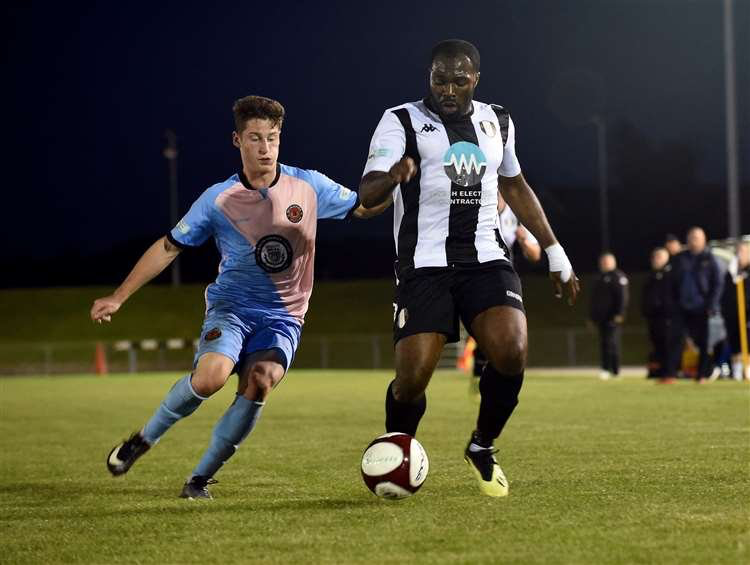 Mickleover Sports were held to a draw at the South Kesteven Sports Stadium as Grantham Town’s early goal was enough to earn a point for the home side.

The goal scorer for Grantham was none other than former Sports striker Chib Chilaka who takes his goal tally to two goals in as many games for the Gingerbreads.

Sports started off the better team as just two minutes into the game Lee Hughes thought he scored his first goal for Sports. Hughes beat his man to direct the ball into the top corner after a corner from Mason Warren, but unfortunately for him the linesman ruled it out for offside.

Sports continued to dominate possession and it wasn’t long until they produced another fine chance. Lee Hughes again headed the ball towards the top corner but it was dramatically cleared away for a corner.

Grantham Town started to get themselves into the game a little bit more. Chib Chilaka was one player who definitely stood out for the home side and it clearly looked like he was out to prove a point.  He first tested Mickleover with a shot from distance that caught everyone by surprise as it nearly found the top corner.

It was only a few minutes later though, when Chilaka would break the deadlock. He curled the ball into the top corner from a tight angle after forcing his way past Durrell Berry.

Mickleover didn’t sit back despite going a goal behind. Lee Hughes was again at the forefront of Mickleover’s attacks when his powerful shot from inside the box was parried away for a corner.

Grantham were very clearly trying to hold onto their lead by any means necessary which made it increasingly hard for Mickleover to penetrate into their final third.

It wasn’t until the end of the half until Mickleover started to worry Grantham Town. Lee Hughes was clearly brought down in the box as he turned the defender marking him meaning that Sports would have a chance to level the score before the break.

The referee blew his whistle, but somehow not in favour of Mickleover who were shocked along with everyone else in the stadium about the decision that was made.

The first half ended in controversy and Sports were undeservedly trailing, but thankfully they had the second half to try and level things up.

Just like the first half, Mickleover hit the ground running. Even though the chance amounted to nothing Lee Hughes’ back heel from a cross nearly crept into the far corner of Grantham’s goal.

Although Grantham didn’t have many chances during the game they did force a fantastic save out of Louis Jones who was forced to save a header that was flicked right into the top corner.

Sports would eventually get their goal. Top goal scorer Mason Warren who had dictated the play like he does every game for Mickleover scored in the 81st minute to level things up.

His powerful shot from outside the box caught everyone off guard including Grantham’s keeper as it flew like a rocket into the back of the net.

Sports pushed for a winner and they nearly got one when Captain Jake Scott had a header tipped over the bar with only a few minutes of normal time left.

Although they deserved more from the game, a point keeps Mickleover close to the playoffs in 8th place. They will entertain Ashton United in their next game at the Don Amott Arena where they will hope to keep their 100% win ratio going.