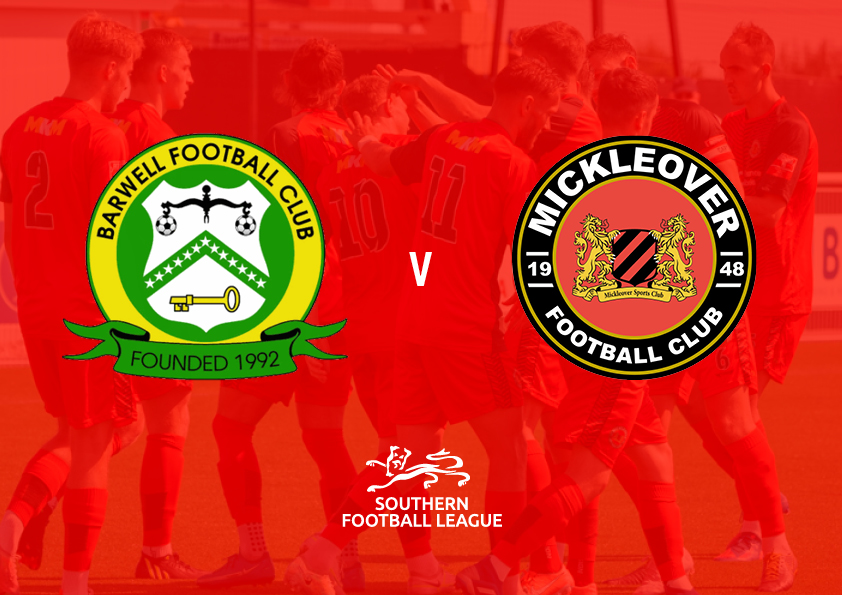 It’s back on the road for Mickleover this Saturday, with a short trip to Barwell as they resume their Southern League Premier Division Central campaign.

With Joe Bateman still suspended and George Milner having left the club this week, Sports will be hoping that Andy Dales, Marcus Marshall and Jake Bennett are fit for action.

Sports will looking for their third successive away win in the league, following success at Ilkeston and Rushall, as well as making up for the disappointing FA Trophy defeat at Stowmarket last weekend.

Mickleover are now 16th in the league, with our hosts 20th and still seeking their first home win of the season.

Ian King has been in charge since May and has kept a fairly stable line-up so far, but with just away wins at Ilkeston and Royston, they have taken a point off Alvechurch, Rushall and Kings Langley and also went out of the FA Trophy last week 1-3 to Gainsborough.

First choice goalkeeper Andy Wycherley started his career with New Saints and Guilsfield in Wales, before  moving on to Telford Utd. He has also played for Solihull Moors, Hednesford, Nantwich and Halesowen and was at Rushall for one month before arriving at Barwell in July.

With Wycherley give a straight red card last week, second choice Elliott Lawson will probably be between the posts.

Derby born Micah Edwards started off as a Rams Junior, before the young midfielder had spells at Ilkeston and Gresley Rovers. He has been at Barwell since July 2019.

Centre back Kyle Rowley arrived from Stourbridge pre-season. He was a Walsall Junior and after a loan at Sutton Coldfield, he joined Rugby following his release. Moves to Alvechurch, Walsall Wood and Hednesford followed, before his seven months stay at Stourbridge.

Herve Pepe-Ngomi joined Leicester City’s Academy from St Etienne. Another centre back he went to Nuneaton on his release, but after spells at Kettering and Boston Utd he had a career break.

After three years out he joined Coalville in July 2021 and moved to Barwell two months later.

Midfielder Max Brogan has scored five goals this season. He was signed from Coleshill Town last season and previously had a spell at Tamworth.

Brady Hickey is the club captain and central midfielder, who came from Nuneaton in January 2018, having moved in the opposite direction only seven months earlier. Like Brogan he has scored five goals too this term.

Jack Deakin is a midfielder too, currently on loan from Mansfield Town, having previously been at Sheffield Wednesday. He scored in both of the last two league games too.

Beck-ray Onoru is a winger or striker signed pre-season. He has scored two goals and already been a “man of the match.”

Striker Tiago Nassunculo was a pre-season signing from Redditch, having previously played for Peterborough Sports.

George Ward is a defender on a dual registration with Weymouth during his time at Loughborough University. He had played for the University side too, as well as Bromsgrove, before joining Barwell last month.

Albanian born Melis Bushaj is a young left back who started out with Solihull Moors. He was loaned to Leamington, before being released to join Barwell pre-season.

Dominic Brown-Hill is a midfielder who first came to Barwell in 2018 after his release from Notts County. After 18 months he moved to Alvechurch, but returned in July 2021.

Striker Michael Heading hails from Washington DC, but started his career at Northampton Town. After a loan at Kettering he joined St Ives Town, before moving to Beaconsfield November last year. He was another pre-season signing for Barwell.

Cam Moore is another striker signed last month from Redditch, having only joined them two months earlier. He is a former Bolton Wanders Junior and has also played for Loughborough University, Prescot Cables and Stalybridge Celtic.

Already well known to Mickleover is Bermudan International midfielder Roger Lee. He joined Barwell in July from Loughborough Dynamo, having joined them from Mickleover in January.

He has played for Kalev Talinn in Estonia, FK Jurnieks in Latvia, as well at Stafford, Corby, Basford, Stamford, Rugby and West Super Mare, after spending his early career at home in Bermuda.

Sid Kerr is a defensive midfielder, recently arrived from Loughborough Students. He made his debut in their last league match and has also been on the books at Everton, Chelsea and Brighton.

Deen Master is another midfielder too. He attends Nottingham Trent University and has also played for Leicester Nirvana.

Centre back Elliot Percival came to Barwell from Sheffield Wednesday in August  2017, having joined them a year earlier from Leicester City.

Jake Pemberton was summer signing from Wantage. He started at Reading and was at Loughborough University for two years, before moving to Wantage.

Tolani Omotola is a striker in his second spell at Barwell. A Tranmere Junior, he played for Altrincham, Buxton, Corby and Coalville, before arriving for the first time in Jul 2019.

After just over a year he moved to Hyde and played for Alvechurch, Carlton, Stafford and Atherton, before arriving back at Barwell from Burscough in August.

Midfielder William Warren is in his second season at the club, while defender Callum Stewart and striker James Pye have been on the bench, but yet to make a start.

Kick of as usual is 3pm and as it’s only about 40 miles, your support would be most welcome.