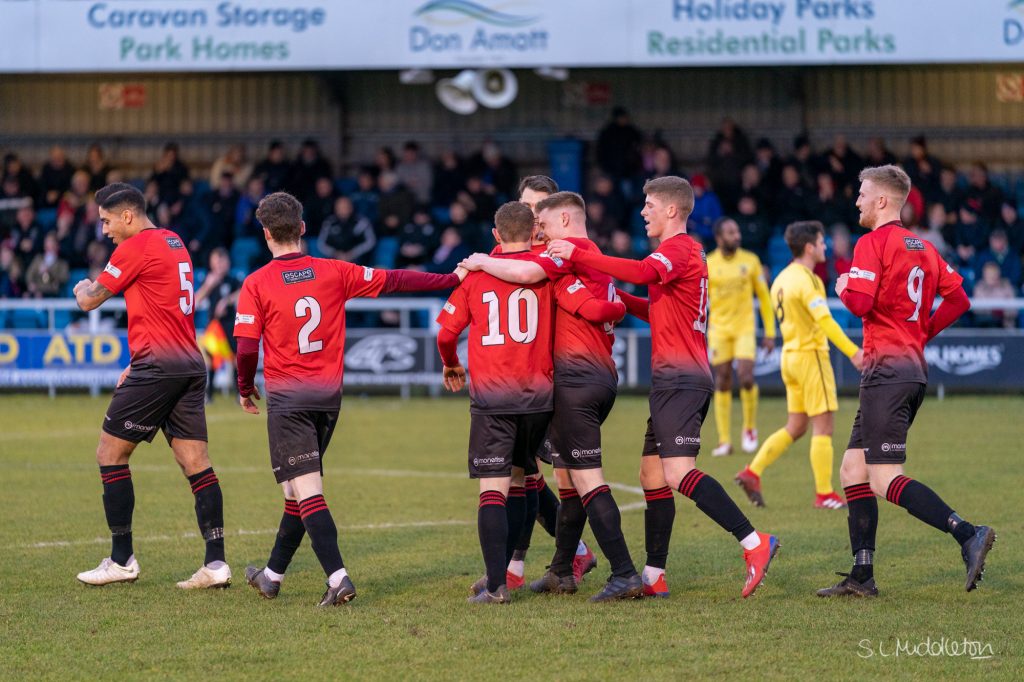 IT ALL STARTED SO WELL…

Back in August and full of optimism the 2019/20 Northern Premier League season kicked off with a home win against Stalybridge Celtic thanks to a Jack Storer penalty.

Although there were 1-0 defeats at both Witton Albion and Warrington Town, the home form was good with Mason Warren’s penalty securing a second win at the expense of Stafford Rangers, before a thrilling 4-2 win at home to Buxton had two more penalty successes for Warren and two goals for Declan Bacon on loan from Alfreton Town.

Sports took their first away point with a 1-1 draw at Grantham but then came the first home defeat at the hands of Ashton United.

Sports completed a five game unbeaten run with a win and a draw at home with Scarborough Athletic and Morpeth Town, with Hughes and Warren again the scorers.

But four successive defeats at Matlock, then at home to Lancaster, Witton and Radcliffe put them on the back foot.

Beavon scored his third league goal in a 1-0 win at Buxton at the end of November, but as December arrived so did the beginning of the wet and soggy times to follow.

There were disappointing away defeats at Bamber Bridge, Scarborough and Stalybridge to see off 2019, with the notable absence of any home games.

The New Year had gone well though initially, Paddy Webb scoring on his debut for a 1-0 win at Buxton, and three days later a rare home game brought a 2-1 win over Nantwich Town with Beavon netting both.

It was off to visit table toppers South Shields next and for much of the game Sports held their own with goals from Andy Wright and Webb again.

The biggest win of the year then followed with a 4-1 home win against Grantham. Karel Tvaroh and Ryan Nesbitt joined Wright and Beavon on the score sheet.

Although it wasn’t a win at FC United, it was one of Sports best performances of the season. They went ahead on three occasions but United kept coming back to finally settle on 3-3 with Webb hitting two and Beavon the other scorer.

After a string of postponement’s it was back home for the visit of Whitby Town. The gale force winds played havoc with Sports game plan and they came away as 3-1 losers and didn’t get to play again for over three weeks.

It was then a return match at Whitby and 1-1 with Aman Verma’s strike, before United FC came to the Don Amott Arena for what turned out to be the last home game of the season.

United were a class apart and Sports were inflicted with a 4-1 defeat, but worse was to come for their final match before the Corona Virus brought everything to a halt.

Sports were well on top at Ashton with a first half goal from Webb, but just before half time the referee was injured and replaced by one of his assistants.

Two penalties followed for Ashton and both Remy Agustien and Warren were red carded, in one of the most appalling displays of officialdom ever seen on a football pitch.

For a while Sports had hovered just outside the play-offs, but as the waterlogged pitches intervened, the games in hand caused an ever increasing backlog, before the whole season came to an abrupt and disappointing conclusion.

In the FA Cup it was a first qualifying round exit away to Stafford, after seeing offer Coventry Sphinx 3-0 at home in the Preliminaries.

It was 3-0 defeat at Basford that ended their FA Trophy hopes, while the Derbyshire Senior Cup Challenge ended when Long Eaton United visited and went home 4-2 winners.

There was a home win in the first round of the Integro Cup 3-2 against Loughborough Dynamo, but after the first attempt was postponed, Buxton were the visitors and Sports went down 3-2.

The league is due to start again in August for the 2020/21 season, by which time Sports were due to be playing on a brand new 3G pitch. Decisions on both are now eagerly awaited.