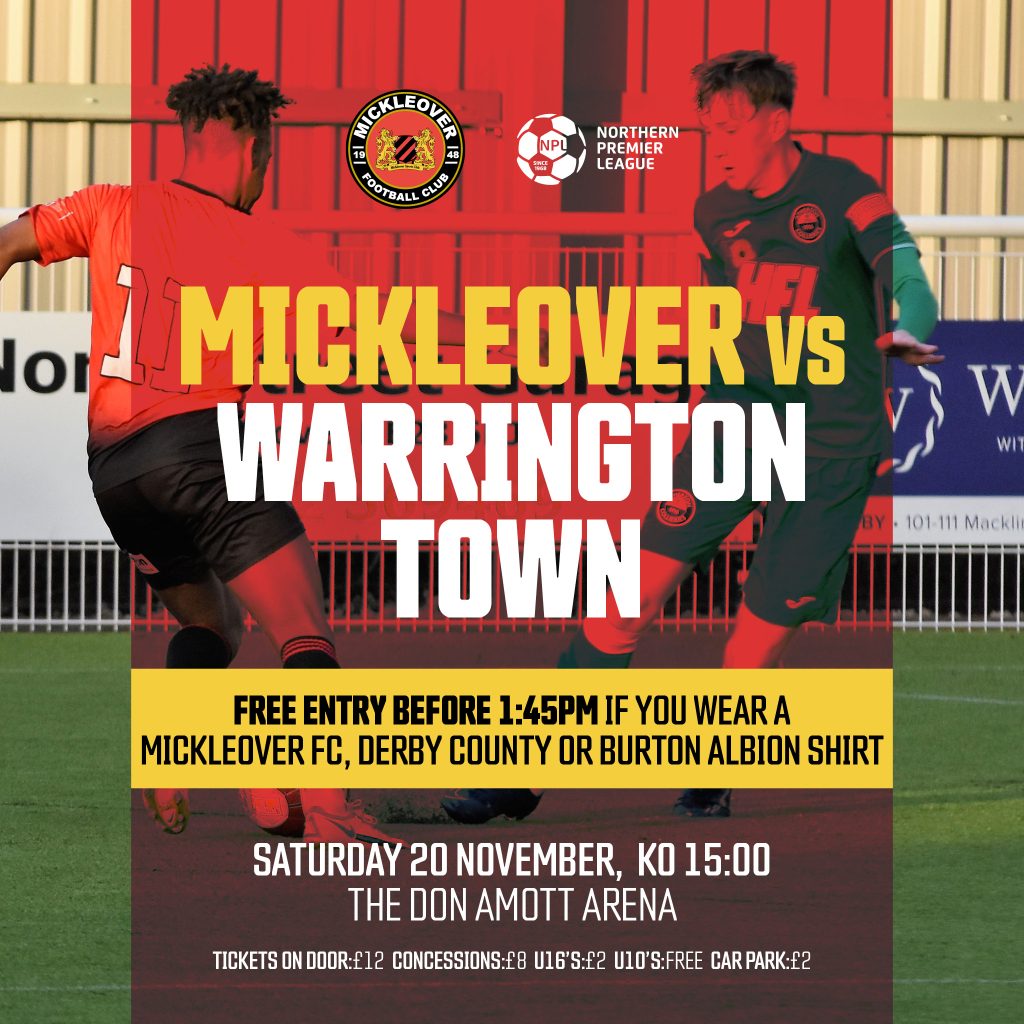 This Saturday Mickleover FC have a tough home game, with Warrington Town the visitors.

Currently sixth in the NPL, Warrington have won nine of their 17 games so far, including wins on the road at Ashton, Lancaster, Stafford and Grantham.

Following last Saturday’s victory over Atherton, Mickleover are back up to 18th in the table, but with teams around them having games in hand, points particularly at home are critical to escape the drop zone.

Warrington are captained by 6ft+ defender Mark Roberts, who started his career at Crewe Alexandra. He made seven first team appearances at Gresty Road and also had loans at Leek, Vauxhall Motors, Southport, Chester and Halifax, before joining Northwich after another initial loan.

In 2007 he joined league two Accrington Stanley and played 37 games before moving on again. After a brief return to Northwich, he was back to the Football League action with Stevenage, Fleetwood, Cambridge Utd and Forest Green Rovers, making almost 350 appearances and is now in his fourth season at Warrington.

Goalkeeper Daniel Atherton was signed during the summer. A former Liverpool junior, he also had a spell on loan at Marine last year and spent some time at Warrington last year too, before a brief foray in the US.

James Baillie is a right back and another former Crewe Junior. He had a loan at Nantwich before being released, from where he moved onto Curzon Ashton. He joined Warrington in September last year.

Central midfielder Jay Harris was a summer signing. Starting out at Everton, he had a couple of seasons at Accrington, before moving onto Chester City. He then spent five years at Wrexham, scoring 20 goals in over 200 appearances.

He was with Tranmere Rovers when they regained their league status and then had a season at Macclesfield before rejoining Wrexham in January 2020.

Mitch Duggan is a defensive midfielder. A Tranmere Junior he had loans at Marine and Warrington, before joining our visitors permanently in July 2018. He has been out on loan at Flint and Southport, but is now back at Warrington and part of their first team squad.

Left back Eddie Clarke is another former Tranmere junior, but is currently on the injured list. He joined Fleetwood in July 2018, and after loans at Macclesfield and Stockport, was released to join Warrington in November last year. Like Duggan he also had a loan spell at Flint earlier this year too.

Winger Jack Mackreth came from Bala Town in the summer. He is yet another former Tranmere junior. He had a brief spell at Hyde, before longer spells at Barrow, Macclesfield and Grimsby. Then return trips to Tranmere and Macclesfield followed, with a short stay at Bury and he spent most 0f 2017/18 at Wrexham, before coming to Warrington in 2018. He went to Bala in February and was back at Warrington to start this season.

Striker Jordan Buckley was another one of a number of Warrington players who spent the early months of this year in Welsh football. Previously at Irlam, he signed from FC United in January 2020, and then went to Flint in February before heading back to Warrington in July.

Bohan Dixon is a midfielder who started out in the Welsh League with Connah’s Quay. He quickly moved on to Buckley Town, before dropping back into local football in Liverpool.

He was then signed by Hednesford Town in August 2011, moving to Burscough before dropping back to local league level. But a year later he was spotted by Accrington and his career was on the rise again.

After a loan at Marine he joined Lincoln City, but quickly moved on via Northwich, Salford City, Stalybridge Celtic, AFC Fylde, Halifax, Stockport and Ashton, before finally arriving at Warrington in September 2018.

Striker Dom Reid is a returnee, after played for Warrington a couple of seasons ago. An ex Rochdale youth player, he has also played for Bootle, AFC Fylde, Prescot Cables and Marine before coming to Warrington in 2018. He then moved to City of Liverpool and made his return pre-season.

Josh Amis is yet another Warrington player who had a spell in the Welsh League with Flint, before returning in the summer. Originally a Preston junior, he had loans at Stockport and Northwich, before the latter became permanent.

The young striker then returned to Stockport and after spells at Altrincham and Marine signed initially for Warrington in July 2018.

Midfielder Ben Hough was picked up from Oldham Athletic in the summer, after signed for Latics as a 10 year old from Runcorn Linnets.

Matty Regan is an ex England under 16, 17 and 18 international who started out at Liverpool’s Academy. He then joined Nottingham Forest, before going to Tamworth on his release.

The centre back had more loans at Hednesford and Worcester City, before joining Stalybridge in 2014. Further moves to Colwyn Bay, Curzon Ashton and Farsley Celtic, preceded his arrival at Warrington. He is however, currently out injured.

Spanish midfielder Stefan Mols had only just been signed, having been released by Blackburn Rovers in July.

Luke Duffy is another attacking midfielder, who was signed in September 2020 from Lower Breck FC, he has also been part of Salford City’s development side.

Matt Grivosti was another young striker found in local football, before being signed up pre-season.

Kick off at the Don Amott Arena will be 3pm as usual, the bar will be open and the forecast is dry but overcast.