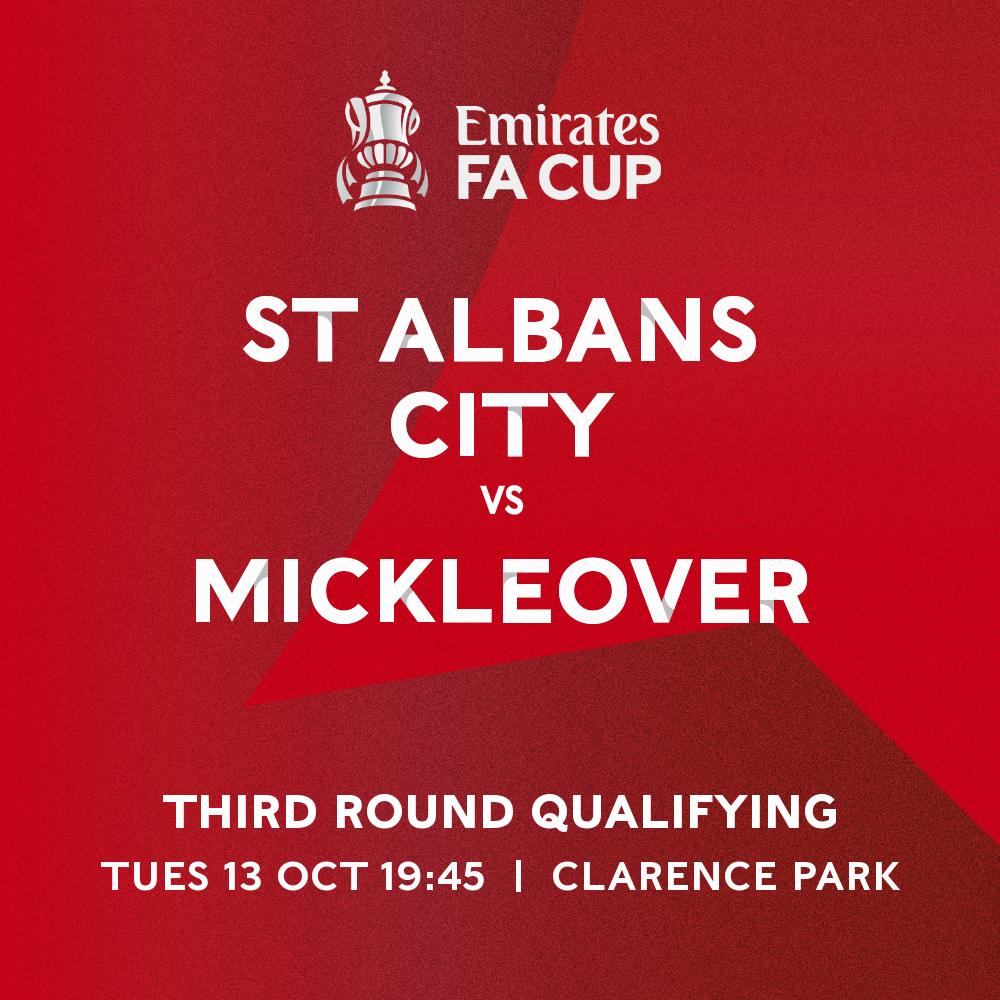 On Tuesday evening John McGrath and his team will be hoping to make history, after they take on National League South team St Albans City in the Third Qualifying round of the FA Cup.

If Sports are successful in their visit to Clarence Park, it will put them into the hat for the Fourth Qualifying round, for the first time in the clubs history.

St Albans have only had three competitive this season, after a string of friendlies. They beat Hampton & Richmond Borough in the League 1-0 and knocked out Hitchin Town in the previous FA Cup round 5-0 at home, before a 1-1 draw with Concord Rangers in the League last Saturday.

In charge since February 2016 manager Ian Allinson played over 300 league games as a player for Colchester United in two spells, and played over 100 games in all competitions for Arsenal. He was also at Stoke City and Luton Town.

During his managerial career, he has managed a number of non-league teams, including Baldock Town, Barton Rovers twice, Harlow Town, Stotfold twice and Boreham Wood twice too, including promotion to the National League in 2014/2015.

Goalkeeper Michael Johnson made 184 appearances for Hitchin Town before signing for Braintree Town at the start of the 2019/2020 campaign. He joined the Canaries from Stotfold in 2014 and signed for the Saints in July 2020.

Defender Devante Stanley previously played for the club during the 2019/2020 pre-season but was unfortunately injured in a friendly at Biggleswade Town.

He came through the Luton Town youth system before becoming a key player at Bedford Town, St Neots Town and Royston prior to joining Biggleswade.

James Kaloczi made his first-team debut in December 2012 during a county cup win over Watford and settled as a midfield player.

Has played for the City Youth and Reserve teams last season and was previously with Harvesters (St Albans) and Boreham Wood Youth.

Having left the Saints in the summer of 2015 to join Dunstable Town as a centre-back, he quickly settled and soon became captain. In March 2016, he re-joined the Saints on dual-registration, and has been back at the Saints since March 2019.

Joy Mukena started his career with Tottenham Hotspur, before moving to Watford in 2017, where he turned professional. The young defender was named on the bench for the senior team’s 4–1 win over Chelsea on 5 February 2018, but was ultimately an unused sub. After his release from Watford in 2019 and signed for Bracknell Town and became a Saints player in August 2020.

In his second spell at the club defender Michael Clark originally joined the Saints from Concord Rangers in December of 2018, making 22 appearances throughout the rest of the season. He left the Saints to re-join Braintree Town for a second spell in August of this year before coming back to the Saints fold in December 2019.

Thomas Joseph “Tom” Bender graduated from Colchester United’s Academy and spent 4 years there before moving to Millwall. He then moved on to Dartford FC for the 2014/2015 season (following a loan spell at Welling United) and Forest Green Rovers, making 10 appearances, before joining the Saints on loan in November 2015.  He came back to the Saints during the 2017/2018 season.

Michael Oluwadara Dada (“Dara Dada”) is a central midfielder who joined Staines Town in June 2019, having previously played for Chalfont St Peter, Hertford Town and Berkhamsted. He signed for the Saints in August 2020 following a spell at Isthmian League South Central side Barking FC.

Originated from French-speaking Senegal in West Africa.  Dave Diedhiou ( pronounced “Deejoo”) joined Hendon in 2008, developing into an integral piece of the side that suffered play-off final heartbreak against Dulwich Hamlet at the end of the 2017/2018 season.

The midfielder made almost four hundred appearances during his time with the North London club, scoring 43 goals in the process, before singing for Saints in June 2018.

Creative midfielder David Noble and club captain joined the club in August 2016 as a free agent having been released by Exeter City that summer, with over 300 football league appearances to his name, bringing an abundance of experience and quality to the side.

He began his career began as a trainee at Arsenal winning the FA Youth Cup in 2000 in a man of the match performance. A brief spell at West Ham United and Boston United followed before he moved to Bristol City for £80,000 in January 2006 after enjoying a successful loan spell there.

On 13 February 2007, he scored against Middlesbrough in the FA Cup Fourth Round Replay. But his most important strikes were the two goals he scored against Rotherham on 5 May 2007 which took Bristol City back into the Championship. Noble also scored in the Championship play-off semi-final against Crystal Palace, when his stoppage-time strike from 30 yards gave Bristol City the advantage going into the second leg.

Following his exploits at Ashton Gate he continued his journey west, joining Yeovil Town on loan in March 2009 before he signed for League One side Exeter City in the following January but was released after the Grecians were relegated in 2012.

He spent two years at Rotherham United before returning to his former club Exeter City in January 2015, having previously made 12 appearances for the Grecians  on-loan with the club for the first half of the 2014-15 season. His contract at St James Park expired in the summer of 2016 making him a free agent.

Kyran Wiltshire joined the Saints in June 2020. The former MK Dons midfielder was ever-present in the Oxford City side in the previous season, with 34 appearances for the Hoops.

He previously experienced success at this level as part of the title-winning Maidenhead United side in 2017.

Munashe Sundire is a versatile and energetic player who can play either full-back or midfield. He has played for Hemel Hempstead Town, Kempston Rovers, Kettering Town and St Ives Town.

Romeo Akinola is an attacking midfielder and was previously part of the Haringey Borough team that made a blistering start to life in the Isthmian Premier 2019/2020 campaign.

He started with five years in the QPR youth teams, thriving under the watchful eye of former City striker Paul Furlong, before going abroad with IFK Ostersund in the Swedish fourth division as part of the highly-regarded ‘League Football Education programme’.

Solomon Nwabuokei is a utility player who signed for the Saints after an impressive season at Biggleswade, which won him the young player of the year award.

Mitchell Weiss played at Kings Langley and Hemel Hempstead Town before joining Saints in August 2020. The forward was an integral part of the King’s Langley squad, scoring 41 goals in all competitions.

Having signed for Saints during the summer Shaun Jeffers had come through the youth ranks of Coventry City, before lining-up for a number of Football League sides including Peterborough United, Newport County and Yeovil Town prior to joining Chelmsford City in the summer of 2016. He helped fire the Clarets to the play-offs with 21 goals in 39 games.

His goal scoring exploits helped earn him a transfer to Hertfordshire neighbours Boreham Wood where he made over twenty-appearances in the National League during the 2017-18 campaign. He went on to play forHampton & Richmond Borough on loan, where he notched 6 in 13, and Brackley Town.

He made his mark again after rejoining Chelmsford, with fourteen goals in thirty-two games, including an effort against the St Albans at Clarence Park in November 2019.

Zane Banton completes their line-up, an exciting winger who made four first-team appearances for Luton Town during the 2016/2017 season.

He moved to Clarence Park in March 2017, his third loan in non-league football, having spent time at Evo-Stik League Southern Premier side Biggleswade Town and Hemel Hempstead Town.

He was recalled by Luton prior to the Saints final game of the 2016/2017 season, then released by Luton at the end of their season, before signing a permanent deal for the Saints in June 2017.

Unfortunately the game is behind closed doors, but is due to feature on livestream.