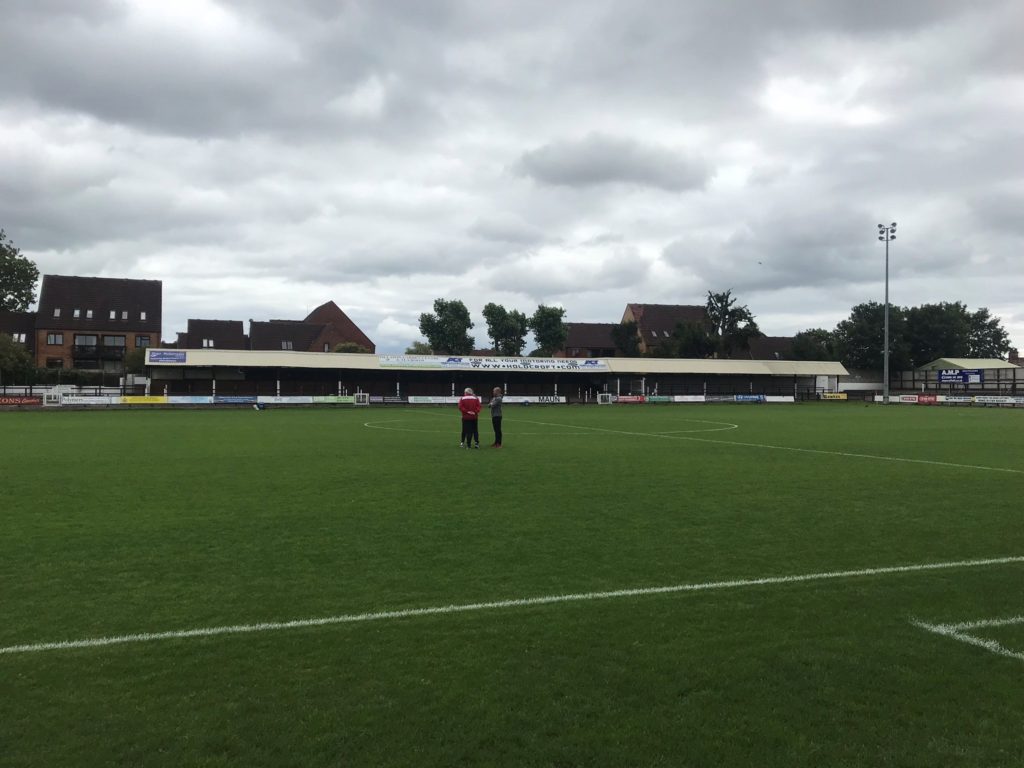 Fans at the Marston Road stadium were treated to a real battle as Stafford Rangers and Sports ground out a 1-1 draw in a very competitive and match which saw Kevin Grocott sent off for what looked like a harsh decision by the referee. A goal from Kyle Perry gave Rangers a half time advantage which also saw Niall Doran stretchered off after a nasty looking coming together. Sports got themselves back into the game with a heavily deflected John McGrath free kick. As Sports looked more likely to go and grab a winner Grocott was sent off which left Sports hanging on for the point but that is what they did to round off the first month of the season with four points from four games.

A number of players were missing due to injury and illness for McGrath today so a shakeup in the lineup took place. Lewis King remained in goal with a back four of Kevin Grocott, Pablo Mills, Ben Turner and Mason Warren. The midfield five was made up of John McGrath and Curtis Burrows holding. This left Niall Doran, Jimmy Philips and Oli Roberts supporting lone striker Evan Garnett up front.

Sports had the first chance of the game as Garnett forced a save from Adam Whitehouse, who went down with a suspected broken wrist but all was ok as the Rangers keeper was able to play on. Sports had another good chance as Roberts put a free kick just over the bar. But it was Rangers who took the lead as a cross into the box was met in a crowd of players by Kyle Perry who headed into the goal. Lewis King protested that he was fouled in the mix up and the referee didn’t like this as he was booked for decent.

A few minutes later Joe Cuff put an effort wide for Rangers. Sports midfielder Niall Doran had to be stretchered off the field after is foot got caught in the grass ad as the challenge came in it was clear that Doran was in some discomfort and was removed from the pitch with the help of the stand by medical team who to be fair did good job in getting him off carefully but quickly. He was replaced by young midfielder Lewis Belgrave for his first taste of first team action this season. Rangers would have one more effort before the break though as Harry Benns fired an effort over the bar from a Bailey-Jones cross.

The second half started a lot better for Sports as Roberts caused problems weaving in and out of the defenders but his effort was comfortably saved by Whitehouse. It was Roberts again next, this time from a free kick once more which was again well saved by the Rangers keeper. Jimmy Phillips then had a shot dragged wide from a rebounded McGrath free kick before Sports finally got an equalizer just before the hour mark. A McGrath free kick on the far side of the field at the by-line took a wicked deflection off a Rangers defender and kicked in off both the bar and post to get Sports back on level terms.

Belgrave, Garnett and Phillips all had good chances to grab a winner for Sports as they pressed the hosts to snatch the three points. But just after Bailey-Jones had a strike smashed over the bar, those chances of grabbing all three points seemed to disappear as a challenge from Grocott just outside the box was deemed to be violent conduct by the referee as he brandished a red card. The match official after the game admitted he may have got it wrong as McGrath confirmed the club will be appealing. Stafford Rangers officials also agreed it was not a red but the decision at the time meant Grocott was off and Sports were down to 10 men.

Rangers smelt blood and went for the kill to grab the win themselves but to Sports credit they restricted the hosts to only one effort. First Karry Benns missed a header which everyone thought was in but was narrowly wide before the final chance. But it was Sports who had the final effort as a mistake by the Rangers keeper left Oli Roberts with an open net from 25 yards out but to the hosts credit they got back very quickly to block the lobbed shot and away from any dangers. So another point for Sports sees them end August with a good start to the season with one win, two draws and only one defeat and are 14th in the league standings. Sports will now begin September with a home game with Derbyshire rivals Buxton FC on Saturday 1st September with a 3pm kick off.