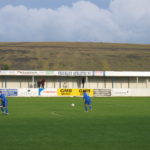 Two from Dales and one each from Baskerville and Norcross completed a comprehensive win for Sports at Westfield Lane in South Emsall, Yorkshire; spoiled only by a late injury to penalty hero Lewis King. Man of the match Andy Dales was in great form.

Sports started well and Jack Broadhead hit a stinging shot that Sebastian Malkowski could only parry into the path of Adam Baskerville but his shot was just wide. Dales then played a one two with Baskerville and his 15 yard shot just cleared the far post. A minute later he repeated a one two with Danny Schofield but Malkowski saved well.

Frickley tried to hit back and Joel Purkiss saw his shot blocked by Lewis King and then fired the rebound over the bar. Bailey Gooda then tried his luck from 30 yards; the shot clipping the top of the bar.

Sports took a 21st minute lead when Dales dribbled to the goal line and pulled the ball back for BASKERVILLE to score with a low drive. Then the floodgate opened. DALES went close after he played a one-two with Schofield and saw his fierce shot hit the underside of the bar but he was not to be denied for long as on 35 minutes he yet again broke through the defence to find the bottom corner from 15 yards out. Sports quick fire passing moves were proving too much for the home team and DALES scored a third with a fine shot from 18 yards on 37 minutes.

Frickley were being outplayed but got a chance to pull one back from the penalty spot after a fierce shot hit Tom Burgin on the arm. Lewis King made a great save diving to his right and was up quickly to block the follow up shot.

Sports started the second half well and Jack Broadhead hit a 25 yard shot that whistled just past the far post. As if things couldn’t get worse for Frickley, they were then reduced to 10 men as Simon Lenighan was shown a second yellow card for a foul on Dales. Tom Burgin was then denied a first goal for the club when his close range shot was saved by Malkowski.

Perhaps with a view to the Bank Holiday Monday match, in the last half hour Sports sent on all three substitutes in Minott, Norcross and Lansdowne. It did not alter the way the game was going as William Norcross opened his account with a good piece of skill and a fine finish after 85 minutes. The only downside to the day was what looked like a serious injury to Lewis King in the 88th minute.