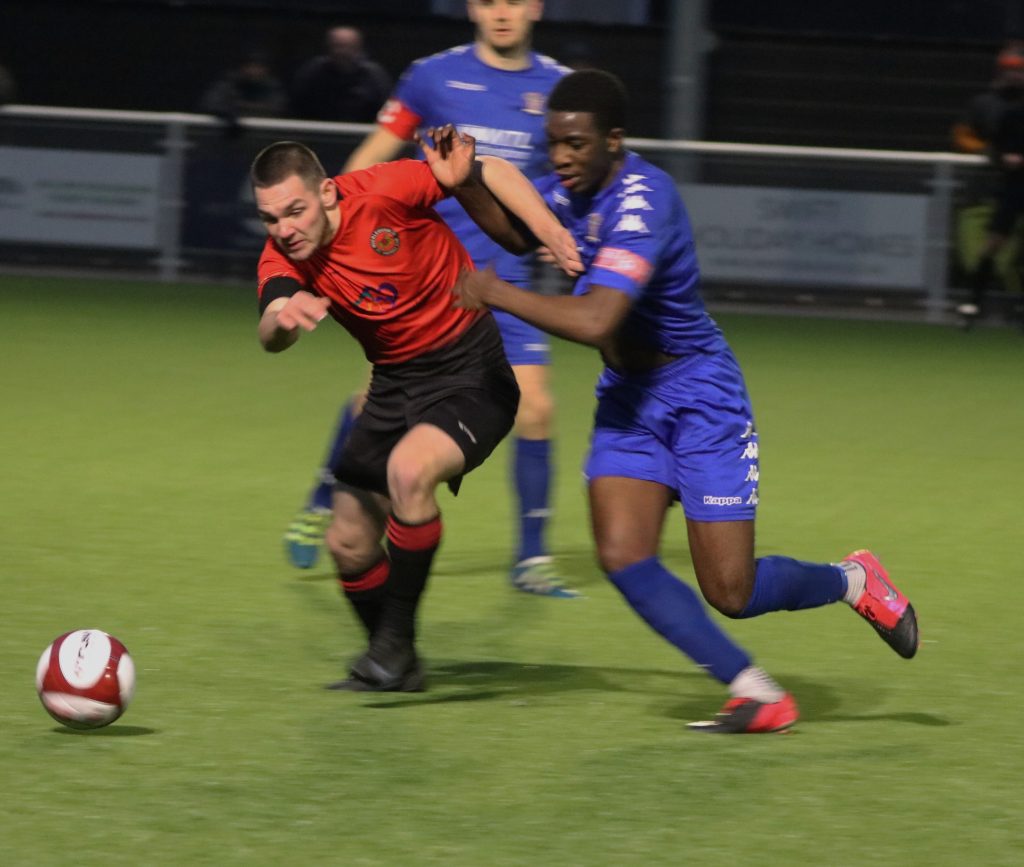 Mickleover made it two wins in succession, but it was a tough duel with fellow strugglers Witton Albion.

Without a game since their New Years Day win at Hyde, Mickleover started much the stronger of the two teams.

After only a couple of minutes a Warren free kick showed promise, before eventually trickling through a busy area to Witton keeper Hall.

It was Warren again on the end of a curling shot three minutes later, but it was safely into Hall’s hands again.

Playing on the right of midfield, Radcliffe had been finding plenty of space and sent a challenging cross in for Beavon, whose shot was tipped away by a diving Hall to his right, 10 minutes in. 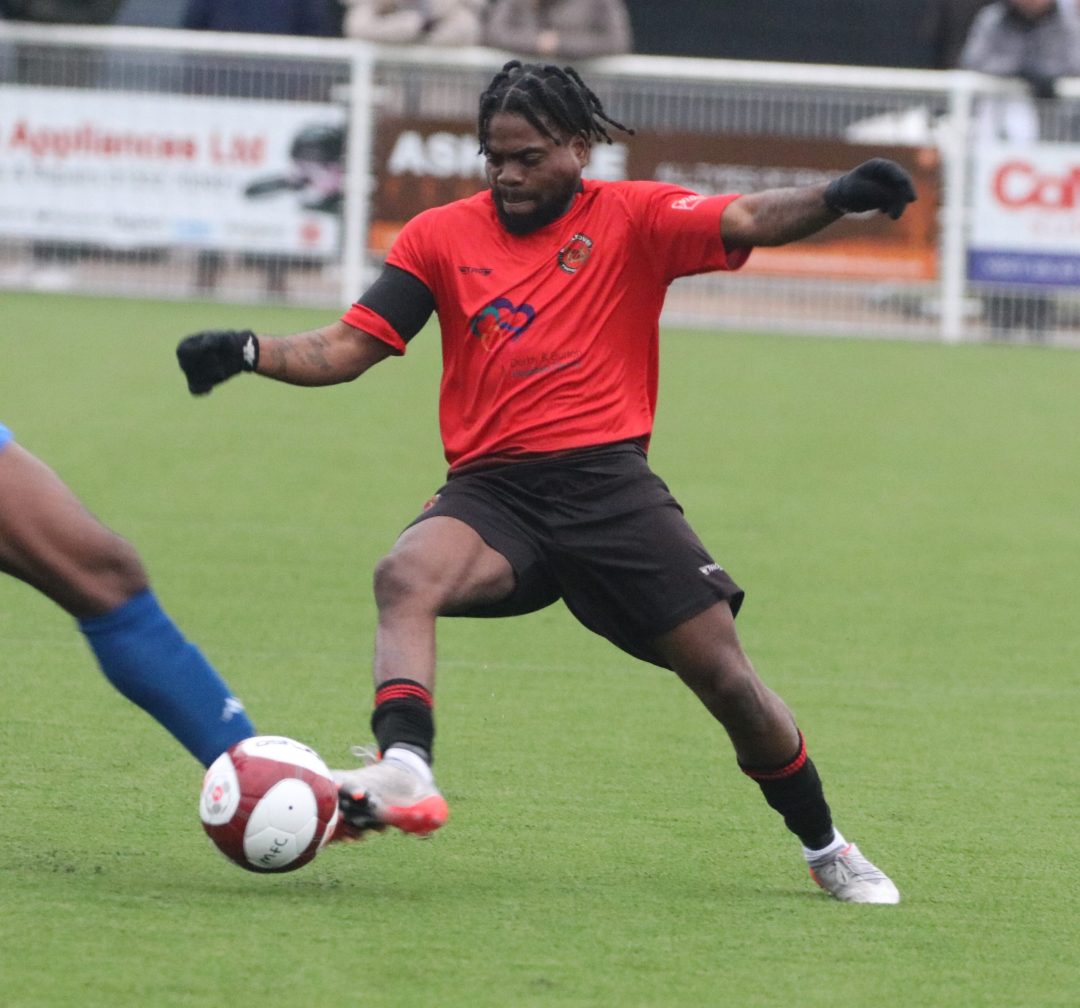 Witton had hardly been into the Mickleover half, but two minutes later they had their first chance, blocked for a corner after Mickleover had failed to clear their lines.

McDonald’s pace was a concern for the visitors and he managed to put Dales through after 13 minutes, but his effort was wide of the left hand post.

Another McDonald run resulted in a free kick after he was fouled as he collected a ball from the right. He took the free kick himself but fired wide.

Both Dolan and Bateman had caused problems for the visitors defence on the overlap, and after 20 minutes Dolan’s cross just missed from connecting with Dales.

Two minutes later however McDonald picked up the ball just outside the box and fired past Hall 1-0. Only two minutes later McDonald was through again, finding Beavon as he squared it, but the final shot was easily taken by the keeper again.

Witton wasted a 24th minute free kick, before Dales picked up a loose ball before charging towards the Witton goal, only to be fouled in full flight.

Beavon got his head to Dales free kick, but the effort was just wide again.

In the last 15 minutes of the second half Witton began to get into the game more, aided by Mickleover’s willingness to sit back in their own half and try to absorb the pressure.

The visitors had a shot wide after 37 minutes, but Mickleover still had chances too with Dolan’s challenging run and following cross just too high as a deflection took it out of Beavon’s reach for a corner. 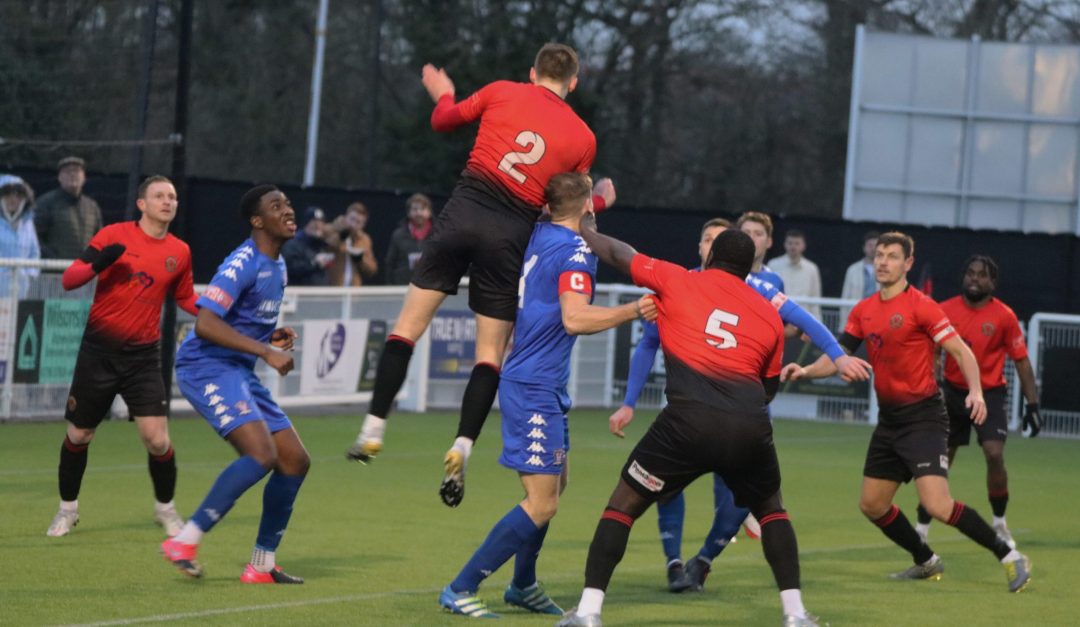 Warren was given a yellow card just before half time. Once again Witton wasted their free kick, before Dales broke clear again. He was fouled again but the referee didn’t give it.

There was one more chance before the half time whistle, when some good play from Beavon found Bateman, whose cross managed to find Dales’ head, but the effort lacked pace and failed to trouble the keeper, so it remained 1-0.

Both sides remained unchanged as the second half got underway, and unfortunately there was little sign of the early flourish from Mickleover that faded during the first 45.

Witton were straight on the attack as they sought the equaliser, with a shot from Ferguson on the right just fractionally wide of the left hand post.

But it was almost a second for Mickleover when McDonald smashed a shot against the bar after 50 minutes. Beavon put the rebound in, but it was disallowed for an alleged offside.

Watt and Mills had managed to thwart the Witton attacks so far, but as the midfield began to make less and less progress, they came under pressure too. 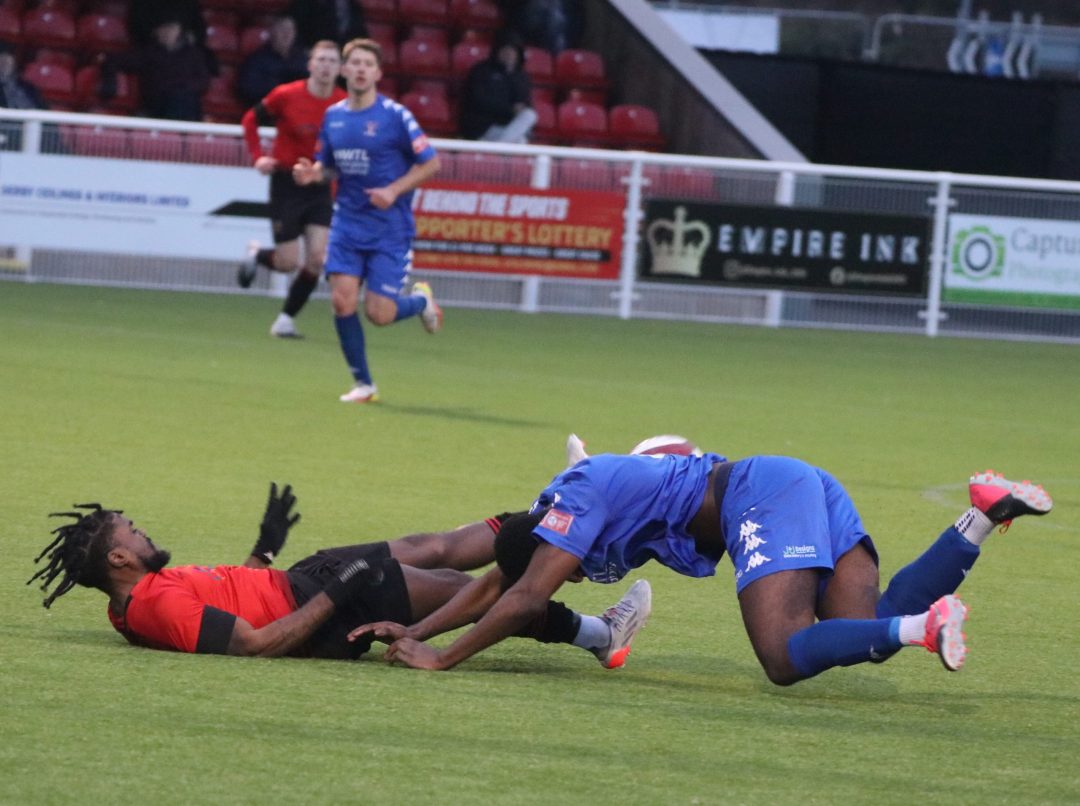 But Mickleover went close again when Bateman’s header from a free kick was tipped over by Hall after 52 minutes.

Dales then connected with a weak effort at the end of a long build up, before another close call for the Witton defence after 55 minutes, when McDonald went close following up a corner.

There were chances at both ends and Witton had two in a five minutes spell, but the inevitable finally happened in the 64th minute.

A cross from left found Rob Hopley in the box, where his strikers had failed, he slotted home to make it 1-1.

There still seemed to be more fight from Witton, but after a hand ball Warren’s kick was on target but failed to trouble Hall.

Watt blocked a powerful Witton strike after 71 minutes and shortly afterwards Warren was replaced by Wright.

It was fairly even for the next 10 minutes, with a Bateman cross finding both Beavon and Wright trying to get a shot in.

Dolan then found McDonald’s head with a cross from the left, but it was just wide after 76 minutes. But only two minutes later it was McDonald’s turn to set up Beavon, but the golden chance went begging and his shot was wide.

Time was beginning to run out and two of the crucial three points were looking lost.

McDonald managed to head a Bateman cross just wide again and Dales shot from outside the box after a Dolan cross, was blocked.

With five minutes left on the clock Niven came on for his debut replacing McDonald and attempting to turn for his first shot was pushed to the ground. Penalty appeals failed, but two minutes later he completed a dream debut by firing a shot hard and low passed Hall for 2-1.

Butler came on for Beavon for the last couple of minutes and Witton failed in two consecutive penalty appeals, so it remained 2-1 and Mickleover took all three points, but only just!