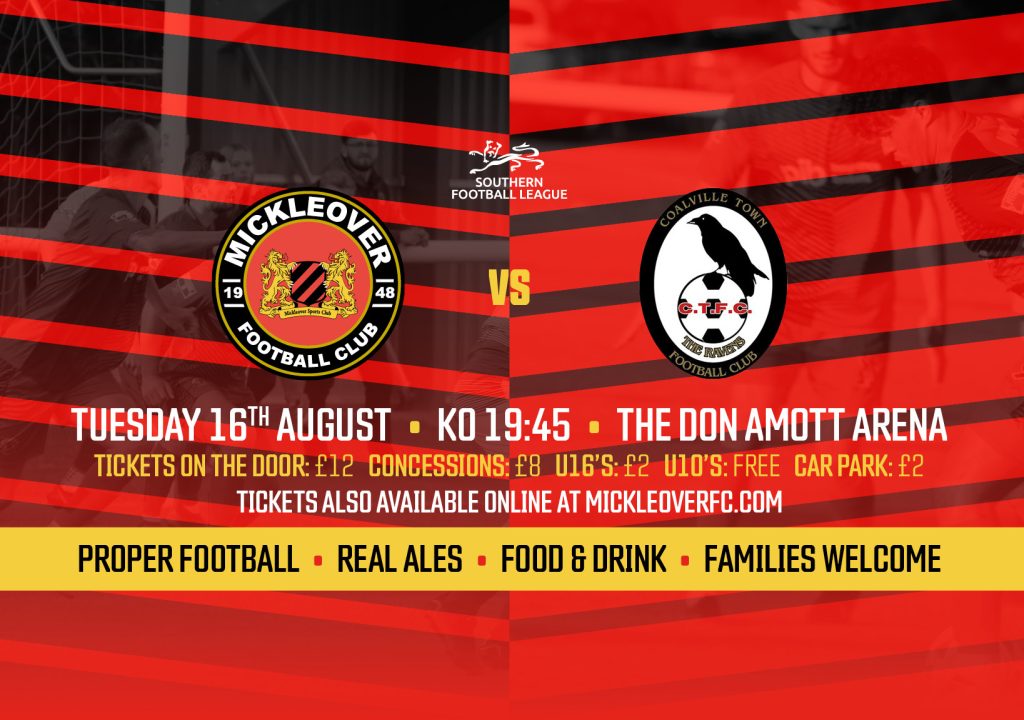 Tomorrow night we host table toppers Coalville Town at the Don Amott Arena, whhave have made it two wins out of two after last Saturdya’s 4-1 win over Alvechurch.

Manager Adam Stevens had some new signings making their league debuts against Rushall on the opening day of the season too. Keeper Paul White came from Peterborough Sports last month, having started out with Cork City in his native Ireland.

Striker Ashley Chambers was the fourth debutant against Rushall. He was a Leicester City youth player, with over 200 league appearances under his belt, with the likes of Wycombe, Grimsby, York, Cambridge Utd, Dagenham & Redbridge, before non league spells at Nuneaton, Kidderminster and Brackley. He came to Coalville after a year at Buxton and was on the scoresheet against Alvechurch.

Midfielder George Wilson arrived in July too. A former Blackburn junior, he played for Loughborough University after his release and had a spell in Sweden with Ljungskile SK before arriving at Coalville. He hasn’t made s start for the club yet.

Midfield partner Tom McGlinchey can go one better, as he arrived from Leicester Road five years ago. He also scored last Saturday.

Defender Elliott Putman came in from Barwell last September.  He started out at Leicester City and has also played for Stamford and Oadby.

Luke Shaw is another midfielder who favours the wing. He was signed from Grantham in 2018 and scored 12 goals last season and hit two against Alvechurch.

The oldest player in the squad at 37 is midfielder Steve Towers, now starting his sixth year with the club since singing from Brackley. He started at Corby and has played for Rothwell, Stamford and Grantham too.

Striker Ronnie Morley is a product od Coalville’s own youth programme and has also had a loan spell at Anstey Nomad’s. He made his league debut with two appearances last season.

Sports hope to have a full squad to choose from as we seek our first win of the year, having had the same starting line-up for both games so far.