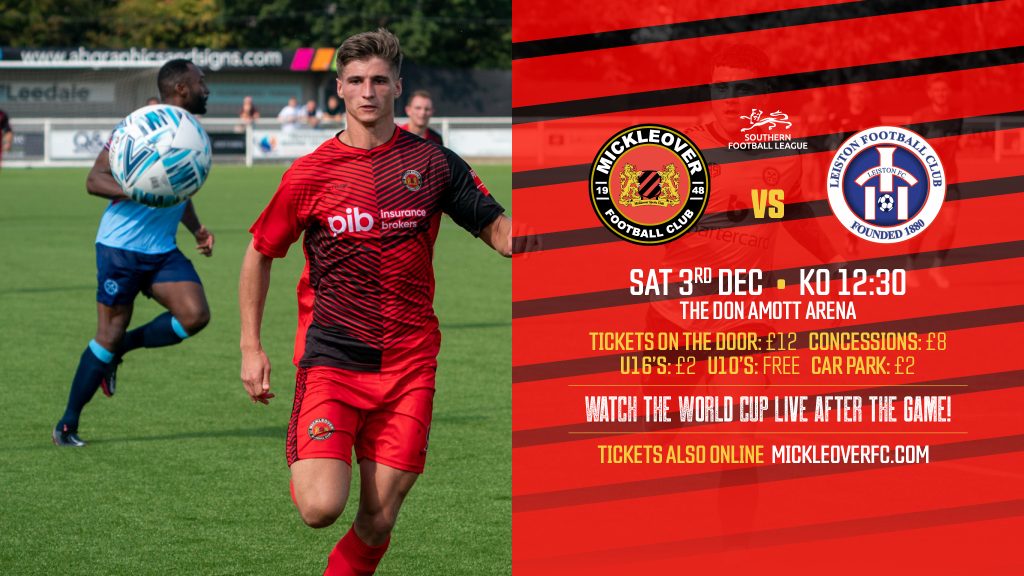 Looking to get back to winning ways after two defeats on the road, Mickleover host title contenders Leiston on Saturday afternoon.

Currently second in the table, one point from top and with two games in hand, Darren Eadie and Chris Wigger’s side beat Sports 1-3 back in August.

They lost at home to Kings Langley on August 29th and at Basford two days previous, but have been undefeated ever since, having beat Redditch 2-1 at home last Saturday.

Mickleover’s defence will have to tighten up considerably too, having conceded 11 goals in the last three matches, with the visitors strike force the most successful in the league.

Joint Manager Eadie is a former Norwich City, Leicester City and England Under 21 midfielder and has been in joint charge with Wigger since March 2020.

Goalkeeper Sam Donkin was signed from Biggleswade in November 2019, having previously played for Whitehawk and Stamford. He has recently made his 100th appearance for our visitors.

Full back Wyatt Hill was a pre-season arrival, having come from Wroxham in June following a spell in US College football.

Captain and left back Seb Dunbar came from Stowmarket in July 2021. He was an Ipswich Town Junior and also played for Maldon/Tiptree, Bishop Stortford and Bury Town. It’s his third spell at Leiston.

Centre back Adam Bailey-Dennis has 12 years experience under his belt. He started at Aveley, before moving to Bury Town. His path then took him via  Bromley, Bishop Stortford, Hemel and Chelmsford, before joining our visitors in October 2020.

Fellow centre back Jake Hutchings has travelled far and wide since starting out at as a junior with Leyton and Torquay.

Grays, Weymouth and Frome preceded a spell at Hearts, returning south of the border with Enfield. He then moved on again before arriving at Leiston for his first spell in 2016. He left after a year but came back in December 2019, from Braintree and finally came back again for the third time from Kingstonian in May 2021.

Midfielder Rossi Jarvis was capped at under 18 and under 19 by England and was a Norwich City junior. He was loaned to Torquay and Rotherham, before joining Luton Town on his release and netted almost 100 appearances as a league player.

Brother Ryan has England caps as an under 16, 17 and 19. He started at Norwich City too and was loaned to Colchester, Leyton Orient, Kilmarnock and Notts County, before joining Orient on his release.

After many more moves he settled back in East Anglia with Lowestoft in 2015. Then after a move to Kings Lynn he returned to Lowestoft, from where Leiston signed him in July. He played in every division of the football league and the Scottish Premier, with well over 300 appearances.

Another former Norwich junior is midfielder George Quantrill. He arrived at Leiston in May 2021, after spells at Dereham and Stowmarket.

Another midfielder and another former Norwich junior, Zach Dronfield came from Hampton & Richmond in July. He had previously been at Wealdstone.

Fellow midfielder Finley Barnes has followed a similar path too, but he came straight to Leiston in July 2020 on his release from Norwich.

Striker Will Davies is a prolific goal scorer, having arrived at Leiston in 2018. He has played well over 100 games since his arrival, scoring 50 goals, 19 of which were last season! He has already scored 12 goals this season and is the leagues second highest scorer.

Joe Marsden is mainly an attacking midfielder who is in his second season with our visitors, since arriving from Needham Market. He was previously at Lowestoft Town and came back to Leiston in June last year after three years away, recently making his 100th club appearance.

Another midfielder, Adam Mills was signed in July last year from Needham Market. He has also played for Maldon/Tiptree and Sudbury Town.

Left back Ollie Saunders came from Braintree in November 2019. He started as a Norwich junior too, before moving on to Grimsby Town.

Just for a change midfielder Nya Mesuria started out at Ipswich Town. He was released in July last year and came to Leiston in December, after a short spell at Billericay.

Another former Norwich youngster, striker Jamie Eaton-Collins came from Sudbury in July 2020 and has played for Concord Rangers too.

Oliver Godbold is a young midfielder that came through their own youth. He is currently recovering from a knee operation.

Ben Fowkes was signed initially on loan from Braintree in September and has quickly become another prolific scorer. A talented striker who was previously at Needham Market too

Centre back Josh Okopolkpo arrived in September too. His yet to make his first start and was previously a Huddersfield Town junior.

Midfielder Jake Spooner was a pre-season arrival from Harleston Town and has played for Beccles Town too.

Reserve keeper Sonny Wright is a former Rushden & Diamonds player and finally Iuri Mendes-Fernandes is a midfielder who has been at Leiston for a couple of season.

Kick off 12:30pm at the Don Amott Arena, so there’s plenty of time to get from the Pride Park early kick off.