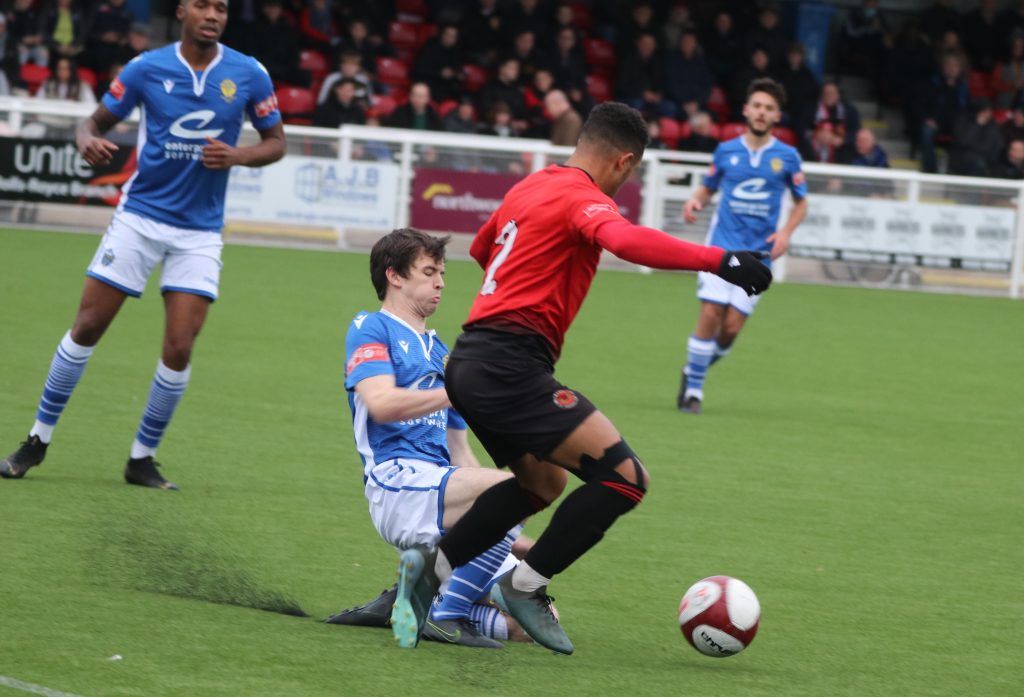 It’s been said a number of times already this season, but Saturday’s home game against Warrington proved to be another game of two distinct halves.

The game started strongly for Mickleover with Arlott-John threatening in the box after only three minutes before Dan Atherton in the visitors goal cleared for a throw.

Two minutes later Bennett had dropped a telling ball into the box, from which Beavon half connected with a shot at the keeper again. 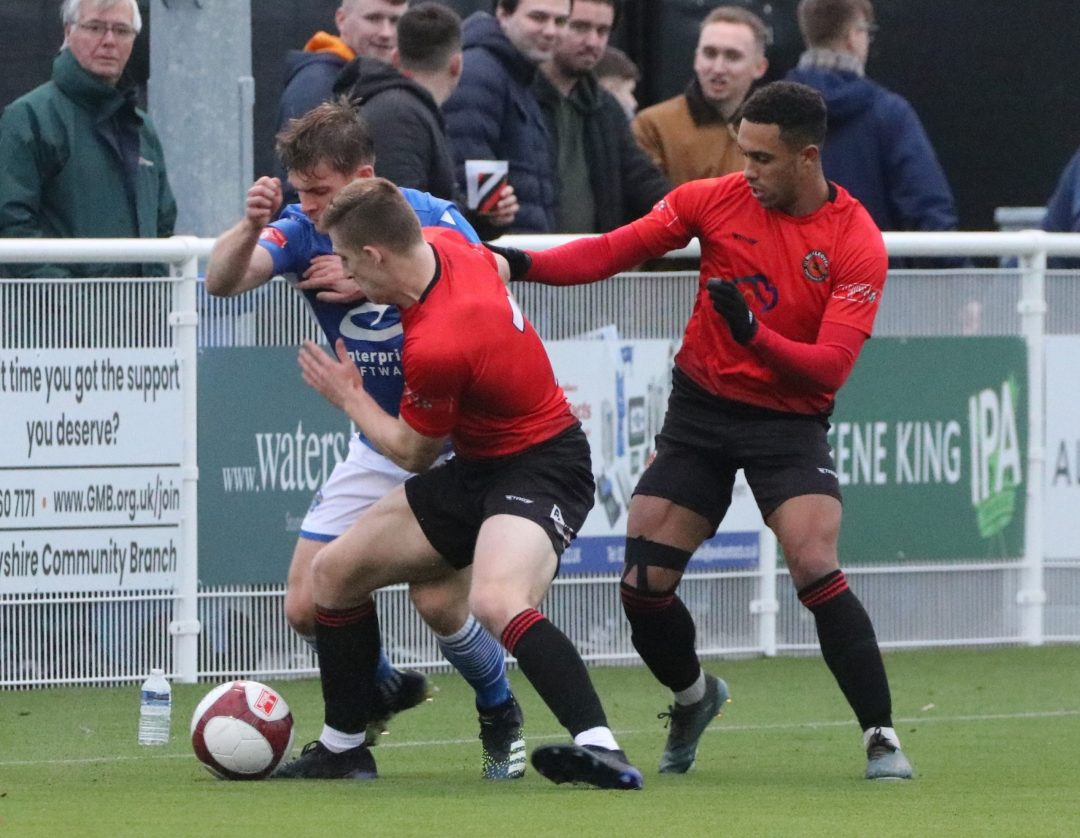 From the clearance Warrington had their first attack, with Mols crossing to find Grivosti who headed over the bar.

Mickleover had the edge in midfield, with Warren in command, ably supported by Agustien and Bateman,

Beavon was looking to go on a run after seven minutes, but was fouled on the halfway line, but only two minutes later it was 1-0 to Sports, Warren had found Arlott-John again, he turned and shot but his initial attempt was blocked, before Baillie cleared an attempt from Beavon off the line.

The ball then found Walters lurking just outside the area and the on loan striker smashed a crisp and firm shot into the top right hand corner, with keeper Atherton well beaten.

As Warrington started to push forward to seek the equaliser, Hawkins covered a half chance, before Butler blocked a 16th minute shot.

The pressure was on and over a three minute period, Grivosti shot straight at Hawkins, Baillie fired over from long range and Reid created his own space before putting in a weak final effort. 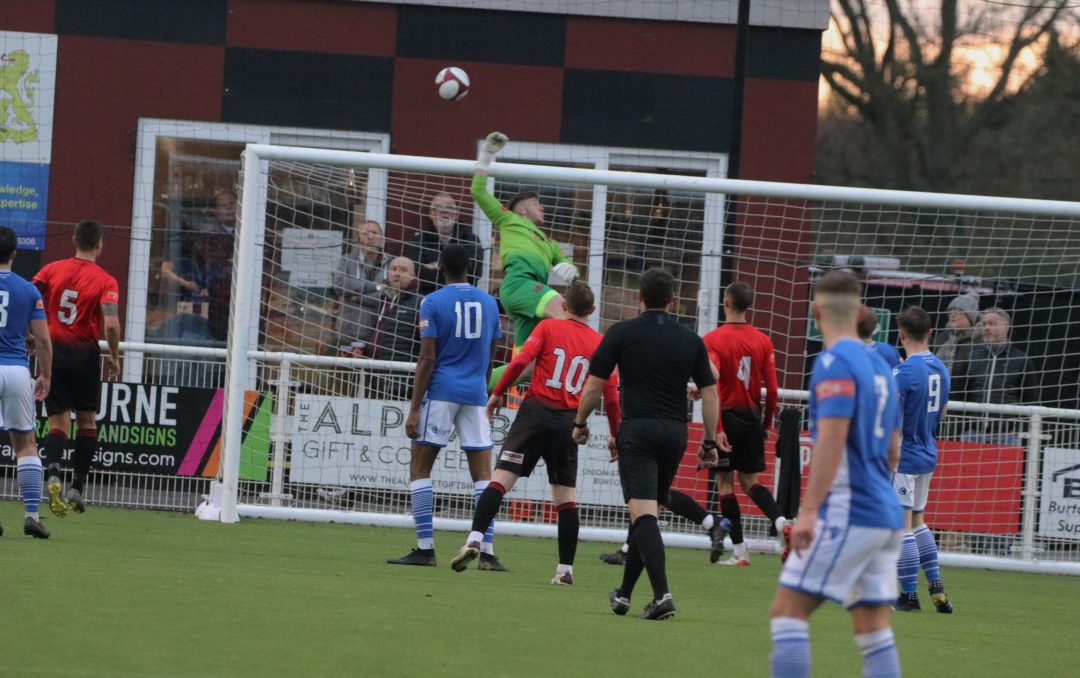 But Mickleover came fighting back with more determination than has been seen of late, as Bateman put a nice ball through to Beavon, whose shot was blocked again, but earned a corner.

Agustien’s kick found skipper Watt, who turned to fire a strong shot just over the bar after 22 minutes.

Watt was in particularly good form backed up well by Butler, while both Bennett and Gough played more of a defensive wing back role than pushing forward.

Warren tried a random shot from well out after half an hour, which was well over the bar, but Warrington were still pressing and began to look vulnerable in defence themselves.

Baillie tried another long shot for the visitors which was well over, but in the 36th minute Duggan failed to clear his lines and Arlott-John intercepted.

Atherton was quickly out of his goal, but Arlott-John took the ball around him and squared it back from the by line. There were defenders on the line, but Walters smashed in his second of the match, 2-0.

Grivosti went for his Oscar though after a challenge with Watt as half time approached, but Hawkins had to make one more save before the whistle, tipping over from a Williams shot.

The second half was barely underway when appeals for a penalty were rejected when Arlott-John was upended.

Gough then had a positive attack down the left, feeding Beavon, whose header was just over, while after five minutes Arlott-John had another strong run and was close to breaking through the Warrington defence again and all inside a five minute opening spell.

But the tide then turned with Grivosti’s initial effort punched out by Hawkins, only to find Williams, who fed Duffy to make it 2-1.

It was still fairly even still and Arlott-John went close again after 58 minutes with a spectacular overhead kick.

Mols then got over ambitious and lost possession for Warrington, only for Grivosti to intercept again and shoot over the bar.

Gough headed clear after the visitors had a dangerous free kick and Arlott-John was taken down again in the 63rd minute, but Agustien’s free kick went wide.

Warrington were almost on equal terms when they got a break after a Bateman shot was blocked. Hawkins had to come racing out to go one on one with Reid, but despite putting it around the keeper, Watt was on hand to clear.

Only a minute later it was 2-2 after Williams’ kick pierced the Mickleover lines.

Mickleover made their first change when Dales came on for Arlott-John, but Warrington had started to take control in midfield and left the Mickleover’s defence looking vulnerable.

Walters had another half chance but fired well wide, before Williams tried a lob for Warrington equally wide of the mark.

Bateman lost possession on the left which allowed Warrington sub McDonald a run. But he failed to maximise his opportunity and shot straight at Hawkins.

Into the last 15 minutes and Beavon was blocked as he prepared to shoot, but it was the visitors that were looking more dangerous.

Agustien had a pot shot well wide, before Davidson-Miller came on for Walters.

Warrington continued to seek the winner and after 84 minutes they had a shot cleared off the line, before Watt was outpaced by Mackreth, but there was no one to receive his cross.

Hawkins had to pull off another acrobatic save from a Duggan shot, before Mickleover almost got a break too with two minutes on the clock. But Davidson-Miller’s charge was stopped with Atherton charging from his goal.

Watt made a final headed clearance to retain the hard fought point, but Warrington’s second half fight back had proven just too strong for the battling Mickleover side.