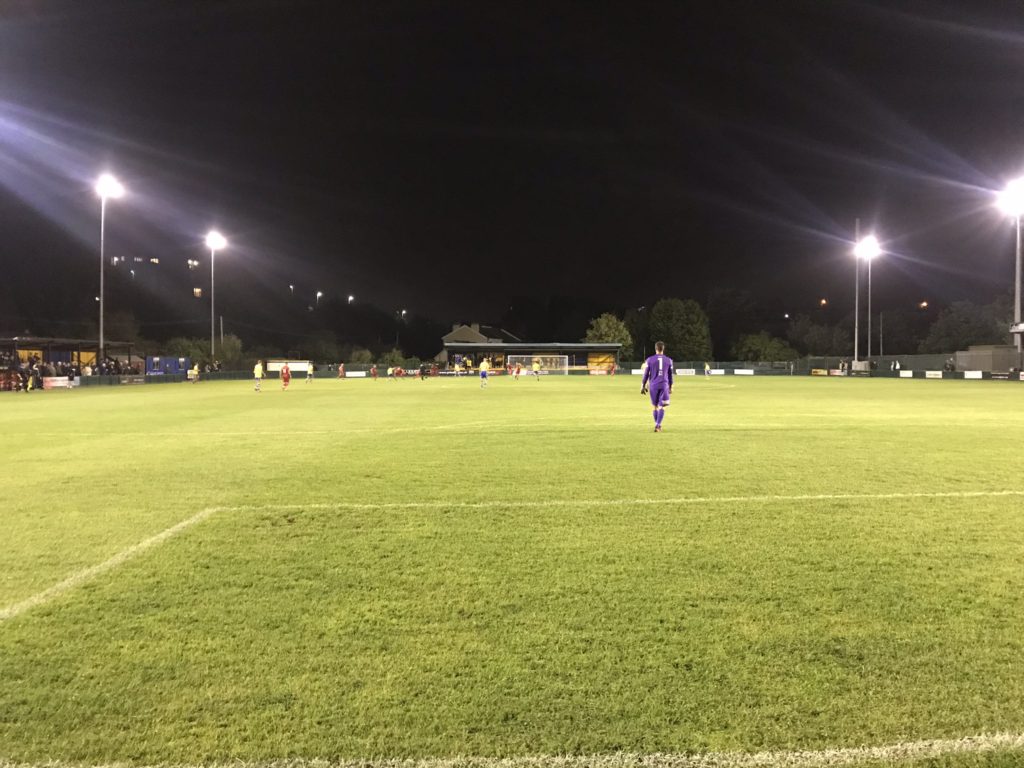 Mickleover Sports misery on the road in the league continued as they suffered an unfortunate 1-0 defeat away at high-flyers Warrington Town. A 6th minute goal from Dylan Vassallo was all that separated the two sides on the night but Sports certainly had chances, especially in the second half, to get something from the game but it just wasn’t to be as Sports came home from another away trip with nothing to show for their hard work and effort.
Sports lined up with Lewis King in goal and a back four of Jake Scott, Pablo Mills, Ben Turner and Mason Warren. In midfield were John McGrath, Ricky Ravenhill with Ted Cribley and Jimmy Phillips on the wings. Up front were he duo of Evan Garentt and Nathan Jarman. On the bench were Tyreece Robinson, Isai Marselia, Lewis Belgrave, Oliver Roberts and Curtis Burrows.

It was a bad start to the game for Sports as six minutes in Sports fell behind. The ball fell to Dylan Vassallo who took his effort well with a hard and low drive into the bottom left corner past King. Sports then started to have a few efforts of their own with McGrath having two efforts with one going over the bar and one going just wide of the right hand post. Then striker Nathan Jarman dinked a lovely volleyed effort over the bar which had the keeper worried. However it was Warrington who had the final couple of efforts before the half time break. First Tony Gray was played in 1v1 with King but he somehow missed what seemed an easy effort past the right hand post before a header from Jake Kirby went put over the bar.

The second half started well from a Sports point of view as a strike from McGrath was deflected out to Ted Cribley whose effort was saved and parried away from danger by Warrington keeper Tony McMillan. Jarman then had an effort from long range saved by the keeper then Jake Kirby also had a strike saved by King. A good cross from Jimmy Phillips was perfectly placed into the danger area but no one was there to get onto the end of it and the ball went out for a goal kick. Nathan Jarman then had two more efforts to try and grab a Sports equaliser. The first from a corner kick from McGrath went over the bar before free kick from Lewis King met the head of Jarman but was saved by the keeper. Jarman then made way for Sports only chance of the game as the forward was replaced by Isai Marselia.

There would be one final chance for Sports and it was probably the best one of them all. A cross into the Yellows box was met by a header from Evan Garnett from only a few yards from the goal but the effort was over the bar as the Sports forward showed his frustrations knowing it was Sports last chance to salvage something. That would prove to be that as the referee blew for full time. With rivals Matlock Town winning their crucial relegation six pointer with North Ferriby United as well that left Sports only 2 points above the drop zone in 19th position, with the Gladiators having a game in hand. But for now Sports have to put their league troubles aside as they prepare for one of the biggest games in their recent history as they welcome Alfreton Town to the Don Amott Arena. Mickleover have the chance to progress into the 4th Qualifying Round for the first time in their history on Saturday 6th October 2018 with a 3pm Kick Off.