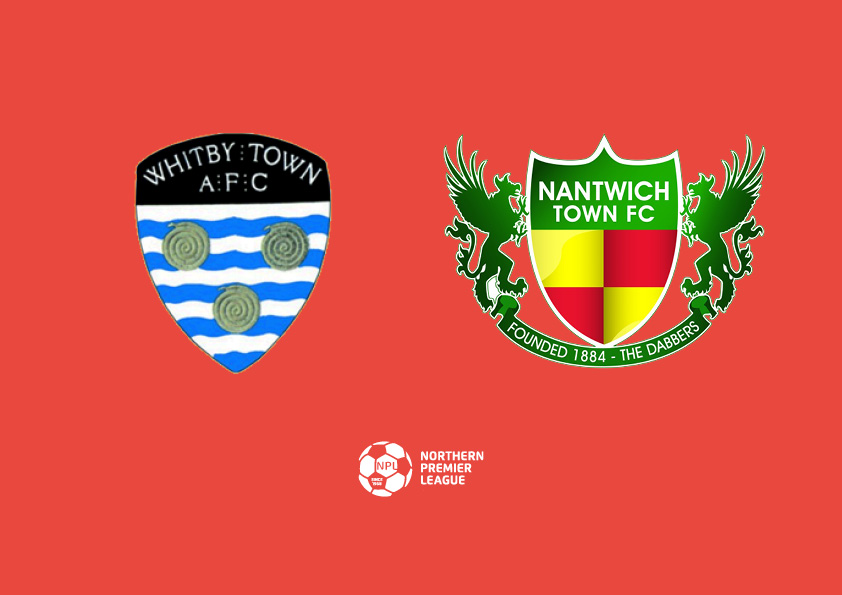 It’s  Mickleover’s turn to host their next two NPL matches, with Whitby Town on Saturday and Nantwich on Tuesday.

Whitby are currently fifth in the table having beaten Nantwich and Morpeth at home and Lancaster and Ashton away, suffering the one defeat at Gainsborough, when they went down 1-0.

They are currently without skipper Daniel Rowe, after he broke his nose in the win against Morpeth.

Former Mickleover striker Jacob Rowe has been finding the net for Whitby, having signed last year from Frickley. He was a Chesterfield Academy player and ahs also played in Norway.

His co striker Bradley Fewster is yet to find the net this season, having come from Blyth Spartans back in 2019. He was capped at under 19 level by England and played at Preston, York and Spennymoor.

Their newest singing is midfielder Jake Hackett, recently released by Sunderland, he was previously on loan at Whitby.

Tuesday’s opponents Nantwich Town have had a similar start to the season as Mickleover, with three wins and four defeats, placing them 12th in the league.

They lost at home to Hyde on Tuesday evening, but are still in the FA Cup.

Let’s take a look at their squad.

He joined the Dabbers this summer after a season with Widnes. After a
very promising pre-season he was awarded the number 1 shirt for
the start of the season.

TROY BOURNE (Defender)
A graduate from the Dabbers’ youth team, having impressed former manager Phil
Parkinson in 2015/16 pre-season training. He spent much of the 16/17 campaign on loan at Alsager Town but did make a couple of first-team appearances for the Dabbers. Now a regular in the centre back position but can also play at right back when required.

JOSH LANGLEY (Defender)
A summer of 2019 signing and a defender who is great with the ball at his feet and has an excellent reading of the game, and as a former captain in a higher division,.

BEN HARRISON (Defender)
He re-joined the club in the summer of 2019 after a two-year stint with Altrincham, where he not only won the Northern Premier Division in 2017-18, but helped the Robins reach the National League North play-offs the following season.

JOEL STAIR (Defender)
Cam to the Dabbers in 2016 after impressing at North-West Counties Football League side Hanley Town. A warrior in defence, winning the club’s Player of the Season in 2017-18 and captaining the club on several occasions. Hel can play across the back four, with his main strength being at centre-half, but also  fill in at right-

MATTY DEVINE (Defender)
Matty switched Cheshire allegiances in the summer of 2019 as he joined the Dabbers from Witton Albion. An attacking full-back, Matty offers a huge threat going forward but is equally as effective at the back.

Jack HATTON (Defender)
Jack joined the Dabbers from Widnes in the summer. The young full back has good pedigree spending his youth at Bury FC and is able to play both left and right back. He had hoped to play for Ytterhogdal in Sweden, however due to the pandemic despite moving and training there didn’t play. He returned to England and signed for Widnes in August 2020.

CASPAR HUGHES (Midfielder) Caspar re-joined the Dabbers from AFC Fylde at the start of the 2017-18 season, before being named captain in January 2018 after the departure of Sam Hall. While Caspar is an excellent ball-winner in midfield, the skipper can also play at full-back. He started at Crewe Alexandra youth academy before joining
Nantwich, where he spent two solid seasons before moving on to Fylde. The midfielder
helped Fylde gain promotion from both the Northern Premier League and the National
League North.

SEAN COOKE (Midfielder)
A productive attacking midfielder, Sean is the son of manager Dave and is a dynamic threat from his number ten role. A danger from set-pieces – especially free-kicks – Sean has a keen eye for goal and has proved that not only with Nantwich but at other clubs higher up the non-league pyramid. He played witn Caspar Hughes, at the AFC Fylde
side that won promotion from the Northern Premier Division, butd has also played for FC
United of Manchester.

DAVID WEBB (Midfielder)
David joined the club after impressing in 2019-20 pre-season. A midfielder
capable of filling in across the pitch. He also has Northern Premier League
experience withr Marine, and has also played for the Royal Air Force’s side.

CARLOS “THOMMY” MONTEFIORI (Midfielder)
The young Argentinian winger signed for Nantwich in February 2021 after turning 18. He has been a local resident with his family in Chester for the last couple of years and was spotted and invited to Nantwich and subsequently signed. He started at the famous All Boys FC in Buenos Aires.

.
PRINCE HAYWOOD (Midfielder)
A signing from fellow Premier Division club Radcliffe in January 2020. Ghanaian born,
Prince previously played in Italy and has had spells with several different clubs in the North West at the non-league level, having played for Stalybridge Celtic, Colwyn Bay and Witton Albion.

JOE MWASILE (Midfielder)
A powerful winger with pace to match anyone in the league, He joined the club in 2016-17 originally after starting the campaign with Marine. He left at the end of that season to join fellow Cheshire outfit Warrington Town but re-joined the Dabbers in October 2017. A former Morecambe Academy Graduate.

LUKE WALSH (Midfielder)
He joined the club in the winter of 2018-19 after impressing for Eccleshall in the North-West Counties Football League and made a solid step up to the Dabbers’ level, holding his own against EFL League Two outfit Crewe Alexandra in his debut. A wide player who can also play through the middle, Walsh is another product of the Crewe Alex academy.

SHAUN MILLER (Forward)
Her started his career with Crewe Alexandra’s youth system, and he signed a professional contract with the club in July 2006. He made his first-team debut in November 2006 in a 4–0
FA Cup loss to Bradford City at Valley Parade. Shaun was with Bolton Wanderers recently scoring his 100th career goal and achieved promotion with the Trotters last season. He signs for Nantwich Town with a vast amount of league experience and a scoring threat.

JOE MALKIN (Forward)
Son of former Tranmere Rovers striker Chris, he joined the club at the beginning of the 2018-19 season from North-West Counties Football League side Cammell Laird 1907 and enjoyed an exciting first season, where he won the Northern Premier League Young Player of the Season.

CONNOR HEATH (Forward)
A new signing in the summer after being released from Crewe Alexandra,
after impressing during his 2-year scholarship period with a number of goals he signed a
professional contract in the summer of 2019.

IBRAHIMA SY (Midfield)
Loan signing from Stoke City, he moved to the Potters from Stade Reims in France and
has playing in the Under 23’s for Stoke. A tall defensive midfielder  looking to impress his parent club during his loan spell here at Nantwich.