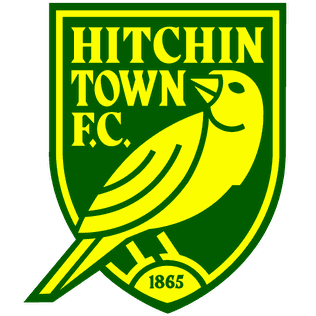 Hitchin Town are one of the few teams we have played competitively, sadly going down to them a couple of seasons back in the FA Trophy.

They were formed back in 1865 and their Top Field Stadium has a 4,554 capacity with a grass pitch. It wasn’t the best of 21/22 seasons for them however, finishing down in 17th place.

Manager Mark Burke has been with the club since signing from QPR in 1985. After over 700 appearances he retired from playing and his been in charge since 2014.

First choice keeper Charlie Horlock has been with the club for three years, since arriving from Hastings Utd. It’s his third spell at the club having started out at Stevenage.

Josh Mollison is Academy coach as well as reserve keeper, he is dual registered with Eynesbury Rovers.

Former Luton Town junior keeper Tiernan Parker has also played in recent friendlies, having a loan at the club a couple of years ago. He is a Northern Ireland Under 15 & 17 International.

Central midfielder Josh Coldicott-Stevens started out at Boreham Wood, but came to Hitchin from Kings Langley in December 2019.

Stan Georgiou is a young defender just breaking into the squad from their own Academy, whereas centre back Ciaren Jones is a former Luton and Norwich junior, who’s returned for a second time from Gloucester City.

Midfielder Josh Popoola continues the list of returnees, along with defensive midfielder Lewis Barker who came from Baldock Town in 2019/20.

Rio Da Silva is another midfielder. A former Luton and Chelsea youth player, he arrived from Dunstable three years ago.

Midfielder Kye Tearle made his first team debut last year and can also play right back, while Jake Bunyan is another right back who has come through the junior ranks at Watford and Stevenage.

Experienced midfielder Steve Gleason was signed from Hemel last November, but from Wolves Academy he has numbered MK Dons, Birmingham City and Aberdeen among his former clubs.

Midfielder Finley Wilkinson is one of two new signings. He has come from Histon, while striker George Devine has arrived from Biggleswade.

One of our nearer neighbours is Tamworth have retained  11 of last years squad, including former Mickleover loan striker Dexter Walters.

Manager Andy Peaks has been busy wheeling and dealing too with new signings.

Right back Matt Curley and midfielder Ben Milnes have both arrived from Buxton, midfielder Kyle Finn from Halesowen, striker Ty Deacon from Kettering and finally midfielder Alex Bradley. He is an ex West Bromwich Albion midfielder, capped by Finland at Under 16, 17 and 19 levels.

Finally Royston Town play at Garden Walk with a grass pitch and can accommodate 1,980.

Manager Steve Castle took them to eighth in the table last season and one of his first re-signings was 21-22 player of the year right back Ronnie Henry. The Spurs junior is an England C International.

It’s not long now before we will know our first opponents, as the seasons league fixtures are due to published on the website at midday.